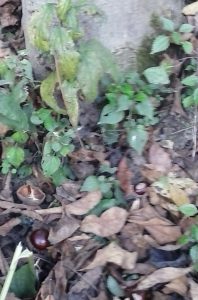 Last week when I was checking my cows, one was resting peacefully down in a ravine and for some reason I decided to get her to move. That’s when I realized something was really wrong.

She got up but had no balance, like she was really drunk and after twenty minutes of trying to help her, I finally got her up and out of the ravine. She seemed really weak on the legs, especially the back ones. When she laid down, she went on her side with her head on the ground pulled back and legs straight out with some muscle twitching.

When this happens to one cow, you get very concerned. When it happens to two, you panic. That happened the next morning. The second one was in a bad spot near a cliff and my son and I worked to get her to a soft, shaded, level spot.

After searching for some possible causes and talking with our veterinarian and ruling out many possible problems, we determined it was most likely buckeye poisoning. The first animal got better but I was sure the second one was bad enough to die. Regardless, my veterinarian, Dr. Groah, said not to give up, he’d seen some in really bad shape recover. The next day we tubed the second cow with some water and electrolytes, and gave her a laxative to help pass the poison, and she got up later that day. I thought we were out of the woods but we had another case over the weekend and that cow almost drowned in the creek due to her lack of coordination, but is now better. To date, a neighbor has had a similar experience with one of his cows, and each of the four cows appear to be recovering. 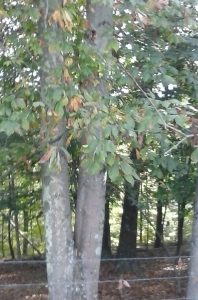 Buckeye nut production in Morgan County seems to be particularly heavy this year.

In over 40 years of raising cattle, this is the first time I have had it on the farm. Maybe we are getting more buckeye trees. All parts of the buckeye trees are toxic but I think this year’s nut crop is large as well. According to A Guide to Plant Poisoning of Animals in North America (2001), the principle toxins are the glycosides aesculin and fraxin, and possibly a narcotic alkaloid. Animals develop signs of poisoning 16 hours after consuming toxic quantities. As little as 0.5% body weight of the animal can produce severe poisoning.

I am not aware of any specific therapy for buckeye poisoning, but laxatives may be given to remove the ingested plant parts as fast as possible, and if the animal is down for an extended period, keeping the cow hydrated is important. Unfortunately, I have buckeye trees in every paddock so I will have to keep a close eye on the cows for a while and try to figure out what the long term solution will be to prevent this from happening again.