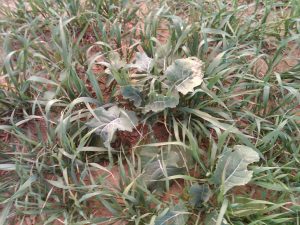 Cover crops can recapture nutrients in livestock manure and keep these nutrients from escaping. (oats and rapeseed in this photo)

Fall manure application is underway across the state. Livestock producers and commercial manure applicators are applying manure to fields following corn silage harvest and will soon be applying to harvested soybean and corn fields.

To best capture the nutrients in manure, livestock producers should incorporate fall applied manure and also consider using cover crops. Pen pack beef manure will contain approximately 7.9 pounds of nitrogen per ton (mostly in the organic form), while liquid beef manure from a slatted barn can contain 30 pounds of ammonium nitrogen and an additional 25 pounds of organic nitrogen per 1000 gallons. Most swine finishing manure contains more than 40 pounds of ammonium (NH4) nitrogen per 1,000 gallons and dairy manure, from facilities bedded with sand, can contain more than 15 pounds of ammonium nitrogen per 1,000 gallons. When Ohio experiences a warm winter or delayed wet spring planting season, much of this nitrogen is converted to the nitrate form (NO3) by soil bacteria and lost through leaching or denitrification before the following crop season begins.

Fall cover crops have been planted in Ohio for many years. While primarily used to help control soil erosion, cover crops can also recapture nutrients in livestock manure and keep these nutrients from escaping into lakes, streams and rivers. In one study, OSU Extension researchers found a cover crop de­creased the nitrate nitrogen NO3 concentration in manure amended soil compared with the control soil by more than 70% before the field froze in the fall. This would have primarily been nitrogen that soil bacteria converted from the ammonium form to the nitrate form after it was land applied.

Cereal ryegrass is the best cool-season grass for capturing excess nitrogen. Because rye over-winters, research has shown it can capture and hold 25 to 50 pounds of nitrogen (organic form) per acre. It germinates at temperatures as low as 34 degrees so can be seeded later than oats. However, less nitrogen will be captured the later the rye is seeded. It will grow later in the fall and begin growth earlier in the spring than wheat. The organic nitrogen stored in the plant will eventually be released as ammonium nitrogen when the plant dies.

Farmers have also used radishes, wheat, clover, annual ryegrass, or almost anything they are comfortable growing. Oats are sometimes used as a cover crop in the fall and need to be planted soon after silage harvest. Drilling oats improves germination and growth before frost. Some farmers in northwest Ohio have had great success surface seeding oats and incorporating with shallow tillage or even with land leveling the fields in August. Oats winter-kill and are not a problem in the spring for no till or minimum tillage systems.

Cover crops can help livestock farmers recapture manure nutrients and conserve soil by reducing erosion. Cover crop seedings do not have to be perfect. The goal is to combine nutrient recovery and protecting the environment.