The media generally focuses on the headline GDP (gross domestic product) number that comes out every quarter. And as of late, the focus has been, and will continue to be, on whether we can consistently achieve 3% growth in the U.S. economy.

However, what’s more interesting are the various contributors to GDP. Similar to last week’s Industry At A Glance, there are some interesting trends occurring underneath the headline number. And those trends have some implications with respect to rural America.

This week’s illustration highlights the contribution to GDP made by private, fixed investment (non-residential) in the U.S. economy. That contribution has been waning during the past several years. Note that this portion of the economy peaked in the third quarter of 2014 at 1.31%.  Since that time, there’s been a steady decline. In fact, the one-year moving average hovered at or below zero during the last half of 2015 and for the entire year during 2016. 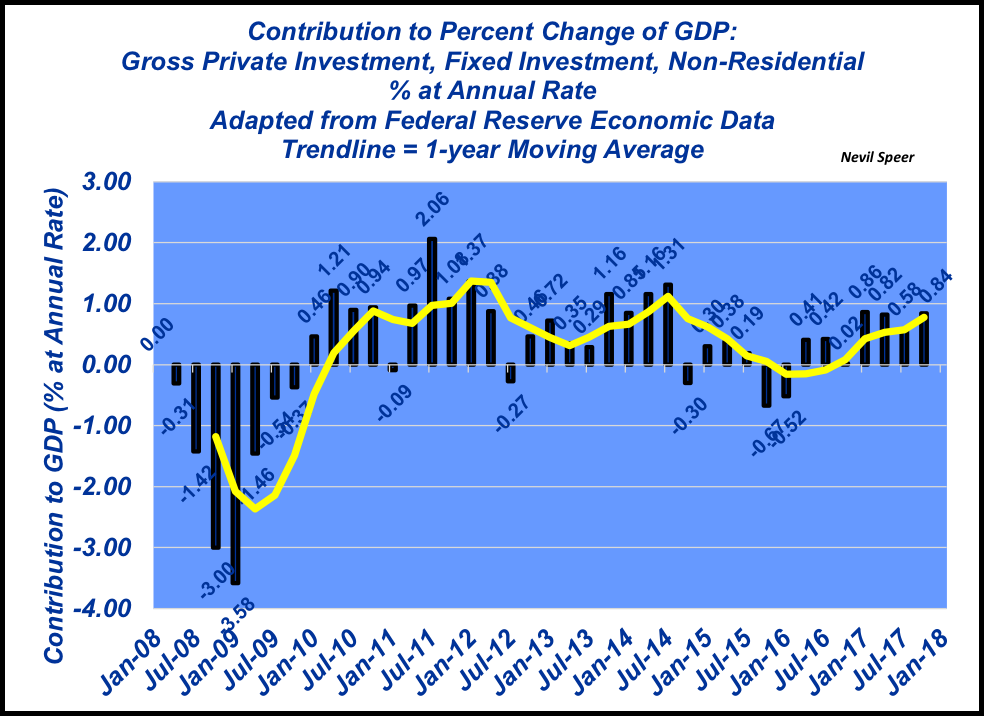 In other words, private companies were not investing in the U.S. economy. Meanwhile, fixed investment has seen a sharp uptick during the past four quarters—all of 2017. The fourth quarter of 2017 saw total GDP pegged at +2.6% — private investment represents nearly one-third of those gains. Businesses are beginning to make sustained investment in their operations. That’s a positive sign for the economy over the long run.

All of this has implications for rural America. These same trends are likely reflected back at the farm and ranch, although we don’t get a snapshot of those numbers specifically. How does this trend reflect your business? Have you, or are you, making plans to make fixed investment in your operation? Have you seen signs of these trends either by your neighbors or in your local area? Leave your thoughts in the comments section below.