What’s the difference between high, medium and low-profit producers?

It’s an unfortunate fact in cow-calf production that some producers seem to be profitable most of the time, even a downturning market, while others seem to struggle every year.

There are a number of reasons for that, including the cattle cycle, but regardless, the end result can be dramatic. Figure 1 shows that the economic returns to beef cow-calf producers vary considerably over time. The record high average return in 2014 was a result of a drought and strengthening beef demand.

Although beef demand has been relatively strong in 2015 and 2016, herd expansion has led to larger supplies, lower cattle prices and lower returns to the cow-calf enterprise. The 2012 to 2016 Kansas Farm Management Association summary of data from cow-calf enterprises has lessons for producers given the wide range of variability inherent to this industry. 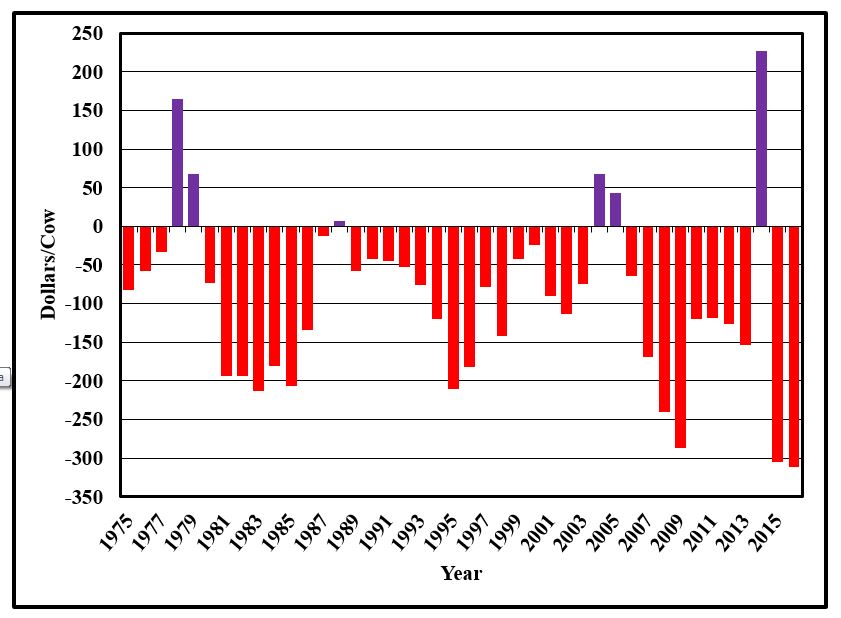 For example, over the last 42 years there has been an average $233 difference in net returns per cow, between the good (top 1/3) and the bad (bottom 1/3) years. This is a big variability, but unfortunately this risk is difficult to manage because much of it is due to factors and conditions that are typically beyond the control of individual producers.

This analysis suggests that while both price and weight of calves do impact profit, they are much less important in explaining differences between producers than costs. In the data analyzed here, economies of size exist such that larger operations tend to have lower costs and hence are more profitable than smaller operations.

However, it is important to point out that being a large operation does not guarantee low costs and high profits, as a number of mid-sized to smaller operations were cost competitive. Operations that have higher labor allocation in the cowherd enterprise, relative to crop enterprises, tended to have lower costs and be more profitable.

There is tremendous variability in costs and returns across producers, which means there is room for producers to improve their relative situations. However, before one can improve, they need to know where they stand relative to other producers. Thus, benchmarking and identifying an operation’s strengths and weaknesses is the first step to deciding where to focus management efforts.

Pendell and Herbel are ag economist at Kansas State University