Normally, the EPDs of animals from different breeds cannot be compared because most breed associations compute their EPDs in separate analyses and each breed has a different base point. Thus, EPDs are generally only comparable within breed because of differences in the genetic base.

To bridge this gap, the U.S. Meat Animal Research Center (USMARC) has produced a table of factors since 1993 to adjust the EPDs of cattle so that the merit of individuals can be compared across breeds. Adjustment factors for carcass traits have been calculated since 2009 and carcass weight was added in 2015; to be included, breeds must have carcass data in the USMARC database and report their carcass EPDs on an actual carcass basis using an age-adjusted endpoint.

Related: Should you make maternal or terminal matings?

Bulls of different breeds can be compared on the same EPD scale by adding the appropriate adjustment factor to the EPDs produced in the most recent genetic evaluations for each of the 18 breeds. The across-breed adjustment factors (AB-EPDs) allow producers to compare the EPDs for animals from different breeds for these traits; these factors reflect both the current breed difference (for animals born in 2014) and differences in the breed base point.

The AB-EPDs are most useful to commercial producers purchasing bulls of more than one breed to use in crossbreeding programs. For example, in terminal crossbreeding systems, AB-EPDs can be used to identify bulls in different breeds with high growth potential or favorable carcass characteristics.

The AB-EPD factors have traditionally been derived and released during the annual Beef Improvement Federation (BIF) conference each year. However, starting this year, we are updating the factors late in the year to make the factors more accurate during spring bull buying season.

The factors are derived by estimating breed differences from the USMARC germplasm evaluation program and adjusting these differences for the EPDs of the sires that were sampled in the system. The traits for which factors are estimated are birth weight, weaning weight, yearling weight, maternal weaning weight (milk), marbling score, ribeye area, backfat depth, and carcass weight (Table 1). These factors adjust the EPDs to an Angus base (chosen arbitrarily). 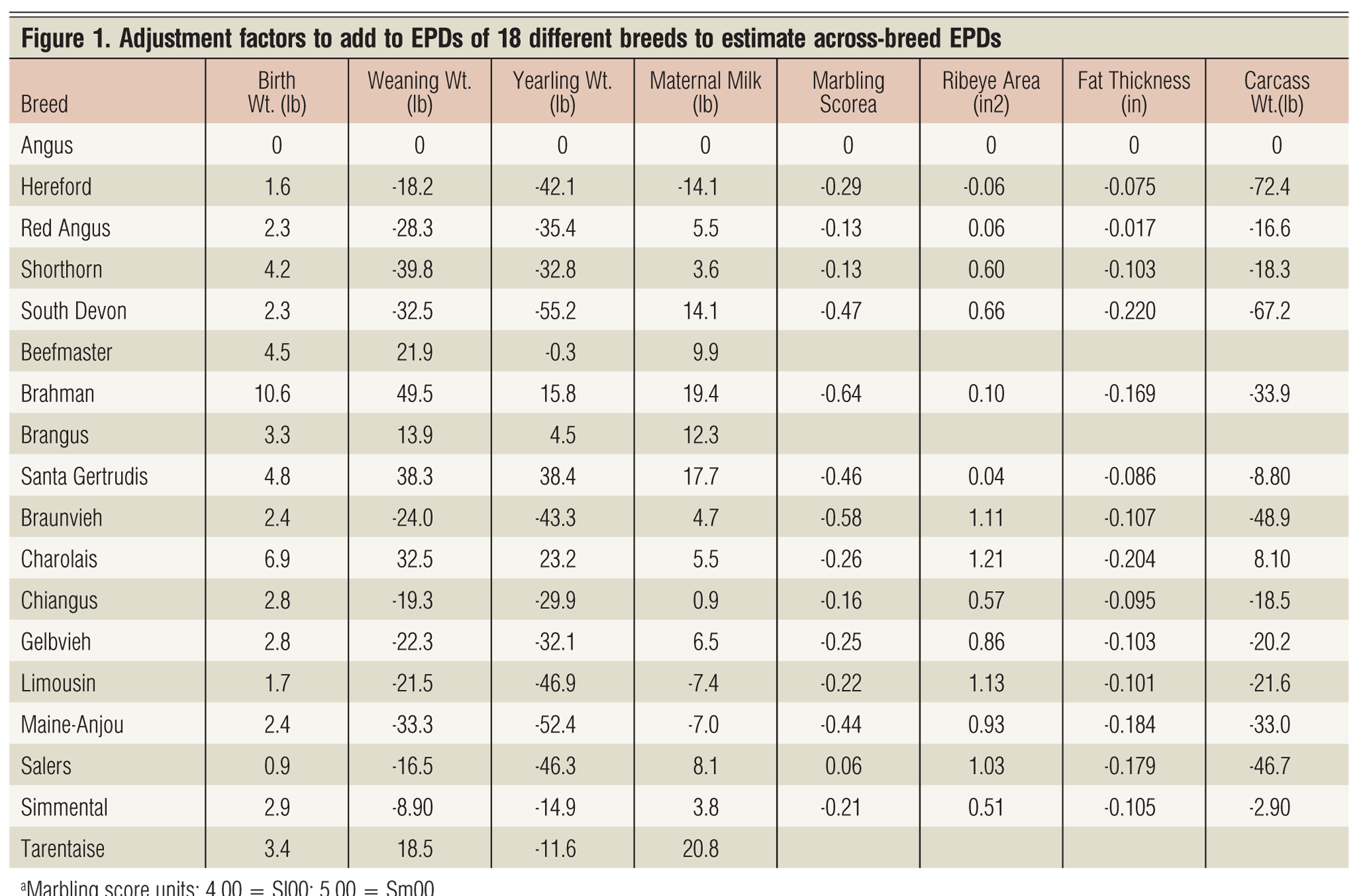 It is important to note that the table factors (Figure 1 1) do not represent a direct comparison among the different breeds because of base differences between the breeds. They should only be used to compare the EPDs (AB-EPDs) of animals in different breeds. To reduce confusion, breed of sire means (i.e., one half of full breed effect; breed of sire means predict differences when bulls from two different breeds are mated to cows of a third, unrelated breed) for animals born in 2015 under conditions similar to USMARC are presented in Figure 2 2.

The adjustment factors in Figure 1 were updated using EPDs from the most recent national cattle evaluations conducted by each of the 18 breed associations, current as of December 2017. The breed differences used to calculate the factors are based on comparisons of progeny of sires from each of these breeds in the Germplasm Evaluation Program at USMARC in Clay Center, Neb. 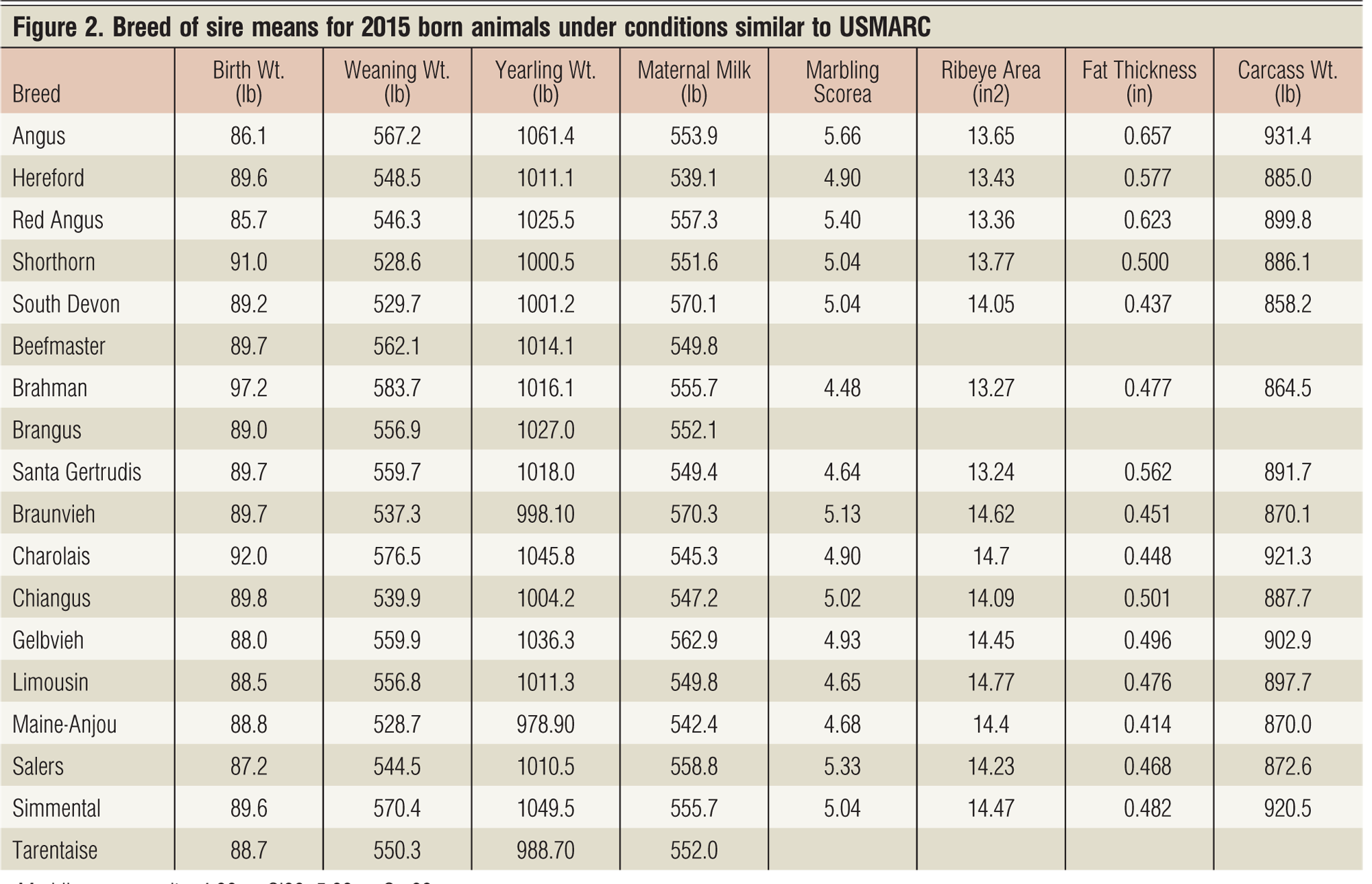 Improvements to the AB-EPD system

In 2016, BIF formed a working group of scientists, Extension specialists and breed association representatives to evaluate the AB-EPD system. Their main objectives were to discuss the AB-EPD system in relation to the multibreed NCE performed by International Genetic Solutions (IGS) and to set targets for future releases and implementation of the AB-EPD factors.

Multibreed evaluation has long been a goal of the animal breeding community in the United States. The aim of such an analysis is to produce sets of EPDs that are directly comparable across breeds participating in the system without the need for AB-EPD adjustment factors. An additional important benefit is producing EPDs for a large network of seedstock breeders (from multiple breeds) in a single evaluation.

However, even when using multibreed evaluation models, producing EPDs that are comparable across breeds is only possible if sires from the breeds are either directly compared to one another (e.g., progeny in the same contemporary group) or indirectly compared (e.g., sires are compared through a common reference sire).

As of this writing, we still show differences in AB-EPD factors of the breeds that participate in the IGS multibreed, indicating that they may not be on the same base. The BIF working group recommended continuing to produce separate, breed-based, AB-EPD factors rather than one factor for all breeds in the system.

The BIF working group recommended a plan to begin releasing the AB-EPD factors near the end of each year to facilitate the use of these tools during spring bull buying. Additional updates may be released throughout the year, particularly if breeds are aware of significant changes to their evaluations, such as base adjustments.

From summer of 2017 through early 2018, we are aware of several changes to NCE that have or will be taking place. For instance, the American Angus Association has begun using a single-step procedure to incorporate genomic information into their NCE as of July 2017 and the American Hereford Association began incorporating genomic information using a different single-step BOLT model.

In addition, both of these breeds made other changes to the variance components used in their respective NCE. Based on these changes, we began examining methods to reduce the impact of genetic trend on the breed estimates from the ABEPD system. These new factors are based on breed differences from USMARC data recorded since 1999 (hence progeny from a more ‘current’ set of industry bulls).

In addition, the NCE produced by IGS will also change how genomic information is incorporated in the near future with the use of BOLT software. Because of these changes, we delayed the release of these factors until this point in the year. We expect to have another release in 2018 once the new EPDs from IGS using BOLT have been released.

Future changes to the ABEPD system involve the production of a dedicated web-based system where breeds and USMARC can independently update EPDs/data to make changes in these factors in real time. Ideally this web-based system could be part of a larger decision support system to aid commercial producers in their bull buying decisions.