COLLEGE STATION – Cold temperatures should not negatively impact Texas crops and could benefit some, according to Texas A&M AgriLife Extension Service experts. 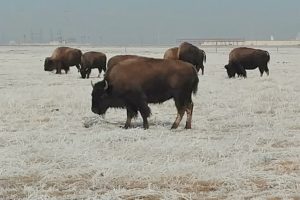 Livestock, like these domesticated buffalo near Amarillo, had to contend with frozen pastures when the winter blast dropped temperatures into the teens and lower. (Texas A&M AgriLife Extension Service photo by Kay Ledbetter)

Less than halfway through winter, most of the state has already experienced temperatures below the average value for the coldest day of the year, but only by a few degrees, said Dr. John Nielsen-Gammon, state climatologist, College Station.

January is the coldest month on average for Texas, and 2018 has started as one of the coldest in almost 20 years.

Waco reported the most extreme temperature based on annual averages, he said. In an average year, the temperature reaches 16 degrees, but this year it has already been as cold as 12 degrees.

“The minimum temperature so far places this winter among the five coldest winters since 1989-1990 across the entire northern half of the state, though the December 1989 cold snap would put them all to shame,” he said.

Follett, near the Oklahoma border in the northeast corner of the Panhandle, reported the state’s lowest temperatures to date, minus 4 degrees. Tulia, just south of Amarillo, reported minus 1 degrees, while Decatur, northwest of Fort Worth, reported 4 degrees.

Temperatures reached 15 degrees in Austin and 21 degrees at Eagle Pass in South Texas, Nielsen-Gammon said. He said it looks like the state will remain in a cold, dry weather pattern until at least the middle of January, though not quite as cold as it has been.

Cold conditions may benefit some producers and hurt others, but dry conditions are the top concern for producers in some Texas regions, climatologists said.

Fresh-market spinach, broccoli and cabbage were being harvested after temperatures reached 20 degrees in Uvalde, he said. Those crops should sustain minimal damage.

But other produce in South Central Texas may show tip burn or browning of leaf tips, which occurs when water rushes from leaves as the plant tries to avoid a hard freeze, Stein said.

“After the warm-up, you could see some of those plants showing tip burn,” he said. “Most plants here were pre-conditioned for the cold, meaning it was cold and got colder, rather than sudden, extremely low temperatures. There could be some damage, but it’s likely to be minimal.”

On the other hand, the cold snap will likely mean Texas fruit growers receive ample chill hours, something they missed during the two previous growing seasons, Stein said.

He said research shows cold January typically provides good fruit crops. It’s early, he said, but if the extended run of ideal chilling hours is an indication, Texas fruit growers should be in good shape for 2018.

“The best cold is between 32-45 degrees, and we’ve certainly had extended time in that range, and it’s been cloudy with sleet and drizzle in many places,” he said. “That’s perfect for fruit growers as far as winter goes.”

Dr. Allen Knutson, AgriLife Extension entomologist, Dallas, said the recent cold weather will not likely have a significant impact on most insects in North Texas.

“This is because insects are well adapted to the cold winters, especially since this cold occurred in the middle of winter,” he said. “A late spring artic freeze, occurring when insects have resumed activity, would have a greater impact than cold in December and January.”

Knutson said another factor to consider is that many insects have short life cycles, often three to four weeks. Thus, even when weather conditions such as a cold winter cause high mortality, insect populations can quickly recover once warm conditions return.

Dr. Clark Neely, AgriLife Extension small grains and oilseed specialist, College Station, said low temperatures are common in regions like the Panhandle and High Plains. But drought conditions can exacerbate problems when coupled with near zero degree and negative temperatures.

“Drought conditions are much more of a concern right now,” he said.

Neely said forage producers in the High Plains have likely pulled cattle from dryland pastures because of the lack of moisture, and producers with irrigation will continue to water those fields to push their forages once temperatures rebound.

The area received beneficial rain events during December but remains “abnormally dry” according to the U.S. Department of Agriculture Drought Monitor, she said.

The low for East Texas was 14 degrees, reported in Marshall, according to Nielsen-Gammon.

“Some winter-hardy varieties should fare better than other varieties typically planted in East Texas, but it’s likely there will be some visual frost damage, and forages may be slow to recover,” she said. “Most producers are already feeding hay and supplements. This just means they will have to provide more supplements than typical as we continue through the cold season.”