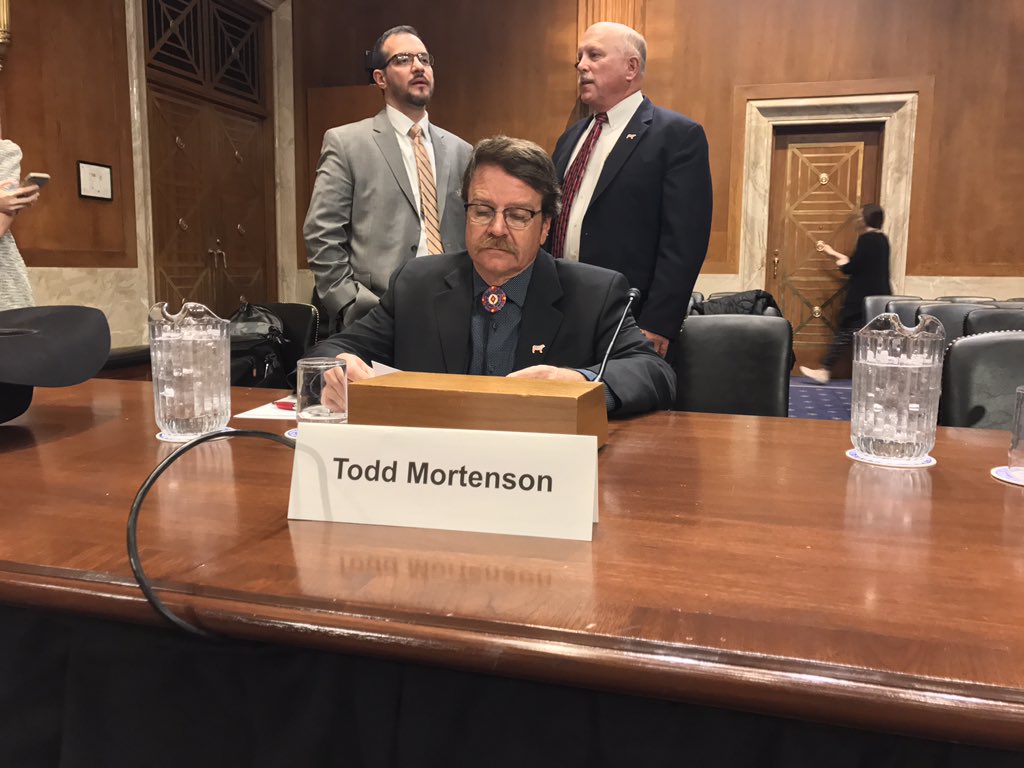 WASHINGTON (March 8, 2018) – Third-generation South Dakota rancher Todd Mortenson today testified in support of S. 2421, the Fair Agricultural Reporting Method (FARM) Act, which would prevent the federal government from regulating nearly 200,000 animal agricultural operations as if they were toxic Superfund sites. Mortensen delivered his testimony at a hearing of the Senate’s Environment and Public Works Subcommittee on Superfund, Waste Management, and Regulatory Oversight, which is chaired by U.S. Sen. Mike Rounds (R-SD).

“I manage 1,295 cattle on 19,000 acres of land,” Mortensen explained in his testimony. “The concentration of emissions is extremely low, because my cattle are spread over such a large area. However, CERCLA reporting requirements do not take concentration into account – only release. It makes no difference whether my cattle are spread over 10 acres or 10,000 acres. If my 1,295 cattle emit over 100 pounds of ammonia or hydrogen sulfide per day, I am required to report their emissions to the U.S. Coast Guard and EPA.

“Reporting is no small task,” Mortenson added. “It is a three-step process that spans, at minimum, one year.”

The Comprehensive Environmental Response, Compensation, and Liability Act (CERCLA) was enacted to provide for cleanup of the worst industrial chemical toxic waste dumps and spills, such as oil spills and chemical tank explosions. The Emergency Planning and Community Right-to-Know Act (EPCRA) was enacted to ensure that parties who emit hazardous chemicals submit reports to their local emergency responders to allow for more effective planning for chemical emergencies. Both of these laws include reporting requirements connected to the events at hand.

Neither of these laws was ever intended to govern agricultural operations, for whom emissions from livestock are a part of everyday life. To make this clear, in 2008, the Environmental Protection Agency (EPA) finalized a rule to clarify that farms were exempt from CERCLA reporting and small farms, in particular, were exempt from EPCRA reporting, given that low-level livestock emissions are not the kind of “releases” that Congress intended to manage with these laws.

Unfortunately, in April 2017, the D.C. Circuit Court vacated the EPA’s 2008 exemption, putting nearly 200,000 farms and ranches under the regulatory reporting authorities enshrined in CERCLA and EPCRA.

“As the May 1, 2018, reporting deadline quickly approaches, only Congress can ensure that the agricultural community is protected from this reporting burden, the reliability of our emergency response coordination is maintained, and the integrity of the Superfund law is not degraded,” Mortenson concluded. “The key to environmental sustainability is working together with stakeholders — not fighting us.”