A beef brood cow on the farm is nearing “retirement.” Her name is simply Cow 60, because her ear tag bears the number 60.

When the number 60 arrives in human age, that is often considered a time when some individuals begin to look forward to retirement. But not all humans retire when they reach the age of “60,” and certainly Cow 60 is not ready for culling. All she needs to continue her streak of producing outstanding calves is an occasional trimming of her hooves.

Proper hoof maintenance keeps Cow 60 from retirement. Fifteen minutes on the hoof trimmer’s turn table, and she is good for another season of calving.

So, what does hoof trimming have to do with cattle reproduction and performance? What are some of the common concerns with cattle hooves?

Lameness
With any hoofed animal, it is important to monitor and maintain sound hoof health. Lameness occurs when there is a crippling or physically disabling foot or leg problem that causes cattle to limp or move with difficulty. As much as 95% of lameness is due to hoof-related health issues. Lameness in cattle is often a reason for culling.

TRANSFERS WEIGHT: Hoof trimming sometimes requires that a block is added to the hoof digit not affected by an issue. The block transfers weight off the affected digit, allowing time for healing.

And, lameness is costly to producers. As a result of lameness, cattle can suffer weight loss. In dairy cattle, milk production can decrease. With bulls in particular, cattle can be hesitant to perform their breeding tasks and even incur fever that affects fertility.

Lameness is derived from a long list of unhealthy hoof conditions. Here is a list of some of the most common hoof problems in cattle:

• Sole ulcer. Although there are many issues that can go wrong with cattle hooves, a common and costly condition that causes extreme pain and lameness in cattle is the sole ulcer, or pododermatitis circumscripta. Sole ulcers are a lesion on the toe or heel of the hoof, but most commonly found on the heel. The sole ulcer disrupts production of horn material on the hoof.

Since the condition is so common, sole ulcers can be suspected when cattle present with a noted limp, but this condition must be officially identified during a hoof trimming. When removing normal horn material on the sole of the hoof, the hoof trimmer can detect the ulcer. The treatment for this condition is often a “block,” which is an extension added to the hoof digit that is unaffected. This creates a transfer in the weight bearing of the hoof digits. The differing heights to the hoof digits relieves pressure on the sole ulcer and allows for an opportunity to heal.

• Hairy warts. Another condition that is common is digital dermatitis, or simply referred to as hairy warts. The nickname comes from the raw, reddened area of concern, which is rounded by projected hair-like structures. This condition causes no fever in cattle, but it is painful.

Hairy warts are caused by bacteria, which tend to thrive in manure and wet conditions. A topical solution is often used to treat hairy warts if it is not an advanced case. Hairy warts are highly contagious.

• Foot rot. Another common condition is called foot rot, or interdigital phlegmon. Also referred to as infectious pododermatitis, this condition is often caused by invasion of a bacteria called Fusobacterium necrophorum, which often enters hooves between the two digits of the hoof. Like hairy warts, wet conditions can promote the bacteria’s growth. 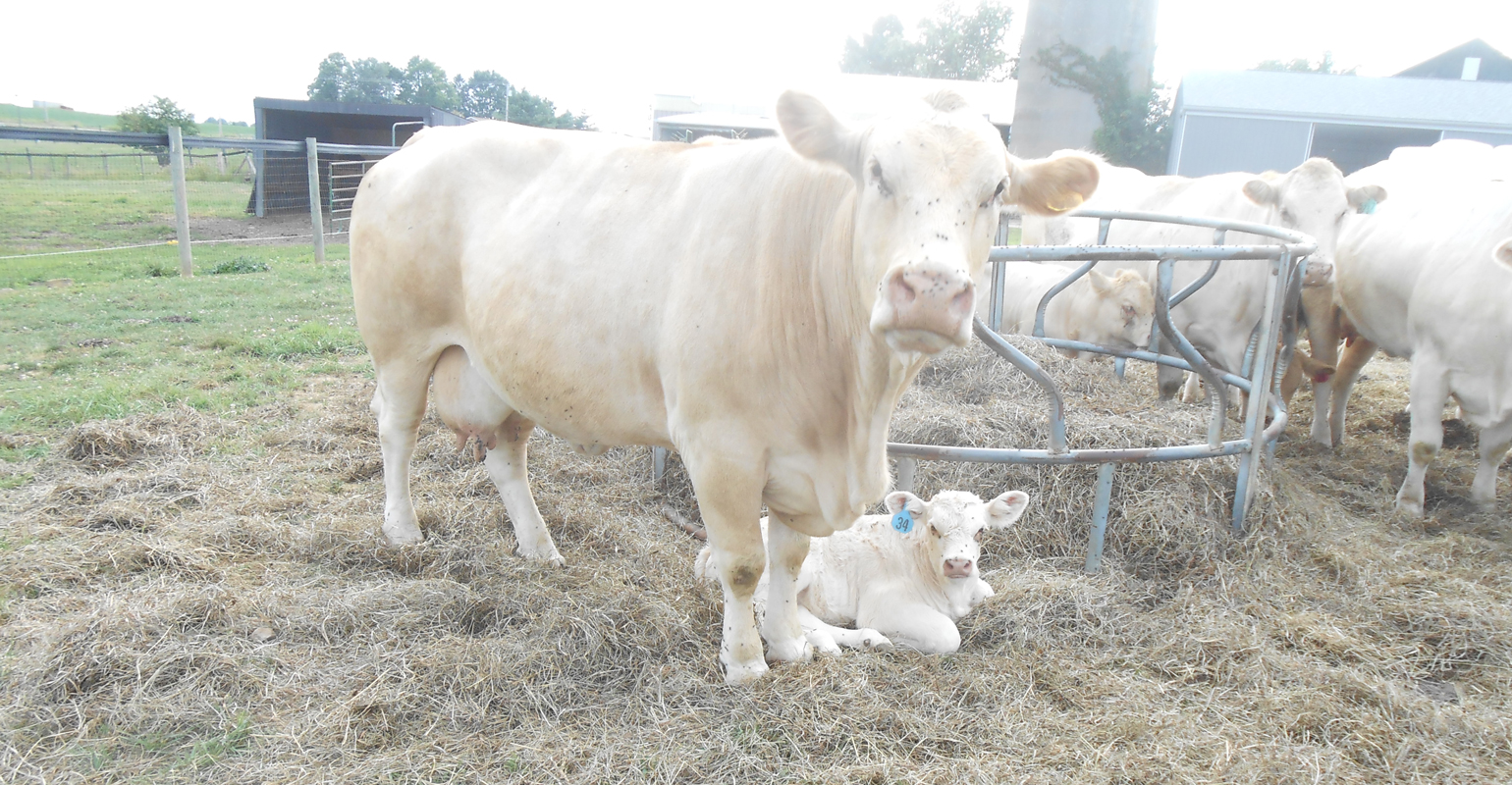 LIFE EXTENSION: Maintaining proper hoof care is key to avoiding retirement for Cow 60. Despite her age of 14, she is a beef brood cow that produces outstanding calves … as long as her hooves are trimmed on a regular basis.

Notable signs that cattle are suffering from foot rot is, again, an obvious limp. Cattle can produce a fever with foot rot. In addition, the area just above the hoof is often noticeably swollen equally on both sides in a symmetrical pattern. Also, if given the opportunity to inspect the hoof up close, there is a foul smell associated with this bacterium.

Mild cases of foot rot can be treated by a hoof trimmer who applies a topical cream after thoroughly cleaning between the digits. In most cases, however, veterinary supervision may be advised, since the swelling could progress upwards from the hoof extensively.

• Deep infection. While foot rot results in a symmetrical presentation of swelling, deep infection is synonymous with asymmetrical swelling. Deep infection can occur in cattle hooves when cracks or breaks in the hoof result from walking rough terrain in pastures or standing on hard surfaces in barns and feedlots.

The cracks in the hoof allow a deep entry of infection to invade muscle and bone tissue. The asymmetrical pattern of swelling is typically associated with the location where the hoof was injured, leading to a damaged point of entry and swelling on one side. Abscesses occur when bacteria get trapped inside the hoof. Of course, the obvious symptom, once again, is limping. Treatment will most likely require veterinary care.

One common train of thought is that laminitis is triggered by diet. But, much research and mystery surrounds laminitis. This serious hoof problem is thought to be a non-infectious condition that presents as foot tenderness and can potentially progress to the traumatic stage of an inability to walk. Acute sole ulcers are often a precursor to the chronic condition of laminitis.

Also referred to as “slipper foot” in cattle, laminitis is a very serious condition where veterinary intervention is required. Detection in early stages is key.

Prevention
Since most hoof problems are increased by environmental conditions, producers can perform preventative measures to decrease the potential for lameness in their cattle herd. Rocky pastures should be avoided by cattle since they can lead to breaks in hooves. And a constantly wet or contaminated hoof environment can encourage bacteria growth. Footbaths are common in dairy cattle barns to keep hooves cleaned, but beef cattle can also use footbaths to promote healthy hooves.

FINISHED: Cow 60 is ready to exit the hoof turn table after a block is applied to transfer weight off her affected hoof.

Normal wear and tear of hooves is healthy for cattle, but issues beyond that need the attention of a hoof trimmer or a veterinarian to prevent and treat lameness in cattle, as well as promote cattle performance such as weight gain and reproduction.

With Cow 60, she has undergone her time on the hoof trimmer’s turn table with excellent results to promote her outstanding calving performance. Culling is not in her foreseeable future. Although she is getting up in age, she is not retiring. Much like many farmers, Cow 60 continues to be an excellent producer and keeps producing.

Tomko is a freelancer, professor and farmer from Rittman.