In this era of advanced vaccine technology and long-acting, expensive, powerful antibiotics, why do chronic pneumonia cases (“chronics”, “lungers”, “railers”) continue to occur? Mycoplasma bovis is considered the bacterial pathogen most often responsible for the development of chronic pneumonia in feeder operations. While Mannheimia haemolytica causes the dramatic pneumonia signs of fever, depression, appetite loss and rapid death, Mycoplasma bovis (M. bovis) is the underlying problem that continues to send calves back to the treatment pen. The organism has several unique survival mechanisms allowing it to dodge the immune system and suppress the calf’s normal response to disease. Once it establishes infection in the lungs, it can travel in the bloodstream to joints, organs, and nerves. These calves generally stay relatively alert with a fair appetite and are seldom pulled quickly for treatment. It may take 7-14 days after the lungs are severely affected before a calf shows dramatic clinical signs and, by that time, permanent damage has already occurred. In the absence of consistently effective vaccines, management practices and prompt treatment are crucial to controlling Mycoplasma pneumonia. Because the disease is spread by close and repeated contact, improving ventilation, sanitation and reducing stocking density will disrupt the spread of Mycoplasma. The two most important factors in the treatment of Mycoplasma pneumonia are early recognition and prolonged therapy. Metaphylaxis, where treatment is applied to the whole group (either on arrival or once 10-20 % of the calves are showing clinical signs of bovine respiratory disease or “BRD”), is one way to get an early start on Mycoplasma. Continuous therapeutic levels of effective antibiotics for 10 to 14 days are necessary because, without this, 30 to 70% of the calves will relapse, causing more lung damage, and requiring further treatment.

Traditionally, Mycoplasma bovis was considered normal bacteria in the nasal passages of healthy calves but with stress such as transportation and commingling, it descended into the lungs and spread throughout the body causing disease. However, recent studies found the M. bovis observed during BRD outbreaks are often due to calf-to-calf transmission of one strain among the cattle. Infection is widespread once cattle reach a feedlot situation; after 2 weeks on feed studies found 40-100% of calves will carry the organism. The disease is spread by close and repeated contact with nasal secretions of infected calves, especially in areas with poor ventilation and overcrowded facilities. The source of the M. bovis clones that spread among pen mates is either newly purchased calves or chronic calves housed in neighboring pens. There is evidence that transportation and other stressors (such as weaning, commingling, or extreme weather) increases shedding and therefore spread of the organism. Historically, the environment (watering troughs, feed bunks, bedding, old round bales of hay) has not been considered a major risk factor for spread of disease but new evidence has shown that M. bovis can persist longer under cool, damp, shaded conditions than previously thought and can be an important source of the organism.

There are no early clinical signs that indicate Mycoplasma is a problem at first treatment. Cattle are typically pulled for evaluation and treatment based on one or more of the following signs: depression, separation from the group, lack of rumen fill or “gutted” appearance, cough, excessive nasal discharge and difficult or rapid breathing. Respiratory signs with fever of 104°F or above confirms the diagnosis of BRD. However, certain later clinical signs strongly suggest M. bovis involvement:
1. Late Pneumonia-Usually 3-4 weeks after arrival to the backgrounder/ stocker operation/feedlot or 1-2 weeks after an initial treated case of pneumonia
2. Initially treated as routine case of respiratory disease (BRD) but calf does not respond to antibiotic treatment or suffers repeated relapses of pneumonia after antibiotic therapy.
3. Moderate fever/ Occasional cough
4. Development of lameness with swelling and pain in one or more joints, commonly the stifle, carpus (“knee”), hock and elbow may occur in 15-50% of cases. Some cases of pneumonia appear to respond to therapy but develop lameness without reappearance of the respiratory component.
5. Extreme weight loss (Wasting or “cachectic”)
6. A small percentage develop ear infections with drooped ear that occasionally drain pus. 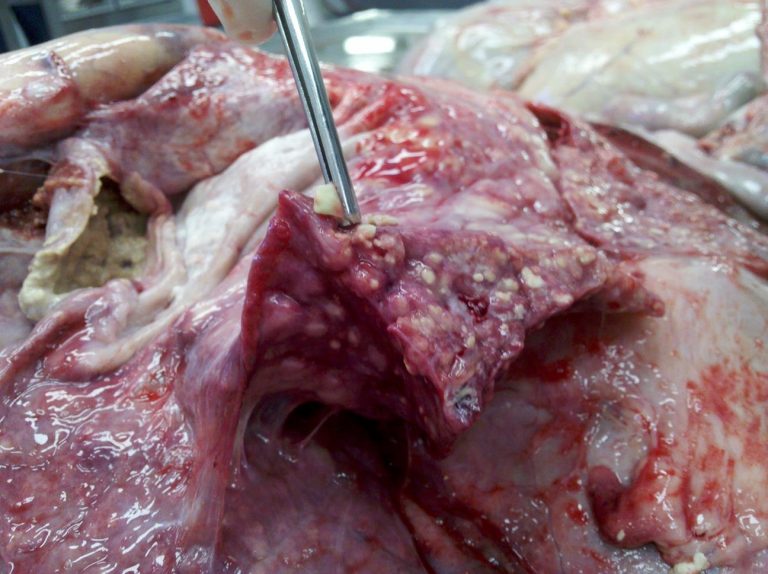 Diagnosis of Mycoplasma pneumonia in a live calf is challenging and is based on the history of repeated antibiotic therapy and clinical signs of chronic pneumonia and sometimes arthritis. Only lung fluid removed from the lung via bronchoalveolar lavage can be used for culture or PCR to identify the organism. The diagnosis can be made most reliably at necropsy if Mycoplasma bovis is cultured in an animal with lung lesions as seen in Figure 1. Arthritis is present in 15%-50% of cases with the stifle joint most commonly affected. Mixed lung infections with other disease-causing bacteria such as Mannheimia haemolytica, Pasteurella multocida, and Histophilus somni are common but antibiotic therapy may eliminate these other bacteria that initiated and/or contributed to disease.Response to antibiotic treatment is variable and frequently unrewarding. Mycoplasma organisms have no cell wall and are unaffected by penicillin and other “beta lactams” (Polyflex, Excenel, Excede, Naxcel) that kill bacteria by destroying the cell wall. Currently Draxxin, Baytril and NuflorGold (available by prescription only) are FDA approved to treat Mycoplasma pneumonia. Use of other antibiotics is considered “Extra label” and requires a valid veterinary/client/patient relationship. These antimicrobials provide an opportunity for the host’s immune response to develop and counteract infection, but M. bovis has defense mechanisms that include an ability to vary its surface proteins and to form protective biofilms, making it difficult for antibodies to do their work.

The two most important factors to keep in mind regarding treatment are:
1. Early recognition and treatment and timely assessment of response to therapy is crucial.
2. Prolonged treatment is necessary (continuous therapeutic levels for 10-14 days). The feed additive Chlortetracycline (CTC) is often used for extended therapy after an injectable antibiotic. Because M. bovis is frequently found in conjunction with Pasteurella multocida in cases of BRD, the following indication for use is necessary on the Veterinary Feed Directive (VFD) for Aureomycin (CTC):

Duration of Feeding: days (Feed for not more than 5 days)
• USE OF FEED CONTAINING THIS VETERINARY FEED DIRECTIVE (VFD) DRUG IN A MANNER OTHER THAN AS DIRECTED ON THE LABELING (EXTRA-LABEL USE) IS NOT PERMITTED.

Prevention depends on sound biosecurity and biocontainment practices. Because M. bovis pneumonia or polyarthritis may develop secondary to other viral (especially BVD) or bacterial pathogens, control should begin with minimizing the effect of well-recognized factors predisposing to BRD. Stress plays a major role in disease through immunosuppression so excellent nutrition, vaccination protocols and management are critical. There are numerous challenges to production of an effective vaccine to prevent M. bovis infections. Among these challenges are duplicating the roles of other respiratory pathogens and their interaction with Mycoplasma, and the need for a “challenge model” that reproduces the disease in the laboratory as seen in the field. In spite of all the considerable amount of work on bacterin-based M. bovis vaccines, there is no direct proof to date that these vaccines are effective under field conditions. Consult with your local veterinarian for the best management plan for your operation.

The following steps should reduce the risk of Mycoplasma pneumonia in feeders:
1. Vaccination with a 5 way respiratory virus vaccine and a Mannheimia haemolytica toxoid. Use of an intranasal vaccine for the viral fraction is recommended in high risk cattle to keep appetite up and reduce vaccine-induced fever.
2. Cattle with extremely low levels of the trace elements selenium and copper have difficulty fighting any disease challenge. An injectable trace mineral supplement (such as Multimin) is often needed to boost the copper and selenium levels during the initial arrival period.
3. Metaphylactic treatment (treatment of all calves on arrival) of high risk calves with long-acting antibiotics is a well-established, beneficial procedure that can reduce morbidity (sickness) and case fatality (death) by up to 50% in high risk calves. Be aware that overconfidence in and reliance on metaphylaxis and long-acting antibiotics can lead to delayed follow-up treatment if calves are not adequately monitored.
4. Keep chronics away from calves treated for the first time to minimize the spread of Mycoplasma.
5. Eliminating exposure by reducing unnecessary traffic through the farm, isolating new arrivals, good sanitation and treating sick cattle early will help reduce the risk of disease.
6. Buying preconditioned calves that have been vaccinated for respiratory diseases prior to weaning (especially BVD) and dewormed will help minimize sickness and death loss.

Several studies have reached the conclusion that up to 60% of cattle entering the chronic pen can survive and reach slaughter. The question becomes how to maximize the number that recover and minimize the time on the farm for those that won’t. The chronic pen should provide a comfortable, well-bedded environment with good footing and easy access to feed and water. It is recommended to weigh and examine all chronically ill cattle regularly to assess changes in weight, temperature, and other clinical signs including lameness. Calves in the chronic pen should be categorized into those that: 1) need further treatment, 2) can return to their home pen, 3) are eligible for salvage slaughter or 4) must be euthanized due to continued weight loss from pneumonia and lameness. It may take a month or more before there is adequate improvement in lameness and weight gain to return to a pen. Lameness may never resolve completely but the animal may be fit for slaughter if body condition is adequate, drug withdrawal times are complete, and the animal can be humanely transported. There is little else that can be done with chronic calves besides providing an opportunity for convalescence but terminating them if no hope for recovery.

In summary, the clinical features of chronic pneumonia, recurrent treatment failure, and lameness caused by arthritis are highly suggestive of infection by Mycoplasma bovis. It can act on its own but most often it does its damage in conjunction with other bacteria and viruses and may take over lung lesions initiated by other bacteria. Response to antibiotic therapy is often limited and drugs such as penicillins and cephalosporins are useless because of the bacteria’s lack of a cell wall. Diagnosis can be difficult since M. bovis is often recovered from nasal swabs of healthy calves so the presence of the bacteria in the nose of a sick calf does not prove it is causing disease. M. bovis is responsible for a large proportion of chronics and the fate of these animals is an important management task. Future research will focus on the relationship between mycoplasmas and other respiratory pathogens, developing improved diagnostic tests, monitoring antibiotic effectiveness and evaluation of vaccines for prevention of disease.