BeefTalk: Pasturing – Get it Right 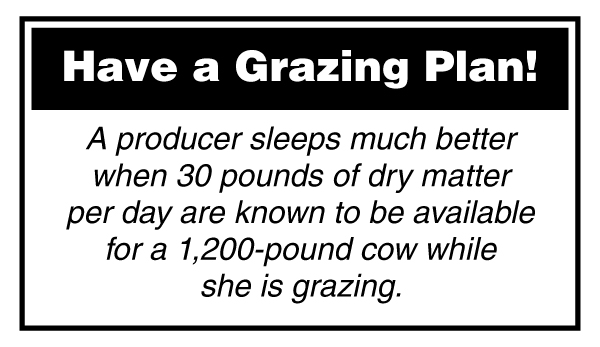 Cattle grazing is not simply opening a gate and herding a group of cows into the pasture.

Pasturing is a product of domestication, the need to keep cattle in a desired area and properly engage cattle with plants. To the bystander, pasturing may seem like a cumbersome human activity, building fences, developing water stations and imaginative gates.

For those in livestock and forage management, however, the process of spring and summer grass management is the question of the day. Astute managers resist the strong temptation to start opening gates and letting the cows graze beyond the calving pasture.

They know better than to let the cows rush to eat the early grass growth only to stunt later grass development. They know grass species have different growing habits.

Simply put, they know better than to make mistakes. Cattle grazing is not simply opening a gate and herding a group of cows into the pasture. Each pasture has a grazing history calculated on known properties for that land.

The pasture stocking rate allows for the utilization of the pasture plants and, at the same time, provides stimulation for the growth of the very same plants the cattle are eating. That is the basis for one of the principles when grazing: Take half, leave half.

The cattle business is a grass business, and despite the variable weather and associated environments, grass plants seem to adjust quite well. Because of this symbiosis, cattle managers are grass managers, and producing beef from grass depends on the development of grazing plans that allow grass plants to fully utilize their evolutionary genomics.

However, Lee Manske, Dickinson Research Extension Center range scientist, notes the exact same start and stop dates and the same rotation dates for pastures from Lake Michigan to the Pacific Ocean and from the northern-most east-west highway in Canada south to pastures that do not have frozen soil during the winter. This uniformity of a large land mass speaks of the centuries of natural selection engrained in plants to withstand grazing.

More important is to manage grazing systems according to the localized grass species; however, the fundamental principles will not change. The bottom line is effective grazing strategies utilize cattle because cattle do a good job of keeping the grasslands healthy.

The golden rule among producer grazing plans is perhaps simply to have a plan. The plan should reflect known biological principles that enhance perennial grass production and be manageable by the producer.

At the Dickinson Research Extension Center, the grazing season starts in late April to early May. The cows and calves will be turned out on crested wheat (cool-season) pastures in early May to calve and remain there until the end of May to early June.

The center sets dates within its plan and adjusts for limited yearly managerial effects. The four weeks of grazing cool-season grass provide a good start for the summer grazing season.

As the summer grazing season is planned, effective rotation systems can help harvest a very heavy calf and keep the grasslands in peak condition for centuries to come. Dates and proper stocking rates are key to the location.

For years, the center has started cow-calf pairs grazing on native range at the start of June. Pairs are sent to their second rotational pasture by mid-June and to their third pasture at the end of June. This is called rotational grazing: three pastures with a complete quick rotation by mid-July. This stimulation of the grass plants increases pasture productivity.

Consult with a local range scientist and develop a good, solid plan. Long-term grazing systems work, improving the grass for generations to come. Don’t wait; start the discussion, and build a fence or two and a few gates.