A recent analysis on the profitability of varied cow sizes and calf production levels shows smaller cows continue to show superior profitability on a ranch scale, particularly when measuring profit per acre and per ranch.

Steven Lukefahr of Kingsville in South Texas compiled this research. He runs a part-time cow-calf operation and teaches at Texas A&M University–Kingsville. In his own operation he uses grazing management and locally adapted cattle to accomplish the amazing joint feats of decreasing costs, increasing production, and improving profit all at the same time. 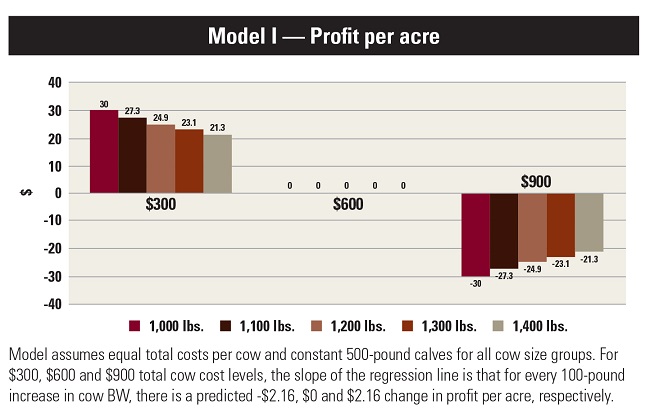 In setting his cost structure, Lukefahr noted that the Livestock Marketing Information Center in 2015 predicted total cow costs of $851 per cow for 2016 and considered his own low costs. In his simple economic analysis he included four models that involve total cow cost figures of $300, $600, and $900 per cow. He also included five cow weight classes in 100-pound increments from 1,000 to 1,400 pounds as used by University of Wyoming researcher Derek Scasta in Scasta et al. (2015, 2016). 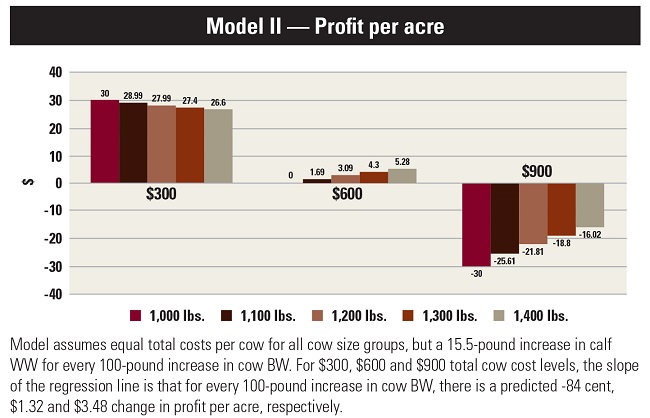 These calculations are for four scenario operations that would have the forage to run 100 of the smallest cows or an equivalent forage consumption by the larger cows. Specifically, the herd sizes would be 100, 91, 83, 77, and 71 cows from 1,000 pounds up to 1,400 pounds.

Lukefahr analyzed profit per cow and overall profit on a per-acre basis for each of the four model operations. Very importantly, he added this: “The business focus should not be on profit per cow but economic returns to the land. Interestingly, profit per acre better reflects the health of the business.” 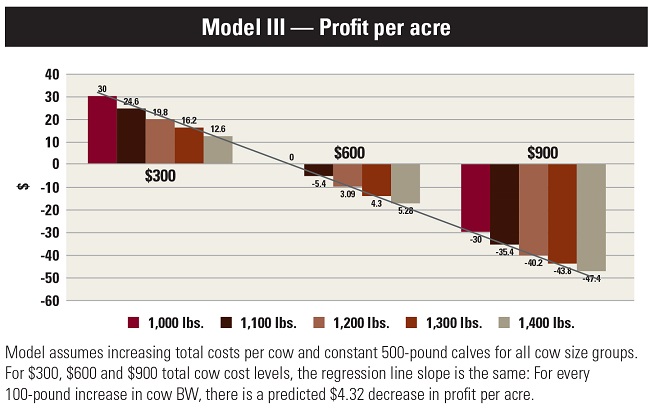 Here is a summary of what he found about profit per acre. Also look at the graphical representation of the four models presented with this story.

Model I results: (Equal cow costs, equal WW) For the low-input $300 cost level, higher profits per acre are made by smaller cows by weaning calves with similar weaning weights, there are no profit returns at the $600 cost level, and large losses occur at the $900 cost level. At the $300 level the larger number of smaller cows were more profitable, while at the $900 level the heavier cows, even though they are fewer in number, lose less money even though losses still occur.

Model II results: (Equal cow costs, increasing WW) Despite the seemingly magical ability of larger cows not to cost more, their fewer numbers still hurt real profits. Somewhat higher returns to the land occur at the $300 cost level than in Model I, very slim profits are realized at the $600 cost level, and losses occur at the $900 cost level.

Model III results: (Increasing cow costs, steady WW) Lukefahr noted this is the best-case scenario for lighter cows but the worst-case scenario for heavier cows. It also comes closest to mimicking the North Dakota data (Ringwall, 2008) that showed smaller cows from bigger cows. As expected, lighter cows return more profit to the land than heavier cows at the $300 cost level because heavier cows were assumed not to wean heavier calves. Only zero to slim profits are realized at the $600 cost level. Compared with Model II, even higher losses occur for all cow herd sizes at the $900 cost level. 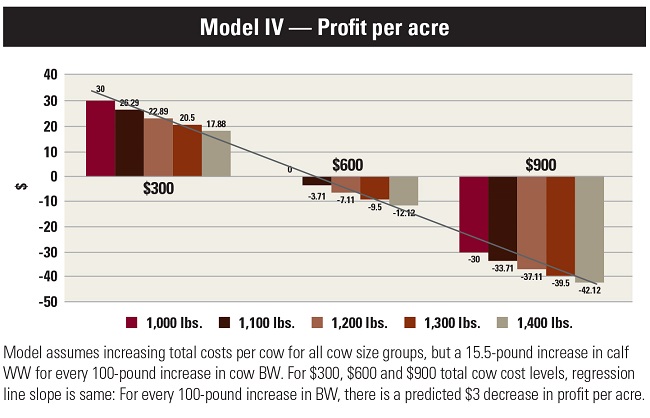 3. An average 210-day adjusted weaning weight (WW) of 500 pounds for all cow size groups was modeled, versus a 15.5-pound increase with each 100-pound increase in cow body weight (calculated from data published by Costa et al., 2011).

5. Total revenue based on 80% of the cow herd selling a 500-pound or heavier weaned calf. The 20% figure accounts for open cows, calves not surviving and/or retaining replacements.

To read Lukefahr’s entire study go to his website: https://lukefahr-ranch.com/. Then open the tab “Higher Profits Per Acre” to read his study.