In climates where wind chill is an issue, creating windbreaks can save stockmen money in reduced feed costs, reduced illness and health costs, reduced loss of body condition, and increased growth for young animals.

Shelter is important for fall-calving herds, says Joseph Darrington, ag engineer at South Dakota State University. “There are two main types — natural shelter using trees/planted shelterbelts and constructed windbreaks. If you plant a shelterbelt, have a couple rows of tall trees and a couple rows of smaller trees.”

For maximum protection during winter and spring, it helps to include some evergreens that won’t lose their leaves.

Constructed windbreaks are generally made with vertical boards, leaving spaces between them rather than a solid barrier. 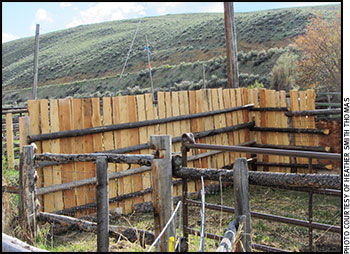 “The best porosity, according to several studies, is from 20% porosity (open) and 80% solid, down to 65% or 70% solid. If you have more than 35% porosity (and 65% solid) or closer to 50-50, you lose some of the benefits of the windbreak; you’ll have more air coming through rather than being pushed up and over,” explains Joseph Darrington.

“The best porosity, according to several studies, is from 20% porosity (open) and 80% solid, down to 65% or 70% solid. If you have more than 35% porosity (and 65% solid) or closer to 50-50, you lose some of the benefits of the windbreak; you’ll have more air coming through rather than being pushed up and over,” explains Darrington.

A solid windbreak reduces wind speed next to the break, resulting in snow dumping right behind the break, Darrington says. This cuts down on the protected area for cattle to bed or stand behind.

“With 30% open and 70% solid you can expect the protected zone to extend 10 to 15 and sometimes up to 20 times the height of the windbreak. The protected area is estimated based on the height. An example would be a 10-foot (ft.)-tall fence slowing wind for about 100 to 150 ft. behind it. If it’s a straight windbreak and the wind is coming head on, perpendicular to it, this creates a triangular protected zone,” he says.

If wind tends to come from several directions you can create a curved or cornered windbreak.

“If you build a windbreak 6 to 10 ft. tall, set the posts deeply enough to hold it or build it on skids for portability. If you use 1-by-6 inch (in.) boards (which are actually 5½ in. wide and ¾ in. thick) the spacing would be 1½ to 2 in. apart. This would be 7½ in. from the center of one board to the center of the next,” says Darrington.

Some windbreaks are made using vertical metal roofing. A 30-inch-wide piece is enough space for calves to snuggle behind and be completely protected. However, to create proper porosity, larger gaps between metal pieces will be needed.

These types of windbreaks are a bit less effective for cows. Cows that are right up next to the windbreak may still get cold due to the larger gaps and sustained air speed. Just a short distance behind the windbreak, there is decreased air velocity.

“These are faster to build than boards, with fewer total pieces to put vertically. The spacing, if it’s a 30-in. piece of roofing metal, would be 5- or 6-in. gaps between them, or about 36 in. on center,” he explains.

Portable windbreaks are handy when rotating pastures or strip-grazing winter pastures, moving the windbreaks when cattle are moved.

“Just make the base heavy enough and wide enough that they don’t tip over in the wind, or stake it down with 2-ft. lengths of rebar or T-posts,” Darrington says.

You can make portable windbreaks in sections to move with a tractor — either pulled or picked up with a loader and repositioned. If you have to take them very far, you could lift them onto a flatbed to haul to the next pasture, making sure you strap them down securely for hauling.