What’s the outlook for 2018 acreage commitments?

One planting season leads right into the next. And while we may be in the midst of winter, it won’t be long before we begin to turn our attention to spring weather and planting conditions.    To that end, traders will be anxiously anticipating USDA’s guesstimates for 2018, released during February’s Outlook Forum.

As such, this is a good opportunity to review what’s occurred from a historical standpoint. This week’s chart provides an overview of acreage commitments for corn, soybeans, wheat and hay, respectively. It should be noted that corn, soybean and wheat numbers represent planted acreage, the hay data represents harvested acreage. 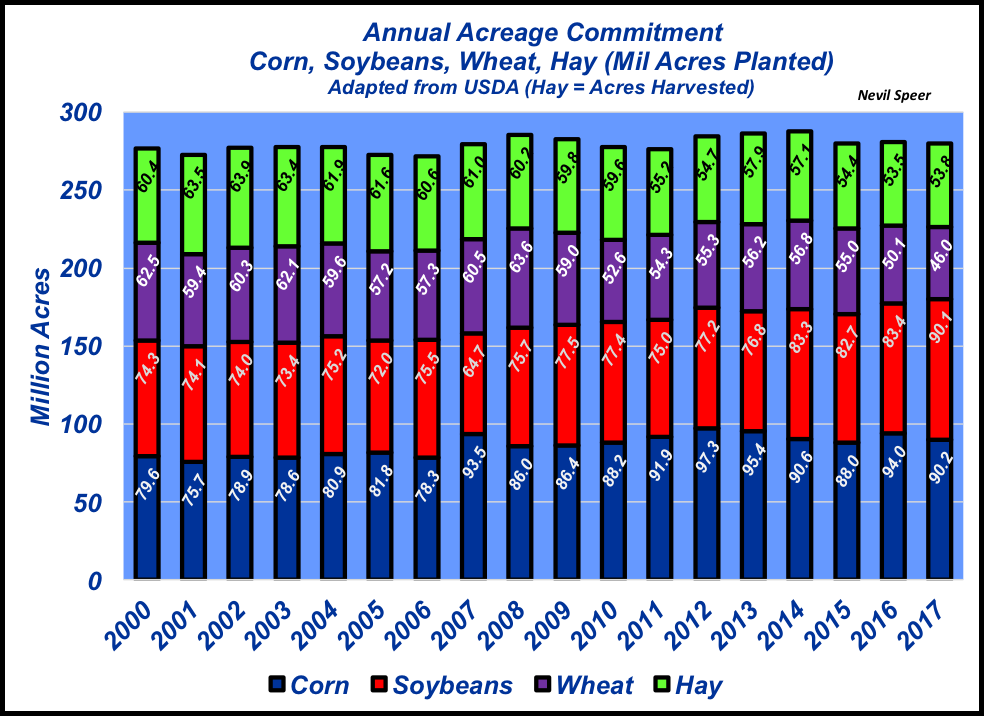 So, there’s been some give and take along the way. The give has come from the wheat and hay sectors. Not surprisingly, wheat has steadily trended lower and given up nearly 16 million acres since 2000. Likewise, harvest hay acres are down just over 10 million acres versus the peak in the early 2000s.

The big winner of late has been soybeans, gobbling up nearly all of those acres over time. The flux acres—those that come and go in the total—occur in the corn column.

All that said, where do you see these trends headed in 2018 and the few years following? Will soybeans continue to become a bigger portion of the total mix, or will that commitment plateau in the years to come? What are your plans and/or your neighbor’s plans for this spring? Leave your thoughts in the comments section below.