What are the implications of the Cattle on Feed report?

Interpretation of implications following USDA’s monthly Cattle on Feed reports is always interesting and certainly, last Friday’s report is no different. However, November’s report may be especially significant from a placement perspective.

First, October’s total placements equaled 2.39 million head. That makes October the 10th consecutive month in 2017 in which placements are up year over year. To date, the placement total is 19.615 million head – 1.64 million head bigger versus this same time last year and the biggest January-through-October total since 2011.

Meanwhile, feedyard arrival totals during the past six months are running 1.044 million cattle ahead of 2016; the front-end of those cattle are now influencing the marketing side and will continue to do so into the spring. 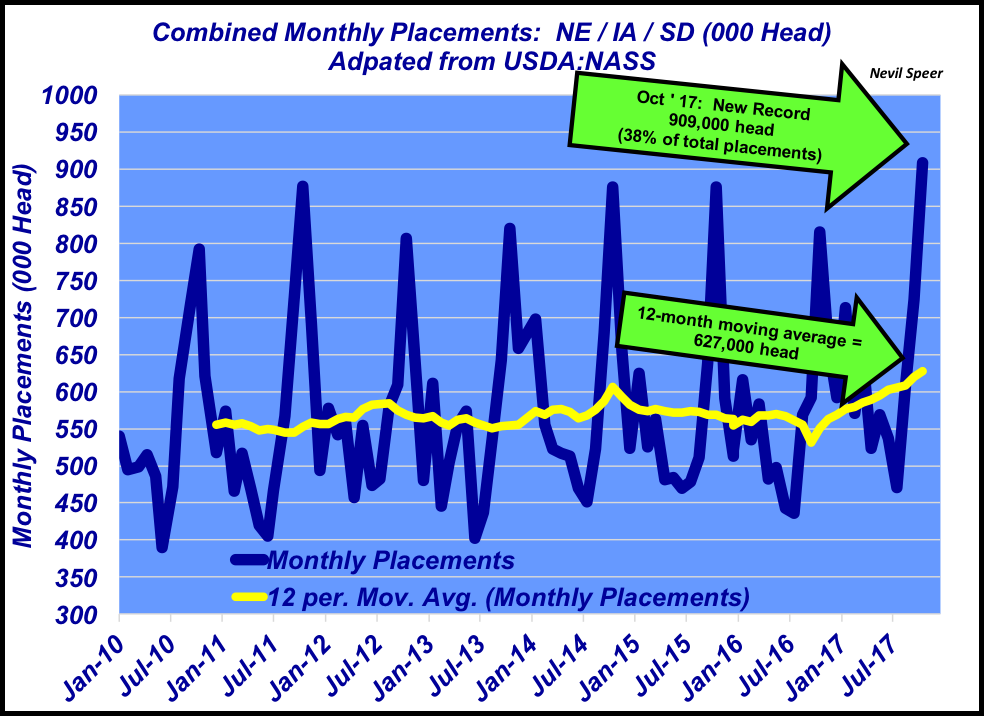 Second, and perhaps more significant, are placements in Nebraska, Iowa, and South Dakota. These three states combined for a new monthly record of 909,000 head. Additionally, that total represents 38% of all placements – also a new record.

Evidently, cattle feeders in the Corn Belt states intend to market their surplus corn through livestock. The November Cattle on Feed report reveals the reckoning of that occurrence. This will be an important component to monitor in coming months as we progress into the spring marketing season. Fed cattle basis could be influenced by these events.

How do you perceive the uptick in placements in Nebraska, Iowa and South Dakota? Do you see this trend continuing? What influence might that have on fed cattle prices? Leave your thoughts in the comments section below.

Nevil Speer is based in Bowling Green, Ky., and serves as vice president of U.S. operations for AgriClear, Inc. https://www.agriclear.com/– a wholly-owned subsidiary of TMX Group Limited. The views and opinions of the author expressed herein do not necessarily state or reflect those of the TMX Group Limited and Natural Gas Exchange Inc.