Use a Calf Puller Properly

When a calf needs help to be born, these tips will ease the process for cow, calf and humans.

Most calves can be pulled by hand after correcting any abnormality of position, but occasionally a mechanical calf puller is needed. It is important to first determine whether the calf can be safely pulled, or if it should be delivered by C-section.

Mark Alley, North Carolina State University College of Veterinary Medicine, says a calf jack is a great tool when used appropriately, but if used incorrectly it can cause severe damage. Don’t apply more force than what two strong men can do, pulling by hand.

Never utilize steady maximum pull. Pull when the cow strains, and stop while she rests. Chain placement is crucial, he adds. The puller puts enough force on a leg to pull joints apart or fracture bones. Put one loop above the fetlock joint and a second loop in a half hitch below it for two points of pull, spreading the pressure so it’s not all in one place — or blood flow may be cut off. Pull slowly and gradually, using lots of lubricant.
If you can get the calf’s head and front legs into the pelvis without traction and get your hand between the calf’s forehead and the cow, the calf can probably be pulled. If the calf’s head is hitting the cow’s pelvis, it should be delivered by C-section.

“A common mistake people make is trying to pull calves that are too big to be delivered vaginally. Another mistake is working too quickly. This may result in vaginal or uterine lacerations in the cow or injuries to the calf,” says Alley. 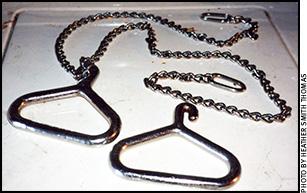 while she rests. Chain placement is crucial, Alley adds.

it for two points of pull, spreading the pressure so it’s not all in one place —

or blood flow may be cut off.

Use the rod on the puller as a lever and as a pulley, after the calf’s head emerges. After the slack is taken out of the chain, Alley recommends that the puller be slowly moved toward the cow’s feet, working with the cow as she strains. Then move it back up while taking up slack gained with this leverage action. This process is repeated several times, then the winch or ratchet is utilized to bring the calf on out, ratcheting only when the cow is actively straining.

“I prefer the cow to be flat on her side before using the puller,” says Alley.

It’s easier to use, and easier for the cow to help you because she can strain more effectively. Gravity is against you when she’s standing; the heavy uterus and calf are resting on the abdominal floor and the calf must come up and over the pelvic brim.

It only takes a moment to lay a cow down with two people. After you put chains on the calf’s feet, put a rope around the cow’s body, using a double half hitch. One person pulls on the rope and the other pulls on the chains. This stimulates the cow to strain, and she wants to lie down. The key is pulling on the chains at the same time you pull on the rope. Once she’s down, lay her on her side before positioning the calf jack.

Then Alley aligns the base (butt plate) of the calf jack just below her vulva. The chains or straps around the calf’s legs can then be hooked to the calf jack.

“I prefer a calf jack that can put alternating pressures on the legs, bringing them forward one at a time, walking the shoulders through the pelvis — like you would when pulling by hand,” he explains.

“As soon as I get the head out, I start pushing down a little with the end of the calf jack, toward the cow’s feet. I try to deliver the calf in an arc, as he would come during a natural birth,” Alley explains.

Don’t pull downward on the calf too much too soon or you may injure its ribcage, he warns. Mimic nature in the way the calf curves over the pelvic brim and then comes head downward toward the cow’s hind feet as its ribcage passes through the birth canal.

“If you continue to pull straight out, you’re putting unnatural pressure on the calf’s spine because of the way the cow’s pelvis tilts. We often see spinal fractures when this happens,” says Alley.

The calf’s hips also tend to catch on the cow’s pelvis if it’s pulled straight out. If you start to pull downward, this raises its hips to come through the wider upper part of the pelvis. On a big calf, rotate it so its hips come through at a diagonal, with more room.

“Once the last rib of the calf has cleared the vulva, we can rotate the hips,” says Alley.

It doesn’t matter if this takes a few minutes, because the calf can start breathing; its ribcage can expand. Add additional lubrication for easier delivery.

“The pressure is off the ribs, but there’s pressure on the umbilicus, so he must start breathing,” Alley explains.

If you’ve taken time to clear its airways or let fluids come out of its nose as the ribcage is compressed going through the birth canal, the calf can start to breathe. This happens naturally as a calf is born, but can be hindered if you keep steady, unrelenting pressure with the calf jack.

Heather Smith Thomas is a cattlewoman and freelance writer from Salmon, Idaho.