To Roll or Not to Roll: That is the Question? 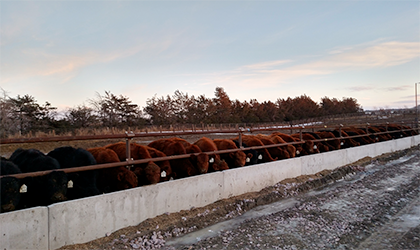 Every year beef producers ask, “Do I need to dry roll or grind my corn or can I feed it whole”? This is an important question because not all producers have the ability to process corn on farm. Processing adds costs and increases shrink. Unfortunately it is not an easy question to answer as the body of research that has evaluated feeding dry processed corn compared to whole corn shows mixed results. In some cases feeding whole corn is equal to rolled corn and in others rolled corn has slightly improved animal performance and or feed efficiency.

Owens et al. (1997) reviewed and analyzed data from more than 160 feeding trials comparing whole and rolled corn in feedlot diets. The results showed whole and rolled corn to be equal in average daily gains (Table 1). Additionally, cattle fed whole corn had lower dry matter intake and thus a lower feed to gain ratio than cattle fed dry rolled corn. Age of cattle and forage level in the diet has been suggested to possibly affect when and if corn should be processed.

Additional research conducted at the Ohio State (OSU) and North Dakota State (NDSU) universities evaluated whole and rolled corn diets relative to forage level and cattle age. Gorocica and Loerch (2005) evaluated feeding whole or cracked corn in diets with two levels of corn silage, 18% or 5%. They observed similar average daily gains and feed to gain ratios among cattle fed whole or rolled corn. They did observe a slight improvement in marbling scores for cattle fed cracked corn compared to whole corn. However, this improvement was not enough to affect the percentage of cattle grading choice or select. Thus feeding whole corn did not reduce animal performance or carcass value.

All in all, there is some evidence that processing corn can add value to animal performance, but the margin is slim, thus producers that do not have access to processing should feel comfortable feeding corn whole.

Oh but wait, what about all that whole corn that is coming out the back end? Beauchemin et al. (2014) characterized the grain particles isolated from feces for cattle fed whole corn. Approximately 22% of the feces was captured on a 1.18 mm screen and of that, 50% contained whole kernels, 13% were damaged, 26% were broken and 11% were empty. This is interesting but doesn’t show what percentage of the intake subsequently came out whole. Work by Gorocica and Loerch (2005) quantified whole kernel excretion in comparison to intake. In diets with 20,000 kernels ingested per day, cattle excreted approximately 8.0% (1770) whole kernels in the feces. In diets were cattle consumed ~40, 000 kernels per day, 1.23% (492) whole kernels were recovered in the feces. While these whole kernels may be highly visible, a very minor amount of the total intake actually escape whole.