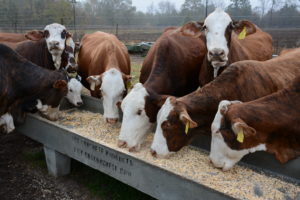 Supplemental feeding is underway in parts of the state due to dry conditions. Continued dry conditions could hinder winter annual growth and increase the need for nutritional supplements for cattle herds. (Texas A&M AgriLife Extension Service photo by Adam Russell)

“Compared to 2016, we’ve been much drier, so that means less stockpiled forage and shorter pasture conditions,” Banta said. “This means producers will have to feed hay much earlier compared to recent years. The warmer temperatures would be good for winter forage growth, but below-average rain could be bad, so it’s important to plan ahead.

“If producers get rain, they’ll want to utilize those winter annuals as best as possible,” he continued. “If they don’t get rain, producers need to be calculating how much hay they have on hand and whether they might need to start looking for sources to purchase additional hay.”

If winter pasture growth is abundant, then pairs can be grazed full time. However, dry cows in the last third of gestation should be limit-grazed for about two hours per day because full-time grazing can result in increased calf birth weights. If winter pasture is short, limit grazing will be the best strategy for both spring and fall-calving cows.

Banta said now is the time for producers to prepare for worst-case scenarios and maintain or improve herd body condition scores.

Hay should be tested for protein and total digestible nutrients, or TDN, so producers can calculate their herd’s nutritional needs and decide which supplemental sources are most appropriate, he said.

Producers should select supplements based on the cost per unit of nutrient needed, Banta said. Cubes are a common supplement used by many producers.

Banta said producers should start slow and build up with supplements, such as concentrates and grains, because cows are designed to consume grasses. It’s also important to feed them supplements consistently each day to avoid digestive problems such as acidosis, which can lead to founder, foot abscesses, damage to the rumen lining or death.

He recommends starting with no more than 2 pounds of supplement per cow per day and slowly building up from there.

Generally speaking, if cows are in good condition then 1-1.5 pounds of a 40 percent protein cube or something similar is a good place to start for dry cows; 2-3 pounds per day would likely be needed for wet cows, Banta said. If cows also need energy, then something like a 20 percent protein cube could be a good option. With average quality hay, a common feeding rate for dry cows would be about 2-3 pounds per day per cow or 4-6 pounds for wet cows.

Cows with a body condition score of 5 don’t look fat or thin. Ribs are not noticeable and areas on each side of the tailhead are fairly well filled in but fat pones have not developed, according to the AgriLife Extension overviews.

A body condition score of 6 represents cows that are in good shape for calving. Ribs are covered completely with fat. Fat deposits are beginning to increase in the brisket and on each side of the tailhead.

“If winter pastures are limited by weather conditions, we’ll still need to meet our cows’ nutritional requirements if hay or grazing isn’t adequate,” he said. “We can’t do anything about Mother Nature, but producers can plan ahead and be prepared to find the best option for their operation.”