WESLACO – With ticks posing an ongoing threat to Texas’ cattle industry and mosquitoes causing challenging human health diseases such as Zika virus, a consortium of public health experts met at the Texas A&M AgriLife Research and Extension Center in Weslaco to hear the latest research and offer potential solutions. 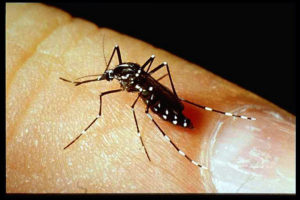 Texas A&M AgriLife Research and the University of Texas Medical Branch at Galveston are leading a collaboration to solve threats from the pests as members of the Western Gulf Center of Excellence for Vector-Borne Diseases.

The consortium has received $10 million from the Centers for Disease Control and Prevention over five years to carry out applied research and implement communities of practice across Texas to better respond to mosquito and tick-borne diseases, according to organizers.

“The Center of Excellence shows the true value of partnerships in confronting significant public health issues such as Zika and West Nile virus,” said Dr. Craig Nessler, AgriLife Research director in College Station. “The center combines the strengths of cutting edge research with public health surveillance and control, along with Extension education programs on how to lower mosquito numbers. Talented individuals from each of these areas form a strong team working together with the common goal of reducing disease.”

“The goal of this meeting was to gather the scientists and the public health officials in South Texas where we all could report progress on the research projects,” said Dr. David Ragsdale, head of the department of entomology at Texas A&M University in College Station.

“It also was where we could exchange information to inform the center members where there may be areas we can help either with our expertise or where further research is needed,” Ragsdale said.

The funding is being used to:

– Translate scientific advances into real-world tools to benefit the public.

– Train the next generation of leaders in public health entomology.

Attending the meeting were health officials representing the cities of Laredo, McAllen, Harlingen, Brownsville and Corpus Christi and Hildalgo, Cameron and Nueces counties, as well medical entomologists and vector control specialists from the Texas Department of State Health Services, and AgriLife Research scientists.

Other key partners in Valley research activities include faculty at the AgriLife center at Weslaco and University of Texas Rio Grande Valley.

Ragsdale said just over the last week the CDC’s Vital Signs website released information on how vectored diseases are on the rise throughout the country. These include tick-borne diseases in the northeast and outbreaks of Zika and other mosquito-borne viruses in Florida, Puerto Rico and Texas.

For more information, go to https://www.cdc.gov/vitalsigns/vector-borne/index.html.

“Our Western Gulf Center of Excellence in Vector-Borne Diseases is one of five such centers in the U.S. tasked with solving some of these problems,” Ragsdale said. “While ticks and human disease are a lower priority in Texas because there are just a handful of cases each year, ticks and tick-borne cattle diseases are a major concern.”