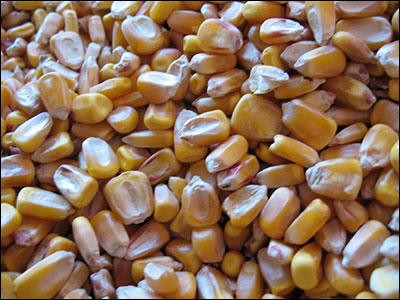 MANHATTAN, Kan. – Kansas State University researchers have verified a common belief that cleaning corn with common industry methods will reduce mycotoxins that may be present in the crop.

But they are also cautioning that highly contaminated corn still may not be safe for animal feed or alternate uses even after cleaning.

The term mycotoxins refers to toxic properties caused in plants by mold and fungi. They are prone to form on farm crops in areas of high heat and humidity.

“We have quantified that you can reduce mycotoxins by 30 percent by cleaning corn,” said Cassandra Jones, an associate professor of animal science and industry at Kansas State University.

Before this study, she said, there was little to no scientific literature indicating cleaning corn with a screen to divide good material from bad material was effective in reducing mycotoxin content. There have been studies to test the reliability of screening – as it is known in the industry – in the 1970s, but they were smaller studies that could not be replicated to achieve a high level of scientific validity.

“We are the first ones to do this, and we have fully replicated the results,” Jones said.

The work was done in the O.H. Kruse Feed Technology Center in Manhattan, a bio-safety level II facility. Aflatoxin is considered a Level II toxin by the U.S. Food and Drug Administration, and the university’s facility was the only place in Kansas with the proper equipment and security to conduct the study.

Ashton Yoder, a master’s student in animal science and industry, carried out the study, which involved screening more than 60 barrels of corn, each with 111 pounds of grain that was naturally contaminated with aflatoxin in 2016.

“It’s pretty normal for grain elevators, before storage, to clean that corn,” Jones said, “but we really didn’t know how important that cleaning was or what it might do to mycotoxins not only by removing that portion but also through the physical abrasion of putting it through the screener and the mechanical abrasion of getting it off the kernels.”

Prior to cleaning, the corn samples measured 1,000 parts per billion (ppb) of aflatoxin, which is five times more than the highest level allowed for use as animal feed. In the K-State study, researchers learned that screening reduced the level of aflatoxin to 700 ppb, a 30 percent reduction in mycotoxins.

Cleaning caused a 6 percent loss to the harvested corn, known as shrink. That 6 percent of product that is removed is known as screenings. Because screenings contain the highest concentration of mycotoxin, Yoder said, the amount of growth of mycotoxin in stored corn is potentially reduced.

But, he added, “What do we do with screenings? That’s the number one question you’re going to get from a producer.”

Screenings can be safely used as animal feed, but Jones notes that producers should “be careful when purchasing them, particularly in high mycotoxin years.” Beef cattle are among the least susceptible to mycotoxin, while swine are more susceptible.

Yoder said he’d like to study the potential uses of corn screenings as a biofuel or other alternate energy source.

“I haven’t seen any research on if they could use corn screenings as an energy source and maybe use that in years of high mycotoxin levels, assuming that the energy levels in screenings are higher than, say, a rice hull,” he said. “I don’t know the values for comparing those, but if I were to follow up with research, I would find a way to put a number on that.”

Jones suggested that other technologies common to the flour industry – such as optical sorters, density sorters and scrubbers – could be adapted for cleaning corn, and perhaps make more of it safe for feed or other uses.

“If we continue to see mycotoxin levels rise over time, it might become more and more economical to start having those kinds of conversations,” she said.

The research findings will be presented during the 50th annual K-State Swine Day, which takes place on Thursday, Nov. 16, in Manhattan. For more information on this year’s event, visit www.asi.k-state.edu/events/swine-day.