She’s Been A Good ‘Un

I mentioned in last month’s article that picking a time to cull cows could be tricky. It is usually a straightforward decision in cases of open cows, lame cows or those with bad dispositions. However, culling old cows that have been “good ones” and are still producing can be a difficult decision. Despite all the “chatter” from our critics, we are the ultimate animal welfare people! We want to treat animals humanely but still be economically responsible. So culling cows while they are still healthy and have value but before they suffer the ill effects of old age is a part of good management. 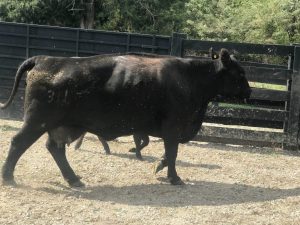 Let’s take the case of cow no. 311N (shown in the pictures) at the UKREC. She’s 14 years old and never had a bad day. Her time is spent grazing in the morning then walking over to the shade and lying down to “chew her cud”. She has also raised a good calf every year since she was two years old. So we’ve been good to her and she’s been good for us. 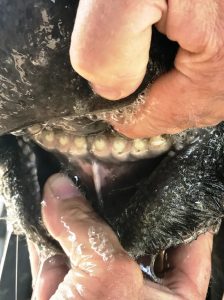 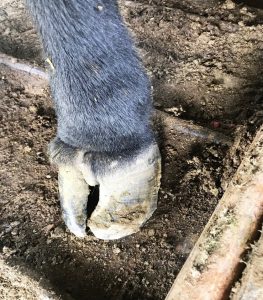 Cow 311N has a nice bull calf by her side this year but she’s showing her age. She is losing body condition for the first time in her life and is walking with a stiff gait. It’s time to make a decision about her future. A close look at her teeth (see picture) reveals that she has a “smooth mouth” (her teeth are worn off). Grazing anything but lush forage will be a challenge and going into the winter with a calf at side will not be easy. She’s not moving well either. The last picture shows that she has corns and abnormal hoof growth. So she may become lame very soon.

So what do we do? That’s not an easy decision but I think that we will keep her until she can wean this calf – put her in drylot and feed her if necessary. But we will not let her starve or die a slow death. You see; if we do this right, she will be culled while she is pain-free and still has value in the market place. And yes, she will be harvested as painlessly as possible, too.

Some opponents of animal agriculture might think that we should just let them die a slow death and return to the earth (and our water supply). But I’m kind of fond of 311N and don’t want to see that happen. We are committed to doing things the right way and, although it isn’t always easy, we should know better than anyone else about what’s best for our cows. After all, we have provided for some of them for many years on family farms (not factory farms!). Knowing when to get rid of the bad ones is easy but knowing when to cull older cows that have been productive is a difficult decision. Sooner or later we have to decide about the best course of action. Here’s to 311N and all of the good ‘uns out there!