Often a winter problem, ringworm is most frequently seen in young animals.

Ringworm, an unsightly skin disease, is contagious from animal to animal and can be transmitted between species. A person may be at risk for contracting ringworm when handling affected animals. Andi Lear, clinical instructor at the College of Veterinary Medicine at the University of Tennessee, says nearly any type of ringworm can be spread from one species to another. Animals, including humans, can get ringworm if they have a skin abrasion and a compromised immune system. 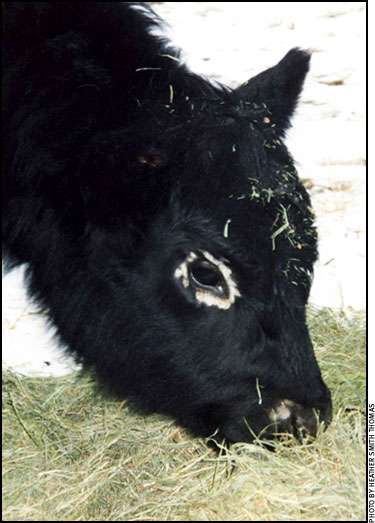 Ringworm lesions tend to be dry in the middle and flat and crusty on the outside, explains Andi Lear, noting that the fungus is self-limiting.

Ringworm usually appears during winter because the causative fungi thrive in a damp, dark environment.

“The literature tells us that in many herds about 20% of the cows may carry some of these fungi, but the organisms may not always cause ringworm except in susceptible individuals,” she says.

Young animals, such as a group of yearling heifers, may be more vulnerable, as are old or immune-compromised animals. Animals with skin abrasions — maybe scraped while fighting one another, when put through a chute or being moved through the brush — may get ringworm.

“Even though the fungal spores are present in the environment and animals are always exposed, if they have a functional immune system they fight it off,” says Lear.

Ringworm lesions tend to be dry in the middle and flat and crusty on the outside, she explains, noting that the fungus is self-limiting.

“The fungus is its own worst enemy,” she explains, noting that it requires aerobic conditions. “As it kills the hair follicles and affects skin tissue, it creates a crust and tends to suffocate itself. This is why the lesion is always spreading outward in [a] circular fashion — because it has to keep getting air. Eventually the immune system takes care of it, and it goes away.”

Ringworm may have economic importance if many animals in the herd have ringworm, indicated by hair loss in winter, or if it goes through a group of animals the producer wanted to sell. Even though it’s mainly cosmetic, animals with ringworm tend to bring a lower price at market. Bulls and breeding stock are harder to sell because no one wants to introduce this into their own herd. Ringworm is a problem in show animals and club calves; there are rules against bringing affected animals to a show because ringworm is contagious.

“Some people treat for ringworm, but many ‘cures’ are probably due to the fact that treatment was given just before the lesions started to resolve on their own. There are several types of disinfectants that can be applied topically to the lesions. Iodine solutions, lime sulfur, chlorhexadine, etc., can be diluted and sprayed onto the animal. It’s rare that anyone treats with a systemic anti-fungal drug because then you get into the issues of labeling and withdrawal times. We don’t have any really good anti-fungal drugs labeled for systemic use in livestock. Treatment is generally just topical application and tincture of time,” she says. “There is a ringworm vaccine that has been used in cattle and horses in Europe, but it is not available in the U.S.”

Lear says the best prevention for ringworm is to have healthy young animals, give them a clean environment and making sure the animals are not immune-suppressed.

“BVD (bovine viral diarrhea) or malnutrition may predispose young animals to ringworm,” she adds. “Having a good nutritional program is important.”

A calf that is orphaned on the range, whose dam doesn’t milk well, or any animal with a mineral deficiency could be a prime candidate for contracting ringworm.

Ringworm is fairly easy to diagnose because there are not a lot of other things that look similar, though scabies can sometimes be mistaken for ringworm. Scabies is very itchy, however, and ringworm is not. When in doubt, Lear says that a quick microscopic screening could solve the question, because fungi will be visible if it is ringworm.