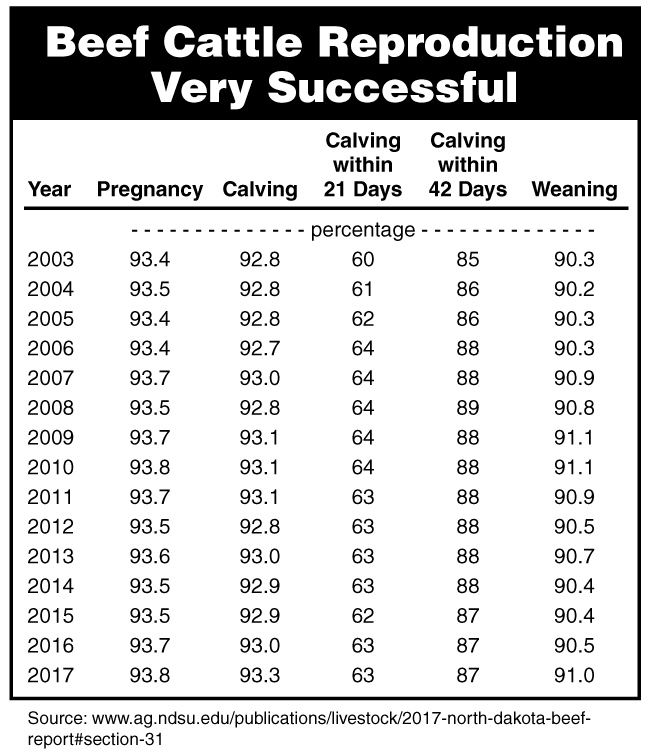 Producers may experience occasional issues, but as a whole, today’s cattle reproduce very well, which is indicated by the CHAPS data collection and analysis. Reproduction is measured by looking at the absolute values of a cow attaining a successful pregnancy and subsequent outcome, as well as the distribution of when a cow calves.

Cattle producers, as a whole, should be pleased with their reproductive rates. In fact, given the nature of reproduction, opportunities to improve for many producers are limited. That being said, the very purpose of benchmarking is to allow individual producers to assess their own operation and judge for themselves as to their success. If the operation is below the benchmark, then the opportunity for more input is there.

The NDBCIA uses the CHAPS program to calculate five-year rolling benchmark values for average herd reproductive performance. A closer look at the average actual pregnancy percentage benchmark shows not much has changed. Historically (10-plus years ago), the benchmark percentage was 93.4 for 2003, 93.5 for 2004, 93.4 for 2005, 93.4 for 2006 and 93.7 for 2007.

As noted, the ability for an individual cow to maintain excellent reproductive performance and raise a calf has been constant.

Another way to evaluate herd reproductive performance is to review the calving distribution within the herd. The annual distribution of calving dates within a calving season is equally impressive during the past year for those herds involved with CHAPS.

Despite good years and not-so-good years, the cow herd continues to reproduce. What does one say? Variables will change the reproductive rate in the small sense, but cows appear to have a very strong urge to reproduce.

The management practices will vary, as will the needed nutritional and health inputs among herds, but the bottom line is cattle reproduction is stable. The tools that modern-day cattle producers have available to them are extensive, and the implementation of herd-appropriate management, along with input from health, nutrition, reproduction and genetic professionals, has allowed for the evolution of a very efficient beef cow-calf industry.

The offspring of these herds are sold annually and drive the cattle industry. But, as with any business, astute producers always are aware that driving the ship means a watchful eye.

Change will happen, whether desired or not, but the cow herd seems to weather those impacts well. The challenge for producers is to keep up with the herd records and be informed, with less worry and less stress.