Use of ESAI can improve productivity and revenue. Recent research from Dr. Cliff Lamb examined the short-term economic impact of a breeding system that included FTAI + natural service or just natural service in about 1,200 females on 8 different farms (Table 1).[1] The breeding seasons began and ended on the same day in both groups on all farms. A partial budget was used to compare the positive economic impact (added revenue, reduced costs) with the negative economic impact (added costs, reduced revenue). Use of ESAI improved short-term returns by about $50 per cow.

At the same age, steers typically weigh more and generate $146.71/hd more revenue. Sex-sorted semen has been available for several years and is used most often in the dairy and beef seedstock industries. Conception rate of sex-sorted semen was initially too low for most cattlemen to consider, but the sorting/freezing process has improved considerably, and now conception rates are basically similar to conventionally-frozen semen. Male-sorted beef semen normally costs about the same as conventional, but female-sorted beef semen is about 50% more expensive ($25 conventional = $40 female sorted). Does the additional value of gender control pay for the added costs? In a typical 30-cow herd, 14 steers and 14 heifers might be weaned (93% weaning rate). Using the values in Table 2, the steers would be worth $12,961, while the heifers would be worth $10,907. Let’s assume that we implement an ESAI system AI using sex-sorted semen and a 50% conception rate to AI. We breed 6 cows to female-sorted semen and 24 to male-sorted semen. We can either use natural service to clean up or shift to a total AI system. Both systems are illustrated.

Shifting from natural service to an ESAI system has been shown to increase short-term revenue by about $50 per head. Shifting gender adds $24-37 more revenue per head, making the shift to ESAI even more attractive. Revenue can be even higher if the producer selects carcass-oriented genetics, ownership is retained, and the steers are fed to hit a high-value grid. Six females will be inseminated using female-sorted semen, but that will only increase the cost about 10% overall. Long-term, using maternally-oriented genetics on your top cows should increase maternal performance. Controlling gender offers exciting opportunities for all cattlemen to take their operations to the next level. 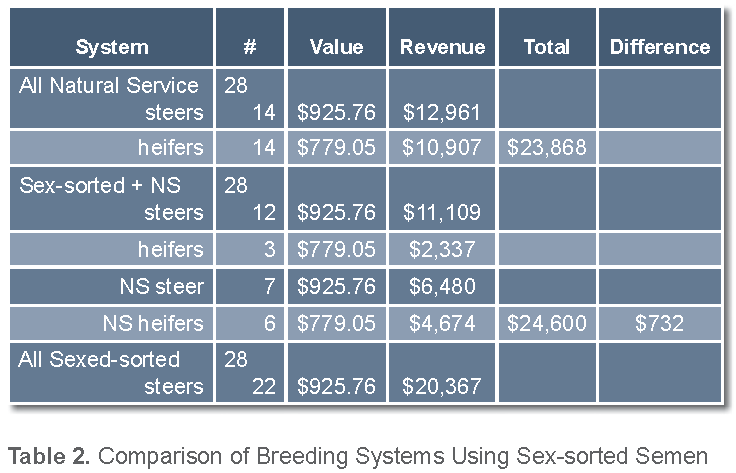