Not All Corn is Created Equal! 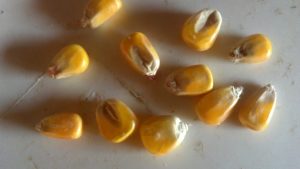 Since the completion of fall harvest it seems concerns and questions have been circulating throughout Ohio regarding varying levels of protein content in corn. In fact, corn quality – particularly protein content – has been the topic of conversation in some parts of the state off and on for some years.

As we’ve visited with feed mill operators, representatives from feed manufacturers, livestock dietitians and others who have had reason to test the nutrient levels of corn, hearing protein levels varying anywhere from nearly 9% down to slightly below 7% has been common. A representative from one large feed mill operation near central Ohio said they are using 7% as the default for balancing beef cattle rations this year, and used something slightly less than that last year.

The first question that comes to mind is, in the absence of a laboratory corn nutrient analysis, what default corn protein value do we use when balancing a beef ration? A Google search of “corn protein book values” resulted in numbers such as 9.8%, 9.0%, 8% and 8.42%. One source suggested simply that corn protein content ranges from 8 to 11%.

The second question that comes to mind is “so what . . . can a crude protein variation of a percent or two make much difference?” A look at the revised 8th edition of the National Research Council’s (NRC) “Nutrient Requirements of Beef Cattle” suggests it does.

A review of the daily nutrient requirements for an 1120 pound yearling beef animal that would be expected to finish at 1,400 pounds shows the need for 2.6 pounds (lbs) of crude protein (CP) to attain an average daily gain (ADG) of 3.4 pounds, and 2.8 lbs CP for 4.2 lbs ADG. This suggests a reduction in daily CP intake of as little 0.2 lbs would be expected to reduce ADG by as much as 0.8 lbs.

If the 1120 lb yearling beef animal referenced above is on a high energy corn based ration it could easily be expected to consume 20+/- pounds of corn daily. A variation of only 1% in CP in that corn will change the total amount of CP consumed by that animal by 0.2 lbs per day. As indicated in the NRC data above, enough to change the ADG of the animal by as much as 0.8 of a pound per day. At the same time, feed efficiency will suffer.

Protein supplementation is the most expensive nutrient addition to the diet on a per pound basis. Depending on the source, it may cost an additional 14 to 20 cents a day to balance this steer’s ration for protein. Performance drives profit and adequate protein is necessary not only in the finishing phase , but also in receiving diets where daily protein intake is critical to getting calves started on feed and calf health.

Corn varieties are being selected for increased yield, suitability for ethanol production, and early maturity to improve dry down. This results in greater selection for starch and less for protein. If you raise your own corn for feed,  a discussion with your seed dealer may be necessary to identify those varieties that have higher crude protein levels. If we’re feeding beef animals in a situation where optimum performance and efficiency is desired, perhaps the time has come that we need to be doing a nutrient analysis on our corn and other high energy feeds with the same frequency that we test forages!

For details on what might be causing the variations we’re seeing in nutrient content of corn across Ohio, see what OSU Extension corn specialist Peter Thomison and Alex Lindsey have to say about it in their article, “What accounts for variability in grain protein levels in corn?“