Much Ado About Single-Step?

Prepared by Tonya Amen, Ph.D. on behalf of the Texas Angus Association for the September 2017 Newsletter.

We Are Texas Angus.

I was asked to write this month’s article about “Single-Step”, but I suspect the real question is what happened with AAA EPDs on July 7?  It may be “Single-Step” that harnessed the most press and attracted most of the attention but there were several other major changes made to the evaluation at the same time. In the following paragraphs, I’ll give a brief description of single step and the advantages of moving to the new method and then describe the other changes that were made to the evaluation and their apparent impact.

A new, more streamlined method for incorporating genomic results into national cattle evaluations has been widely discussed not only in Angus publications, but also in the broader industry at numerous events and conferences for the last couple of years. You’ve likely heard it referred to either as “Single-Step” or as “BOLT” (BOLT is the name of a software program that some breeds will use to launch their single-step evaluation later this year; AAA uses University of Georgia software).

Prior to July 7, AAA GE-EPDs were generated using a multi-step approach, which necessitated semi-regular recalibrations (Figure 1).  To begin the calibration process, all available pedigree and performance information was used in a “classic” genetic evaluation (A), which resulted in what were essentially “old-school” EPDS without genomics (B).  These “classic” EBVs were then used along with genomic results (SNP) to estimate the effects of those SNPS on the various EPD traits (C).  These SNP effects were then added together to arrive at a molecular breeding value (MBV).  The last step in each recalibration was calculate new correlations and heritabilities (REML in D, below).  Finally, the pedigree, performance data and MBVs were run together each week to produce GE-EPDs (E).  The results from this method were state-of the art at the time, and provided an improvement in the accuracy of EPDs which were previously estimated with only pedigree and performance information.  But, the research required for each calibration was lengthy and costly, plus it typically left some uncertainty with breeders awaiting the timing of its release.

With the migration to the Single-Step method (Figure 2), a more streamlined process was established.  Each week, pedigrees, performance information and genomic results will all be used in a single step to generate GE-EPDs.  Many articles have been written about the benefits of this computational advancement (see Hermel and AGI publications in the references, to name just a couple), so I’ll summarize the benefits just briefly

Though I’ve heard a lot of cussing and discussing genomics, the July 7 release represented a very major overhaul of several of the highest profile EPDs. In addition to changing the way that genomic results are accounted for in the evaluation, traits were added to several models, new correlations and heritabilities were released, the economic assumptions behind the $-Value Indices were updated AND the number of genomic results entering the evaluation had more than tripled since the previous recalibration. That’s a lot to try to absorb and understand (not to mention explain to your customers).

The good news is that the evaluations should be less dramatic going forward, with small changes resulting from performance data and weekly accumulation of genomic results.  There are winners and losers each time a change this substantial is made, so I won’t try to minimize the significance for those who may be disappointed in the changes.  However, recognize that there were a lot of things at play in the changes that occurred, and teasing out what caused the changes in specific animals is a difficult (if not impossible) mission.  Keep in mind what you’ve come to know about EPDs: 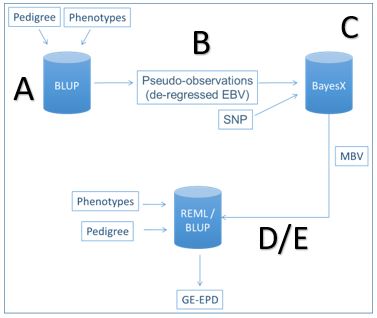