Heat stress is a principal factor limiting production of animal protein and negatively affecting health and welfare of cattle in subtropical and tropical regions. Detrimental effects on livestock productivity associated with heat stress are expected to intensify dramatically and expand into currently temperate zones upon the realization of predicted climate change (IPCC, 2007). Most animal-producing areas in the U.S. are predicted to experience extreme summer conditions (Luber and McGeehin, 2008) and by 2100, average temperatures in the U.S. are projected to increase 2 to 6 degrees Celsius, depending on the emissions scenario and climate model applied (USGCRP, 2009). The number of days with maximum temperatures above 32 degrees Celsius (or 90 degrees Fahrenheit) is, also, expected to increase. The southeast and southwest areas of the U.S. currently average 60 such days per year but are projected to experience at least 150 such days a year by the end of the century.

Development of effective strategies to improve the ability to cope with heat stress is imperative to enhance productivity of the U.S. livestock industry and secure global food supplies. Substantial differences in thermal tolerance exist among breeds and among animals within breeds indicative of opportunities for selective improvement. For example, Bos indicus cattle exhibit increased resistance to many environmental stressors relative to Bos taurus, but tend to have slower growth, lower fertility, and poor meat quality as they have not been as intensively selected for these traits as specialized Bos taurus breeds. Use of genomic tools to produce an animal with superior ability for both thermal adaptation and production represents an energy-efficient sustainable approach to meet the challenge of global climate change.

Thermoregulation is a process in which environmental information provokes a cascade of appropriate responses to maintain body temperature within the narrow range necessary for optimal cellular and molecular function. This is accomplished by jointly regulating heat production and heat loss. To reduce internal heat production beef cattle will decrease physical activity; reduce feed intake and downregulate biological functions associated with growth, reproduction and immunity. Cattle will also increase blood flow to the skin and increase evaporative heat loss through sweating, panting, and behavioral wetting of the skin to increase the heat exchange with the environment. Hyperthermia results when body temperature increases above normal range despite these adjustments. Improvements in production, such as increased growth rate, lead to increased metabolic heat production, and exacerbate the problem of thermoregulation. A good example is the negative genetic correlation between milk yield and the ability to regulate body temperature during heat stress in dairy cattle. Unless accompanied by changes that increase heat loss capacity, improvements in production make animals more susceptible to hyperthermia during heat stress.

Quantitative measures of the thermal environment and the animals’ responses to heat stress are needed to assess thermal tolerance. Commonly used measures of the thermal environment are temperature, humidity, solar radiation, and wind, while coat characteristics, body temperature, skin temperature, respiratory rate, and sweating rate describe thermal environment from an animal perspective. Riley et al. (2012) reported heritabilities of 0.19 and 0.27 for rectal temperature and coat score in a Brahman x Angus crossbred population, and a genetic correlation of 0.24 between these traits. Dikmen et al. (2012) reported heritability of 0.17 for rectal temperature in dairy cattle. Both studies were conducted during hot and humid summers in Florida. These heritabilities demonstrate genetic variation and support the hypothesis that selection for improved thermal tolerance is possible if animals with genetically superior core body temperature regulation when exposed to environmental thermal stress can be identified. Selection for improved thermal tolerance using classical approaches is not feasible due to cost and difficulty of collecting appropriate phenotypes on large numbers of animals. To determine an animal’s response to heat stress, and therefore to assess its thermal tolerance, high-frequency measurements of relevant traits are required, hence the importance of fine-scale, high-throughput phenotyping.

An exploratory study was conducted at the University of Florida (UF) Beef Research Unit in the summer of 2015 to demonstrate the feasibility of using iButtons devices to record vaginal temperature over a period of five consecutive days and assess the phenotypic variation in the UF multibreed population. Vaginal temperature was measured at five-minute intervals for five days on 191 cows, which ranged in breed composition from 100-percent-Brahman to 100-percent-Angus. Ambient environmental conditions were monitored using HOBO data loggers, which continuously record temperature, humidity, solar radiation, black globe temperatures, and wind speed. The temperature humidity index (THI) was calculated as THI = (1.8 × T + 32) – [(0.55–0.0055 × RH) × (1.8 × T – 26)] where T = air temperature (°C) and RH = relative humidity (%). 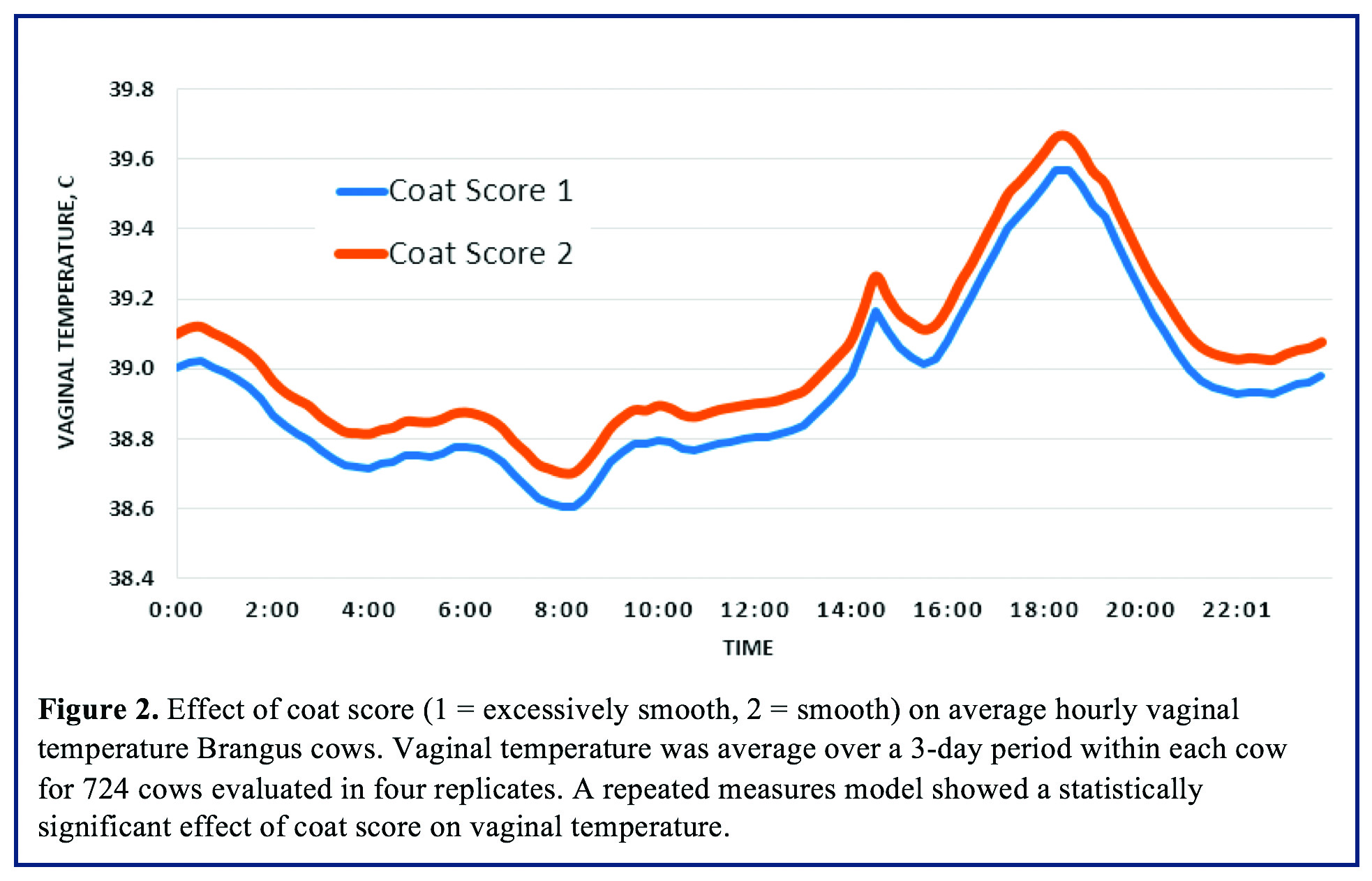 We are in the process of collecting body temperature data and other relevant phenotypes on another set of 2,000 animals. The ultimate goal is to integrate all detailed phenotypes collected with high-density genotyping and gene expression analysis to understand the genetic architecture of thermal tolerance. Critical genomic regions targeted through this process will be sequenced to identify causal genetic variants controlling thermal tolerance. We will use this information to develop tools to be used in selection and management programs designed to mitigate the effect of heat stress in indicine-influenced beef cattle populations that predominate in hot and humid regions of the U.S. and globally. These regions in the U.S. contain approximately 50 percent of beef cow-calf producers and 42 percent of beef cows, for which a substantial fraction are Bos indicus influenced (Morrison, 2005). Economic losses from heat stress in the US beef industry were estimated over a decade ago to average $369 million (St-Pierre et al., 2003).