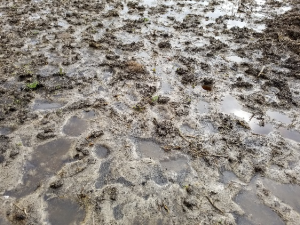 It wasn’t too long ago that you were hearing that some parts of the state were actually still in drought status. I believe it is safe to say, without even looking it up, that that is no longer a problem. Instead, completely thawed and very soggy ground is prevalent.

It’s been a few years since I’ve seen this wet of an early spring. In fact, maybe about twenty years. We are quite often still blessed with some free “concrete” this time of year. As much as I like the warmer days right now, I probably wouldn’t turn down some frozen ground to reduce mud and the impact of very saturated ground. One guy told me that if it were just a hair warmer, he might go barefoot since he was tired of getting his boots stuck in the mud.

If you are not prepared for such wet weather, then it can be quite frustrating. Mud is certainly worse around feeding, watering, and other concentrated areas. One of the best solutions for these concentrated areas is to install a conservation practice called a Heavy Use Area Protection (HUAP), e.g., feed and watering pads. HUAPs are fairly simple to construct and better yet, very economical. Retired NRCS technician Mary Lee Smith recently noted that HUAP’s were the best thing since sliced bread; just a fantastic practice!

You start by leveling the area to remove excess organic matter and manure, and also top soil if necessary to get a firm foundation to build on. Geo-textile fabric is the first layer, then crushed limestone, which is usually #53’s and applied 6 to 8 inches deep depending on the site and conditions. Follow by topping with a couple inches of lime. The lime makes it easier to scrape and/or clean later and a little lime spread out on the field or pasture certainly won’t hurt anything. The lime actually packs down very well when it’s dry. Tractor tires or hooves can also do a good job of packing while still under dry conditions, so it’s best to build during the summer, long before you would need it.

These pads supply a firm well-drained area for feeding hay in rings, silage in bunkers and for areas around watering tanks and existing feed bunks. Similar designs can also be used for concentrated walking areas and lanes. If you happen to be on softer or consistently wet soils, then a layer of #2 lime stone may be needed underneath for a firmer base over the geo-textile fabric. HUAPs are available for cost-share through some NRCS and conservation district programs; contact your local USDA field office for more information.

Due to drier conditions in parts of Indiana last August and September, stockpiled forage, additional hay cuttings, and fall annuals were just not what they should have been. This lack of sufficient growth reduced fall and early winter grazing days and root growth. That growth is important because it not only provides some valuable forage to graze, but good top growth means good root growth. The combination of the two is stabilizing when grazed under wetter conditions. The less growth present above and below the ground, the more potential damage to a field when livestock are present.

Truthfully, once the frost layer breaks through and conditions are wet like they are right now, you are usually better off having animals off the pasture and in a sacrifice area, especially if you are working with soils with fragipans. Soils with fragipans (a thin and very heavy layer of pure clay) tend to hold the water more at the surface level, keeping the top layer very wet and more likely to be damaged by livestock. It is better to sacrifice a small area than a whole field that might require totally replanting afterwards.

I have seen some poorly chosen sites utilized for sacrifice areas that have been left in a horrible disturbed condition. When areas such as creek bottoms, woods and erodible sloping ground are used as a sacrifice area, water quality is almost always adversely affected. Try to choose a stable site that is suitable for these areas and rotate them if possible and provide a grass filter between the site and any water bodies. Sometimes, these sacrifice areas can be paddock(s) that you plan to renovate anyway. Ideally, plant a cover-crop such as oats, sorghum-sudan or millet on the area after excess manure is collected and spread appropriately where needed. These areas can then be grazed later in the year.

In the southern part of Indiana, we are getting some early green growth already. This is certainly a delightful attraction for grazing livestock and also for producers who are already running short on hay. It is ever so tempting to just open the gates and let them have at it. Keep in mind, most pastures are under a little more pressure than usual due to the lack of normal growth last fall. They really need some extra rest prior to turnout this year.

So, here is how to answer the real question of “when do I start grazing?” Preferably, you want to start grazing when the plants are about 6 to 8 inches tall (tall cool-season forages such as fescues and orchardgrass) and the ground is dry enough to support the weight of the livestock without causing damage to the forage base. On some soils, especially ones that tend to be wet, the forages may be closer to 10 inches or more before conditions will allow for grazing with no damage to plant roots and crowns or cause additional compaction. The more residue left from the previous year and consequently the more root base, the earlier you can usually graze without damage, which is basically the same concept for grazing stockpiled forages on non-frozen ground all winter.

In a well-managed, rotated grazing system you can start grazing fairly early as long as you use some control…animal control. Don’t leave it up to the cow, you have to manage her! Starting early and making sure to maintain stop grazing heights for the forages is really the critical issue, but it also helps to keep the forages from getting too far ahead of you before you graze them. Fields with more rest and more residue would be ready earlier and tighter grazed fields will be ready later.

If you are dealing with wet conditions and less residue then you would be better off waiting until forages are at least 6 to 8 inches to provide better, thicker growth to hold up the weight of the grazing animals. I would still promote grazing for short periods, keeping the animals moving and never grazing closer than 3-4 inches, whenever possible.

Recently, in a small group the question was asked why ignorance and apathy was such a problem today. One young guy quickly remarked, “I don’t know, and I don’t care.” Don’t let that be you. When we harvest forages by grazing livestock, we are harvesting energy from the sun and converting it to useful products through livestock. Remember, we must manage that solar panel. Keep on grazing!