After focusing on cattle inventory in February, summer stocker programs in March, and fall calving cow-calf profitability in April, I want to focus more specifically on the market this month. Overall, the first four months of 2018 have not been kind to cattle producers. Fed cattle prices fell by more than $10 per cwt from late February to early April. While slaughter has been up in 2018 (especially for cows), uncertainly about trade was also at play. Cash fed cattle prices had actually improved some by early May.

It’s really the expectation for late fall / early winter fed cattle prices that is driving our current feeder cattle market. As I write this (May 9, 2018), December CME© Live Cattle futures had decreased by $7 to $8 per cwt from where they were in late winter. This translates back directly into feeder cattle values and I think we have seen this in local markets. Note the drop in prices for 850 lb Medium / Large Frame #1-2 steers in Figure 1. The April price may be a little deceiving as prices improved through the month, but it definitely makes the point. Lower expectations for fed cattle get bid directly into feeder cattle prices. Slightly higher grain prices have also not helped the feeder cattle picture, but I view this impact as secondary. 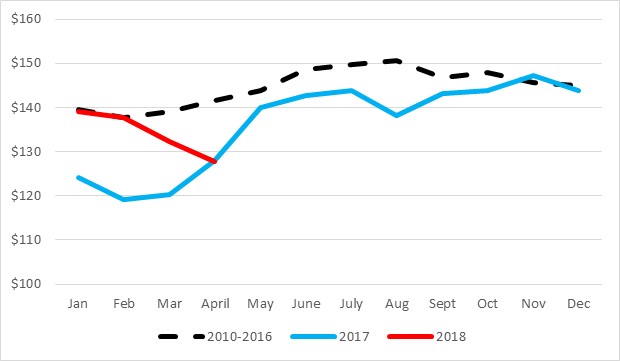 While calf prices have not been hit nearly as hard as heavy feeders, I do think they felt some impacts as well. Calf prices usually improve from February to March as we move closer to grass. The dotted line in Figure 2 shows this over the time period 2010 to 2016. Note the calf market was basically flat from February to March in 2018. Fall CME© feeder cattle prices fell in response to fed cattle markets and this lowered the expected value of spring calves when they came off grass in the fall. I think this worked to offset the typical spring price improvement we see as cost of gain decreases with the start of spring grazing. This was probably especially true in 2018 as forage growth has generally been delayed compared to typical years. 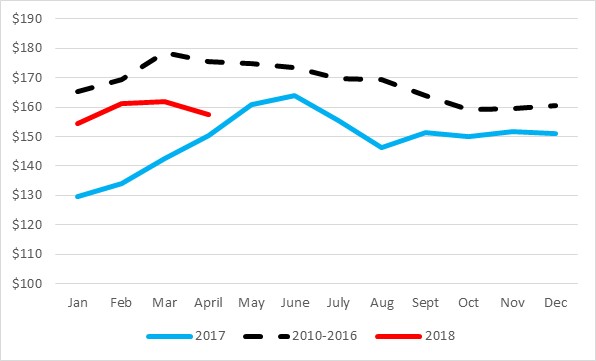 While trade discussion has deservedly gotten a lot of attention this spring, I maintain that supplies are our largest problem. The cow herd has grown, so cattle-on-feed numbers have grown, and that has led to increased beef production. Unfortunately, the pace of this growth is likely to be even larger this spring and early summer than was seen in the first quarter. Plus, we are going to see more pork and poultry production as well.

The good news for us in the feeder cattle markets is that the seasonal summer fed cattle lows have already been priced into feeders. Our current market is being driven by fall fed cattle market expectations and the year-over-year increases in beef production will have moderated some by then (they will still be higher). So, while it’s difficult to forecast increasing calf prices after initial placement of calves on spring grass, I do think we have a good chance of seeing our market for heavy feeder cattle improve between now and the end of summer.