This column has been regularly monitoring beef cow slaughter through 2017 in an effort to get some insight into what 2018’s starting beef cow inventory might look like. For a little perspective, based on data between 1987 and 2016, the equilibrium slaughter rate runs around 9.3%.

In other words, bigger slaughter, as a percentage of the cowherd, means a smaller cowherd in the following year, while a rate slower than 9.3% spells likely expansion. The data are fairly reliable with only a few outliers (1993, 2015 and 2016).

As a reminder, 2017’s starting beef cow inventory was pegged at 31.21 million cows.  Accordingly, a 9.3% slaughter rate equates to 2.91 million cows. From the get-go, beef producers proved that 2017 would be another year of rebuilding. Beef cow slaughter ran behind the 9.3% equilibrium pace through the year. However, what’s interesting are the month-over-month differences between the monthly equilibrium expectation and actual slaughter rate through the year. 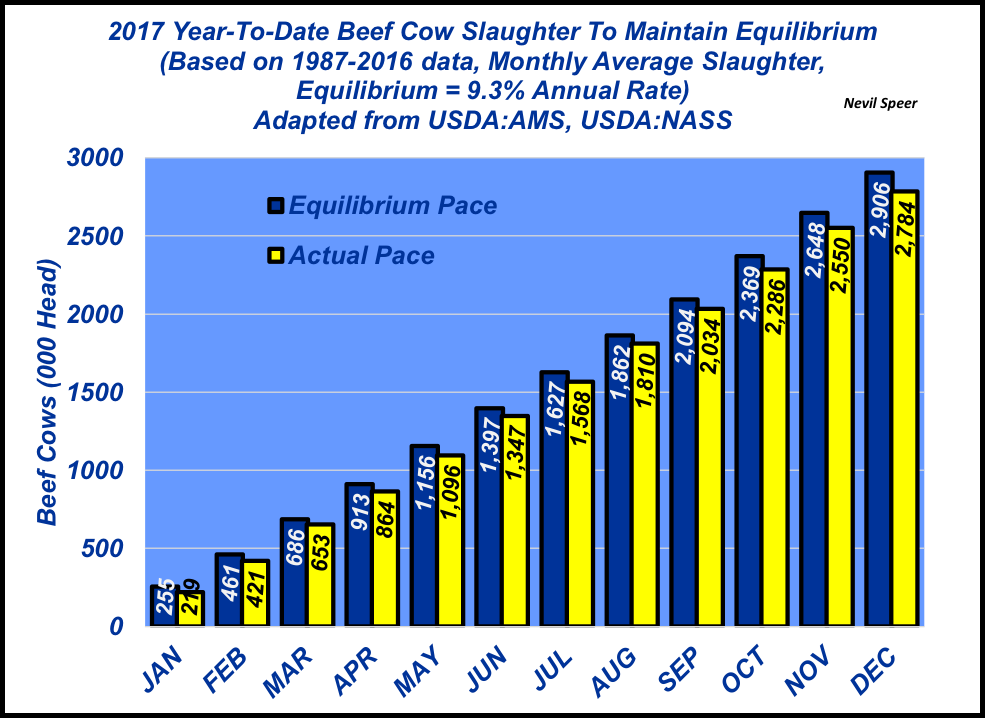 That is, the first nine months saw slaughter track fairly closely with monthly expectations. The January-September total ran about 97% of expectations. However, October and December marked only 92% and 91% of the expectation, respectively.

The primary question surrounds the ‘why’ of that occurrence. Are producers truly hanging on to cows to rebuild the cowherd? Or did they see tax reform on the horizon and decide to defer income to 2018? Or some of both? Much of that question will be answered in coming months – and that means analysts need to watch beef cow slaughter carefully during the first several months of 2018. What’s your take on beef cow slaughter in 2017?