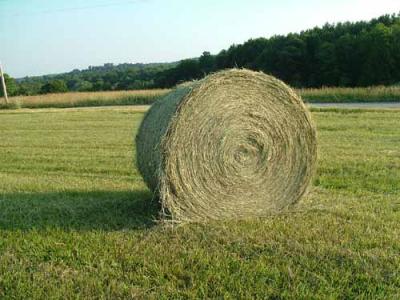 Severely tight hay reserves will undoubtedly cause many farmers to aggressively put up hay this spring. When the weather is right and hay fields are mowed there will be many farmers looking over the fence at pastures as an opportunity to make more bales. While it is important to get hay reserves built back up on your farm, I would caution producers against baling pastures.

Illinois is not home to many pasture-rich cattlemen. Thus, baling pastures will likely rob forage that could be consumed by cows during the grazing season. Cows harvesting pasture is much more efficient than a mechanical harvest. The last thing any farmer wants to do is bale grass in the spring to feed it in the summer.

Next, taking hay off of pastures is not free. For each ton of dry hay baled, approximately 40 lbs. of Nitrogen (N), 20 lbs. of Phosphorus (P2O5), and 50 lbs. of Potassium (K2O) are removed. Using current fertilizer costs, the total nutrient value of hay harvested per ton would be around $38/dry ton. A big round bale that weighs 1,200 lbs. at 85% dry matter would remove slightly over $19 of N, P, and K per bale.

While many farmers will bale their own hay and tend to not value the cost of the harvest process, it is important to consider. According to the last-updated figures provided by University of Illinois’ FarmDoc for cost of harvesting forages, a harvest process of mow-rake-bale would cost approximately $50 per acre. If you harvest 2.5 bales per acre, the harvest cost per bale would be $20 per bale.

It is simple to combine the cost of nutrient removal and the cost of harvesting to figure a rough cost per bale. So, add the $19 in removal of nutrient to the $20 in harvest cost and the total cost of a bale sitting in the field is $39 per bale. Other costs that should be considered would be cost to move bales from the field to the storage site, cost due to storage loss, and cost due to waste at time of feeding. These costs can easily double the cost of a bale of hay by the time it is ran through a cow.

Now, with all that said, the numbers behind the cost of haying pastures can look as good or as bad as you want to interpret them to be. The good or the bad depends on what you are comparing it to. I think there are some other factors that one should consider when thinking about baling pastures.

I believe a big factor to consider is the stress that total removal of forage puts on the pasture when the growing season is going around the second turn. In the backstretch of the grazing season, is the “summer slump.” The summer slump is when cool season grasses slow in productivity because of the hot temperatures of the summer months.

Mowing pastures to the ground to harvest hay just prior to the summer months can put severe stress on the plants and ask them to devote serious energy to replenishing leaves to harvest sunlight for photosynthesis. This takes away from root reserves and will make the plant more susceptible to drought. Taking hay off of pastures opens the ground up. This often allows sunlight to reach the soil directly, heating up soil temperature and hastening the slowing of cool season grasses. This stress and exposure can stress cool season pastures and drastically slow down regrowth.

Knowing the stress that baling pastures can put on future forage regrowth, I think it is important to consider some alternatives to baling pastures. Many cattle producers may have sacrifice paddocks or small areas that need renovation. These areas could easily be used to grow summer annual forages like sorghums and millets. These forages could be grazed in the summer slump allowing cool season forages to stockpile for fall and winter grazing, thus extending your grazing season. Extending the grazing season will lead to feeding less hay.

Other alternatives to baling pastures could be harvesting a small amount of acres for corn silage. Not only does harvesting corn silage address immediate needs for feed inventory, but it also opens acres to allow for a seeding of oats and turnips to be used for fall and winter grazing.

Can your farm better utilize crop residues for grazing or baling? Would an addition of a water source allow for considerably more cornstalk grazing in the fall? Could baling cornstalks help fill winter forage needs? Is there an opportunity to seed cereal rye after a corn harvest to result in late-fall grazing and spring harvested forage? Have you implemented a rotational grazing system to maximize current pasture acres? These are all questions that should be part of the conversation when looking to rebuild forage stores.

While the urge to bale pastures will be as strong as ever this spring and summer, I would recommend looking at other options to build forage stores. Knowing most Illinois cattle farms are already short on pasture, I believe it is the wrong place to look for filling forage needs.