Heifer Development: Managing for Her Future

A replacement heifer represents the most costly improvement in a herd’s genetics. Some of the more important influencers that are critical to retaining these genetics over time include development, conceiving early in the breeding season, calving ease and maintaining good body condition prior to breeding, especially between 2 and 5 years of age when the heifer is still growing. For this article, I want to focus on development and conceiving early in the breeding season.

Because reproductive traits are lowly heritable, this forces cattle producers to be better managers within the environment and to respond to environmental changes.

What does a heifer that has been successfully developed look like?

Is she the heifer in the pen with the deepest rib capacity, cleanest fronted, moderately thick over the top and down through her stifle, level through her top and from hooks to pins, and the soundest footed? No!

With little regard to phenotype, she is one that reaches puberty, weighs approximately 65 percent of mature body weight, is a body condition score 5 or 6, is between 13 to 15 months of age at breeding, conceives within the first 21 days of the breeding season for the first four breeding seasons, is a body condition score of 5 or better prior to breeding every year after, and weans a calve for the next eight years. Am I asking too much?

With replacement heifers, the goal is to have all of our heifers reach puberty by the start of breeding season. This is controlled by three factors: body weight, age and breed. 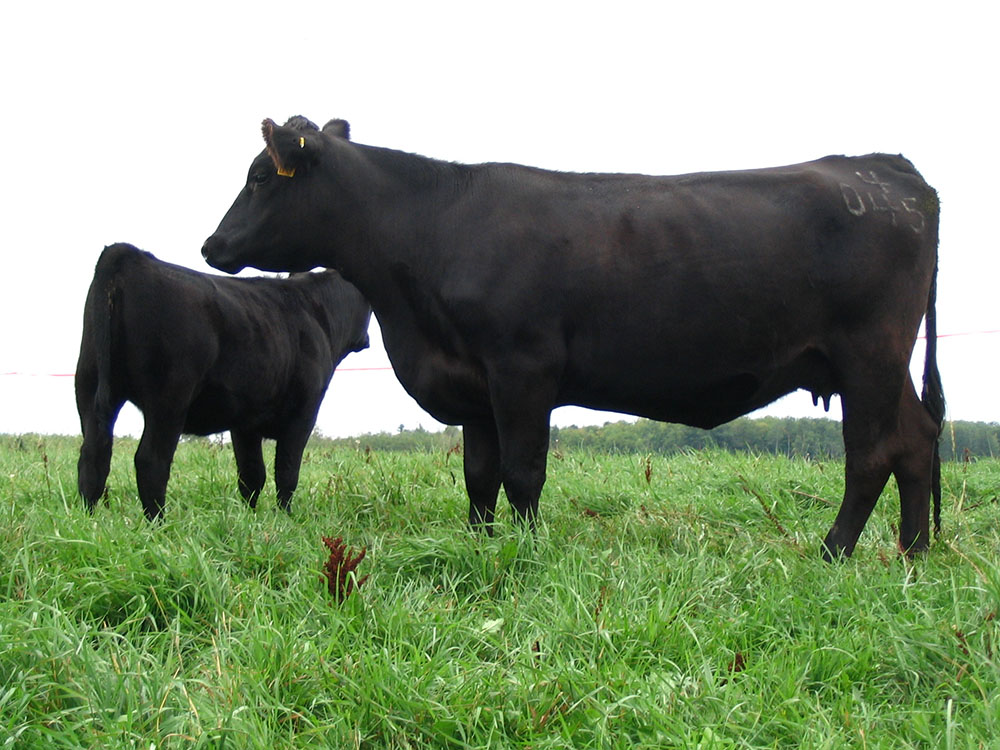 Heifer body weight has the biggest impact on puberty age.

Research conducted in the 1980s indicated heifers should weigh approximately 60 to 65 percent of their mature body weight to ensure first estrus has occurred prior to breeding.

The concern with developing heifers to a lighter body weight at breeding is the calving body weight. Heifers should reach 85 percent of their mature body weight at calving to ensure their pelvic area has developed to a size big enough to deliver a calf. Reaching this target calving weight will ensure the heifer is closer to reaching her potential mature weight so the physiological stresses, such as calving and lactation, in addition to maintenance and growth, do not have a negative impact on fertility.

Figure 1: Percentage of Timed-AI or natural service bred replacement heifers following the first breeding season retained in the herd thru 5 years of age.

If you own scales, know what your cows weigh and monitor heifer body weight so you know if the heifers are reaching their target breeding body weight. If you don’t, use sale barn receipts from your latest cull cows sold to give you an indication of cow body weight. But don’t guess. At a field day at the Hill Farm Research Station in north central Louisiana in 2016, producers were asked to guess the weight of two mature cows. Of the 150 respondents, 82 percent guessed too low with 48 percent of them missing the weight by more than 200 pounds. My experience is most producers underestimate the mature weight of their cows. If you underestimate your mature cow body weight, you will underestimate target heifer body weight. As a result, you won’t develop heifers to their true target bodyweight.

Conceiving Early in the Breeding Season

Lastly, I want to leave you with this recommendation: only keep the heifers that conceive within the first 21 days of the breeding season.

Preliminary data out of LSU showed that, after having their fourth calf, 73 percent of the heifers conceiving to timed-AI during their first breeding season and developed to weigh more than 65 percent of their mature body weight at first breeding remained in the herd. Only 43 percent of the heifers that did not conceive to timed-AI but were bred by natural service within a 75-day breeding season remained in the herd. From a heifer longevity standpoint, developing heifers to 65 percent of mature body weight or greater increased the percentage of those heifers remaining in the herd through 6 years of age by 30 percent.

Developing heifers to reach 65 percent of their mature body weight and are 13 to 15 months of age at first breeding will increase the likelihood that those heifers have reached puberty and conceive within the first 21 days of the breeding season. By keeping only the heifers that conceive early on in the breeding season, you can significantly increase the likelihood of retaining those heifers longer in the herd and improve the longevity of your investment.