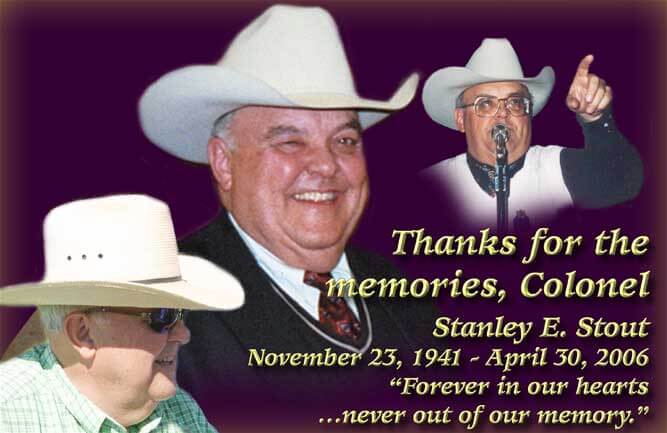 Stanley E. Stout; a name that proceeds itself with great honor in the agricultural industry. Mr. Stout was a man taken from the livestock industry too young but he leaves a lasting impact on all who walk through it. A husband, father, brother, son, and amazing friend, Stanley was all of these and many more.

Stout was a member of the American Hereford Association, the American Quarter Horse Association, the National Auctioneers Association, the Kansas State Ahearn Club, the Livestock Marketeers and the Kansas State Block and Bridle Club. It is no surprise this man was well known by many in the purebred industry and well respected across the country. He spent a majority of his time on the auction block selling purebred livestock. This was his profession and his passion. He was one of the best of his time and still leaves an impact on those who got the chance to work with him. He died at 64 years of age and in the prime of his career.

It’s easy to remember the things that he did, but his legacy did not stop on that hot day of 2006. He continues to find ways to give back to the agricultural community. He is recognized and on display at The American Royal. He had called the premium livestock auction for many years and was on their board of directors. They also established the Stanley E. Stout Supreme Heifer Memorial Scholarship in his memory.

To this day he can be found in their museum where you can hear and see him auctioneer next to a life-size cardboard cutout. He had an undying love for the Kansas State Wildcats. Himself being a KSU college of Ag alumni and large supporter of the Department of Animal Science. The college holds a tribute to his legacy with the Stanley E. Stout center for livestock marketing and education building. This is used to market the college’s livestock and as a hands-on-learning facility for students invested in the college of agriculture.

All who had the honor to know or work with this incredible man were touched by his presence. He had a remarkable sense of humor and an infectious laugh, he had a way of making life and work more interesting. Working and traveling every day without him simply isn’t the same. Many hearts were broken April 30, 2006, a few days later more than 1,000 people crowded into the rainy Flint Hills Rodeo Grounds to hear Stout’s heart racing chant one last time. With not a dry eye in the house the legend was put to rest.

If there’s an auction block beyond the pearly gates we all know where to find Stanley E. Stout on the other side. Happy 76th Birthday Colonel!