Getting cow nutrition right from the start

Research from the past several decades shows that body condition and nutrition of the mother can make a difference in traits exhibited by the developing fetus. Studies at several universities have explored this phenomenon in beef cattle, showing that what a pregnant cow eats — or more importantly, doesn’t eat — during various stages of gestation can have long-lasting effects on her calf’s future.

That’s because most organs and body systems of the fetus are formed early. Metabolism, muscle mass and consistency, and other important factors that become permanent traits for that calf, are also influenced by the amount and quality of nutrients the dam consumes during the first and second trimesters.

However, how that nutritional restriction affects the fetus can vary, depending on timing, severity and duration of the restriction. What’s more, those effects are different depending on the traits.

For example, research clearly shows that fetal programming has a definite effect on calves’ subsequent body composition and health. When it comes to carcass traits, however, the jury is still out.

Many of the early studies in the U.S. on fetal programming looked at production systems in the arid West. Many producers calve early, so they can take advantage of grass with cow-calf pairs when it is most productive. Thus, females on a range- or forage-based diet tend to be undernourished during the first third of gestation (late summer), when forages may be dry, and some winter feeding programs may be inadequate for the cows’ and fetuses’ needs.

Many producers supplement cows during the last third of gestation to bring body condition scores up before calving. For optimum future health of the fetus, however, this may be too late.

The first cattle studies in Wyoming were during seven years of drought. The quality of calves born during those years was significantly reduced, even though the body condition of the cows at calving was adequate. Those cows had been undernourished earlier, however, on dry rangeland.

The first half of gestation includes development of the placenta, which carries nutrients to the fetus. Many fetal organs develop the composition of cells necessary at this time to function at a normal level. The Wyoming trials found that if cellular composition is altered, even if fetal size is increased during late gestation with supplemental feeding, the cells will still be abnormal.

In one study, a group of range beef cows from the University of Wyoming were underfed from Day 30 to Day 125 of gestation. It is during this period that skeletal muscle fibers develop in the fetus, and the pancreas, kidneys and brain are developing.

The pregnant cows were split into two groups. One group was underfed from Day 30 to Day 125, and the other group fed a normal maintenance ration. At Day 125, the researchers collected some fetuses and fed the remaining undernourished cows — from Day 126 to term — to bring body condition scores up to equal the normal group by Day 220. This is similar to what happens on some ranches, when producers supplement thinner cows during the latter part of gestation.

Cow age affected the fetuses collected at midgestation. Younger cows — first- or second-calvers — gave different results than cows that had produced three or more calves prior to the study. By midgestation, fetuses of the young cows were significantly smaller than the fetuses of control-fed cows due to slower intrauterine growth.

Up to about 4 years of age, cows are still growing, so some nutrients go toward continued growth of the cow’s body rather than to her fetus. Fetuses from those individuals were significantly deprived of nutrition, decreasing their growth rate. Older cows had fetuses near normal size at midgestation.

The growth-retarded fetuses from young cows had enlarged hearts, altered pancreatic and kidney development, and larger brain size. The brain tends to grow at a normal rate even if the fetus is undernourished.

In a recent study at South Dakota State University, scientists implemented metabolizable protein restriction in first-calf heifers during mid- and late gestation, and then they followed the calves through the feedlot to analyze performance and carcass data. SDSU graduate Janna Kincheloe worked on this project for her doctoral dissertation. 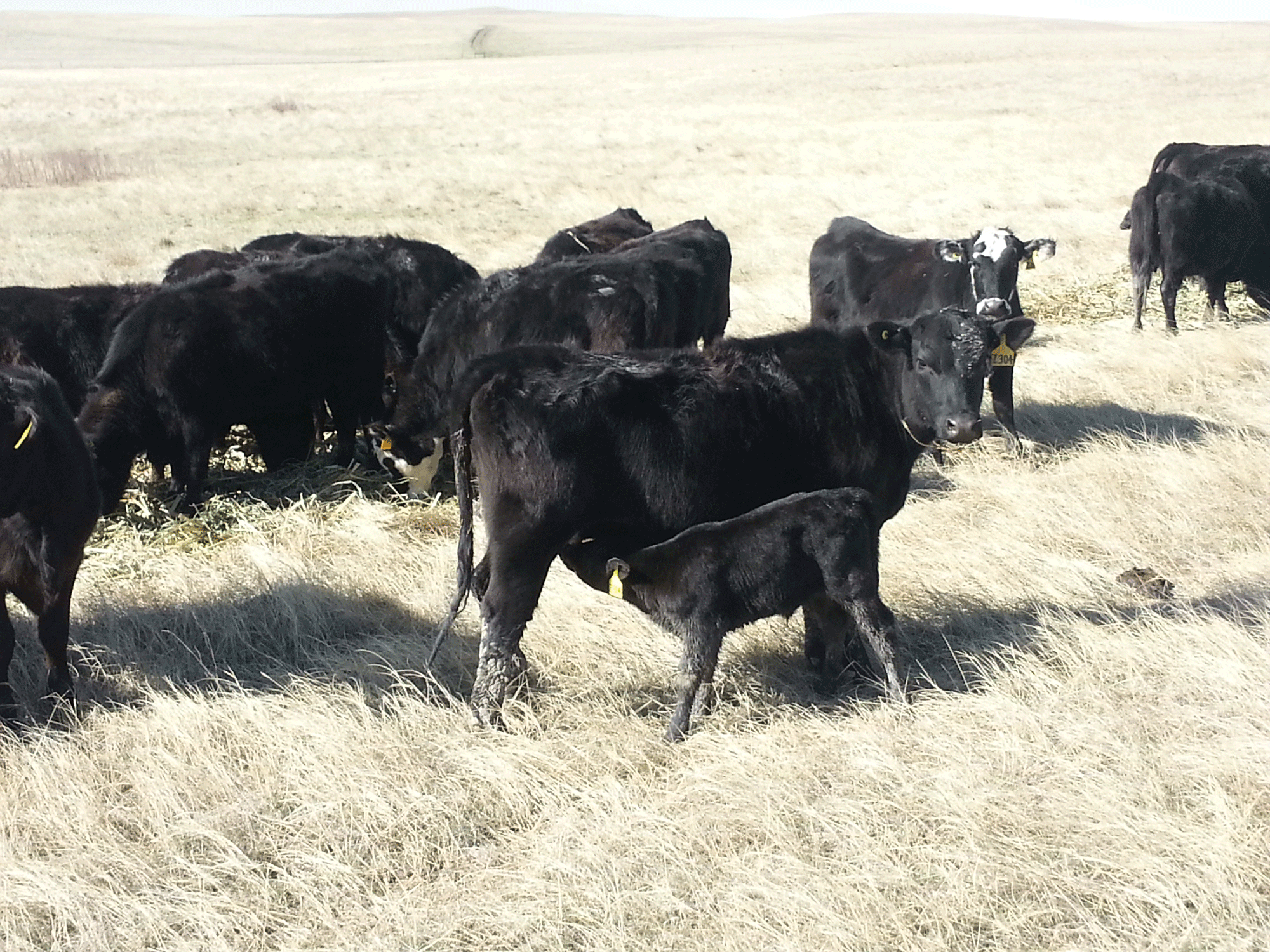 Many ranchers ask their heifers to get by on dry pasture for much of their pregnancy, and then the ranchers supplement during the last trimester to regain body condition. Research has shown this can have detrimental effects on the calves in terms of health and development, but the effects on carcass traits were less clear.

The researchers also maintained a control group that was not restricted in diet at any point. This gave them four different groups to evaluate potential differences that may occur as a result of timing of the dietary restriction.

“The various groups were kept on their diets until they calved. They had no diet restrictions beyond that point; they were managed and fed as one group, as in a typical range-based production setting,” Kincheloe explains.

“A subset of calves from each treatment group was selected for evaluation of gene expression. We took a biopsy sample from their longissimus muscle, and used RNA sequencing to look at genes that may be up- or down-regulated across the entire bovine genome as a result of the dam’s nutritional treatment,” she says.

After weaning, the calves went to the University of Nebraska West Central Research Center at North Platte and were finished on a standard feedlot diet with no nutritional restrictions, using a Grow-Safe system to collect individual feed intakes and calculate feed efficiency.

“Muscle development peaks during midgestation, and the bulk of muscle mass is developed during late gestation,” says Amanda Blair, the SDSU meat scientist who evaluated the carcasses.

“No additional muscle cells are developed after birth, so influences on muscle development during gestation can have lasting impacts. Adipose tissue [fat] development also starts in midgestation and continues through late gestation. Adipose cells, unlike muscle, can continue to develop after birth,” she explains.

“Previous research in our lab evaluated effects of limiting energy in the diets of pregnant cows, so to complement that work we focused on the influence of metabolizable protein on offspring growth and development.” Protein is important, and often supplemented in cows’ winter diets.

“Although we are not yet ready to give recommendations to producers, from a meat science perspective we are encouraged by our results. Muscle biopsies we collected at birth, and again just before harvest of calves on the protein restriction study, were intriguing. These biopsies gave us a snapshot of what the gene expression profile looks like at these two time points — to see if we were changing the expression of genes relating to muscle and fat development,” says Blair.

For example, using at-birth muscle samples, researchers found that offspring born to dams that were restricted actually had an increased expression of genes that regulate development of fat, and a down-regulation of genes involved in muscle development.

“Ultimately, in the carcass, we didn’t see this expressed in more fat or less muscle, but it lets us know that the dietary treatments impacted genes regulating development, and perhaps could influence those tissues in other management systems,” Blair explains.

This is an exciting new area of research that might eventually help producers understand more about how to manage pregnant cattle to produce offspring with optimum carcasses. “We’d like to eventually know how we can best feed gestating cows to optimize fetal development, and ultimately the phenotype of offspring,” Blair says.

“We also want to manage that in a way that makes sense economically for producers. It’s important to realize that what we do during gestation can have a long-term impact on the offspring,” she explains.

“In looking at the literature regarding development of muscle and fat tissue, we were predicting that the restricted calves would have less muscling and more fat,” says Kincheloe. “If muscling was affected by protein restriction, those cells would likely be committed to adipose development. However, the only difference we saw in carcass composition was slightly increased rib-eye area in the progeny from dams that were restricted in late gestation,” she says.

This response was not statistically different among groups when hot carcass weight was included in the analysis; however, it indicated the response was primarily a function of body weight. SDSU Extension beef specialist Ken Olson says the differences were too small to be meaningful. “Thus, we didn’t see any reason to change the way we recommend feeding cows. We want to maintain their body condition through winter,” he says.

“In contrast to the lack of differences we saw for the finishing period and for carcass characteristics, the gene expression differences were highly significant among the groups — in terms of when the protein restriction was applied, and also for the duration of the restriction,” says Kincheloe.

“We can’t say with certainty that calves from restricted dams will be born with these genes up-regulated and will stay that way through life. Although gene expression differences were interesting, a producer’s bottom line is based on what actually happens with the carcass, and how it grades and what profit it might return,” she says.

We still have much to learn about how each gene functions in the entire bovine genome. “Some of the more common genes have been identified regarding the role they play in various pathways influencing metabolism and tissue development, but there could be many others [not identified yet] that may have been affected by our treatments in this study,” she explains.

Smith Thomas is a rancher who writes from Salmon, Idaho.