Get a Newborn Calf to Breathe

There are traditional practices and old wives tales about how to get a newborn calf to breathe. Some are valid, and some are not. 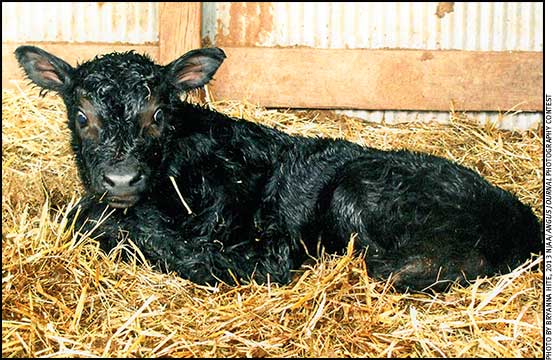 Cody Creelman, veterinarian with Veterinary Ag-Health Services, a five-veterinarian beef cattle practice at Airdrie, Alta., Canada, says a few traditional practices to get newborn calves to breathe are actually harmful, even though they were recommended by veterinarians in earlier times. For instance, stockmen traditionally held the calf up by the hind legs to theoretically allow fluid to drain from the airways. Likewise, swinging the calf was supposed to help clear the airways.

“This is no longer standard practice. You’ll see fluid coming from the calf’s mouth and nose, but it’s been proven that this is fluid from the stomach. Hanging upside down or swinging actually makes it harder for the calf to breathe because of all the weight of the gut putting pressure on the lungs,” says Creelman.

He advises putting the newborn calf in recovery position — upright, rather than lying flat, resting on the sternum (breastbone), with head and neck extended forward. This allows maximum oxygenation in the lungs because they can both fully expand. When the calf is lying on its side, the bottom lung can’t expand.

“If the calf is upright, there is a better ratio of oxygenation and blood flow, and extending the head forward allows for an open airway,” he explains. This position also allows some of the fluid and mucus from the nostrils to drain out.

If the calf is conscious but not breathing, you can try to stimulate it to start breathing by tickling the inside of the nostril with a clean piece of hay or straw. This often makes the calf cough and take a breath. This practice is not harmful and can be helpful.

“Even better, however, is the Jen Chung (GV-26) acupuncture technique. There is an acupuncture/acupressure spot on the tip of the nose. If this is pressed or poked, it stimulates the central nervous system, increasing heart rate and respiration rate and overall consciousness. We teach ranchers to use a very small diameter needle, like 20 gauge, and poke right into the center of the tip of the nose, and give it a little twist. This works to stimulate breathing,” he says.

If you don’t have a needle handy, press that spot with your fingernail, he suggests.

Another technique some producers use is cold water, he adds. If the calf is limp and not breathing, they splash a bucket of cold water over the calf’s head to stimulate the calf to shake its head and get it breathing. It’s like jumping into a cold lake; you gasp. It stimulates natural reflexes to take a breath.

If a calf has been short of oxygen and is unconscious and won’t start breathing, it may be necessary to give artificial respiration. The calf should be on its side, with head and neck stretched forward to open the airway, so the air will go into the windpipe and not the esophagus. Then blow into one nostril, holding the other nostril and the calf’s mouth shut.

“Apply light pressure (with your free hand) to the esophagus, just below the larynx — a little higher than mid-neck. This will help close off the esophagus, to ensure you are not just filling the stomach with air. Don’t push so hard that you close off the trachea, too, because it is soft cartilage,” says Creelman.

“In most cases, the heart is still beating, but the calf is just unconscious and not breathing. Very rarely will you be able to save a calf if the heart has stopped.” Even if the calf is limp, blue and looks dead, if there is a heartbeat you may be able to revive it.