This column has periodically reviewed total feedyard revenue over the years. Estimation of the measure provides an indicator of total dollars entering the production sector; thus, it’s a measure of funds that potentially make their way upstream to backgrounders, stockers and cow-calf operations.

Accordingly, the revenue trend is important to assess over time. More revenue coming into the feedyard generally means more dollars available to the production sector. If the trend is positive, there are new opportunities for growth and expansion. Conversely, if the trend is negative, the opposite is true.

Related: Industry At A Glance: Feedyard Revenue Through 2013

It should be noted that the revenue estimate is not an indicator of profitability and shouldn’t be interpreted as such. The calculation is straightforward and a function of three key components:

This week’s illustration highlights feedyard revenue trends; first vs. second half of the year along with annual total. The breakout provides meaningful comparison on an ongoing basis. 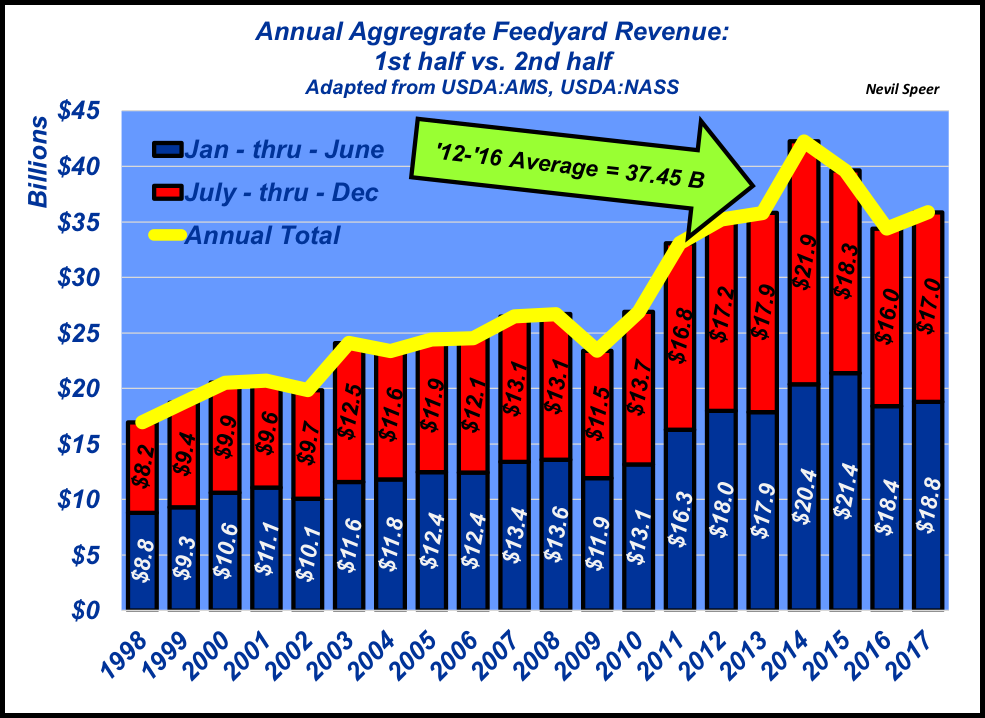 Last year’s total saw improvement versus 2016 — $35.8 billion vs. $34.4 billion, respectively – most of that coming in the second half. And while 2017 generated more revenue versus the prior year, the total is still off the five-year average of $37.45 billion. All that said, it appears that 2018 is setting up for a favorable year – following through on the second half of 2017, bigger production and better prices could provide a boost for the beef industry’s top line.

How do you foresee the market playing out in 2018? Is it possible to get revenue totals back toward the five-year average? Do you perceive new opportunities because of what occurred in 2017? Leave your thoughts in the comments section below.