I know I’ve shared this story before, but considering the weather we experienced across much of Ohio the first half of summer, it’s appropriate to tell it again. Dad was a mechanic for a local farm implement dealer. Once while out on a combine service call in mid summer he asked the farmer if he’d gotten all his hay made. The response – in a deep German accent – was, “Yes, it got made . . . but it rained so much I never got it baled.”

Despite that being the case in many parts again this year, and then followed by a very dry late summer, the fact is that we still have an abundance of feedstuffs available that will maintain beef cows cost effectively if managed and supplemented properly. Over the years we’ve spent a lot of time in this publication discussing the planting of small grains and annual forages in late summer and fall for supplemental forage. With over 400,000 acres of wheat harvested in Ohio this year, the opportunities were huge for producing additional forages on those acres. 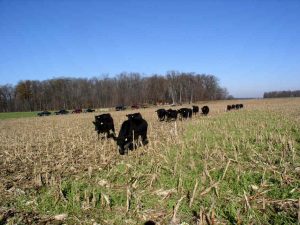 Strip or manage grazing allows for more efficient use of corn residue, especially if an annual such as oats were flown onto the field prior to harvest.

Today, let’s discuss a couple more of the opportunities that remain. With Ohio farmers in the midst of harvesting more than 3 million acres of corn, the potential for the brood cow feed supply being extended well into fall by utilizing crop residue is huge. Corn crop residue is practical for feeding dry, gestating beef cows in mid gestation providing they have average or better body condition. Managed correctly, one acre of corn residue can yield up to 60 animal unit grazing days (60 days of grazing for a 1000 pound animal). It’s also the perfect crop to utilize while stockpiling perennial forages throughout the fall.

Grazing “efficiency” will determine exactly how much feed is realized from corn residue. Moveable electric fencing can increase utilization up to 50% by allowing cattlemen to control the amount of area grazed thus, preventing the cattle from “selective” grazing or “trampling” many of the leaves or husks. “Strip” grazing the cows will also reduce the potential for acidosis in situations where there may have been excessive field losses of grain. Simply “dumping” the cows onto the entire corn field will be least efficient but will allow more residue to remain on the field over the winter for cover. Cattle will select and eat the grain first, then the husk and leaves, and finally the cobs and stalks.

Fields containing corn residues should be grazed soon after harvest for optimum quality, and fields with poor drainage or compaction concerns should not be grazed over extended periods of time. Producers with a Conservation Plan should check with NRCS to be certain that the grazing of corn stalks does not violate the Plan.

If corn stalk fields are not presently fenced, temporary electric fencing is an economical alternative. Depending on the size and layout of the field, harvested corn fields can be encircled with a single strand of poly or high tensile wire supported with fiberglass posts for perhaps $10+/- per acre. Even if a fence charger must be purchased to allow the grazing of corn residue, up to 45 days per acre of feed may be provided a typical Ohio brood cow at a cost of under 25 cents/head per day. And, of course, the materials purchased to provide this temporary boundary may be reused from year to year, thus, making the “annual” cost of ownership even less. 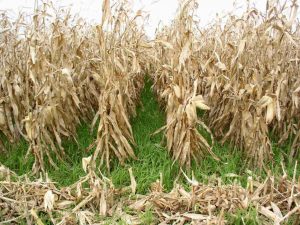 During a fall with adequate precipitation, oats or cereal rye flown onto standing corn can enhance the overall nutrient value of what’s grazed after corn harvest.

While corn residue offers a considerable amount of digestible energy and fiber, it’s always good to review the palatability and practicality of utilizing the crop residues that result from either corn or soybean harvest as a significant feed source, especially if they must be mechanically harvested and transported for feeding.

Despite the fact that Ohio will harvest over 5 million acres of soybeans this fall, of the two residues, certainly soybean stubble bales must be viewed as a last resort unless you have a bale processor and feed it in limited quantities to “dilute” other high quality feeds in the ration. In fact, if the vision for utilizing soybean residue is simply placing bales of the “feed” in bale feeders, it’s probably not worth the time, fuel, wear on the machinery, and effort it takes to gather it. While it can have 35-40% TDN and nearly 4% protein, this is less than even wheat straw (review an earlier article linked here by Steve Boyles on feeding straw). Simply put, as soybeans increase in maturity they increase in lignin and lignin is not digested well in the rumen. Soybean stubble might make marginal bedding, but twigs gathered from the trees in the yard could make a comparable feed.

While corn residue has much more merit than soybean residue as a feed source and may be viewed as comparable to average grass hay, palatability of the stalks can be a problem. When it comes to baling and transporting corn residues, consumption versus waste becomes a consideration worth pondering. The husk, leaf, and any kernels in the bales will likely make up less than one third of each bale, but as suggested earlier will be readily consumed. If a bale processor is used, that might allow many of the stalks to be more palatable. However, when simply placing corn residue bales in bale rings, the abundance of corn stalks that will remain after the more desirable parts of the bale are consumed will likely become bedding. If you must feed baled corn residue in bale rings, consider simply pushing the chopper or spreader on the back of the combine forward and dropping the residue that comes through the thresher in a “windrow” and then bale only those windrows. The resulting bales will be a much higher percentage of the palatable portions of the corn residue.

As one considers baling and transporting baled corn residue to brood cows, carefully consider the harvest and transportation costs involved on a “per consumable and digestible ton of dry matter” basis. Keep in mind that a bale of crop residue seldom weighs the same as the same size bale of hay. In many cases, simply feeding shelled corn may be more cost effective. Also, as one carefully considers the economics of harvesting and hauling corn residues, keep in mind the fertilizer nutrient value being removed from the corn field and possibly left in a pile at the bottom of a bale ring. According to past OSU Extension fertility specialist Robert Mullen, when you remove a ton of corn crop residue from a field you’re taking with it 6 pounds of P2O5 and 25 pounds of K2O which should be replaced or redistributed to the field. Soybean residue would remove only slightly less.

Grazing corn crop residue can prove to be a valuable feed and soil friendly. However, carefully consider the pros and cons of mechanically harvesting and transporting the residue to the cow herd. I think you’ll find the bottom line is pretty simple . . . managed grazing is by far the best way to utilize corn residue, and if you’re looking for feed, soybean stubble probably isn’t worth the effort or expense it takes to harvest or transport it.