Rick Stansbury, head basketball coach at Western Kentucky University, has a saying about his players: they need to be able to “add to.” That is, a player must “add to” in some form or fashion to earn the opportunity to play.

The expression has different connotations for every player – depending on their role. Of course, the opposite is NOT adding to—or stated another way, taking away. For players coming off the bench, it means avoiding fouls and turnovers while providing some rest for the starters without costing your team. That’s an important “add to” toward winning games.

That is an appropriate way to describe market action in February. Depending on your focus, there’ll be different interpretations around the “add to” factor. While there wasn’t any major price movement one direction or another, the month seemingly served as an “add to” for the market’s general direction as we transition into the spring market.

As a quick recap, fed cattle trade started the month around $126 per cwt. Steer value then surged a couple of weeks later, touching $130. Prices subsequently softened $3 during the final two weeks of trade, finishing the month at $127.

On a positive note, it was wholesale trade that managed to prop up feedyard receipts. The Choice cutout finished the final week of February (into March) averaging $221 per cwt – $15 better versus last year (Figure 1). That occurred on production throughput nearly 4% larger compared to 2017; 492 vs 475 million pounds, respectively.

As such, it appears that beef demand remains robust and beef continues to hold some pricing power in the marketplace. That reality is critical if the market is going to fight off bearish supply pressure heading into spring.

That supply pressure is formidable. Cattle feeders continued their aggressive purchasing behavior by placing 2.07 million head in January—4% bigger than 2017 and 10% more versus the five-year average. That’s not a new phenomenon. Rather, January represents the 11th consecutive month with larger year-over-year placements. Meanwhile, the six-month placement total through January adds to 12.44 million head—the largest cumulative pace in five years (Figure 2). 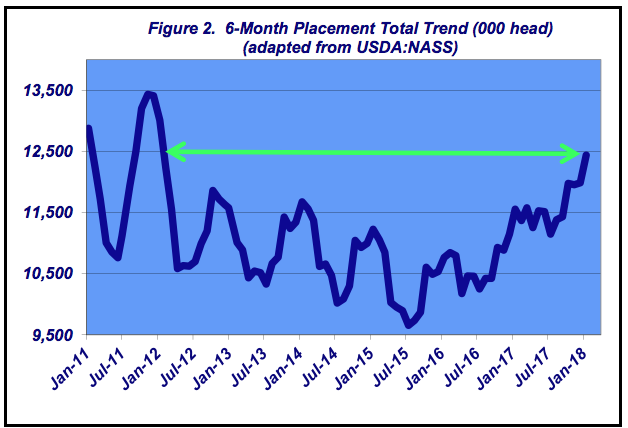 All that aside, clearly the largest news in recent weeks revolves around President Trump’s declaration that the administration intends to impose new tariffs on imported steel and aluminum. At press time, the outcome was still undecided. For the beef industry, what’s important here is that a significant portion of steel imports are derived not from China (at least directly) but rather from Canada and Mexico (Figure 3). As this was being written, there was talk of excluding Canada and Mexico from the tariffs. 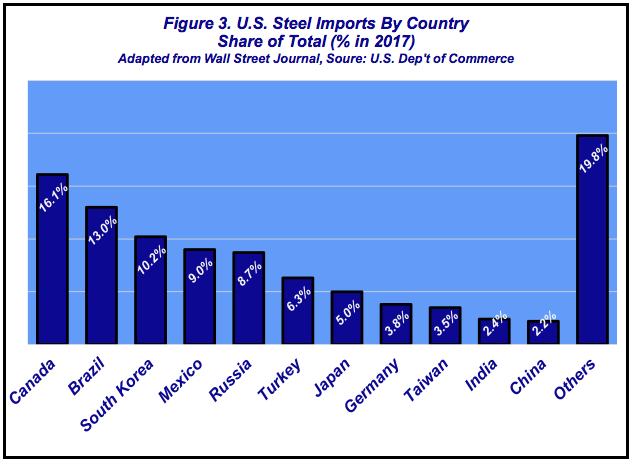 That’s an especially significant consideration if they aren’t excluded and steel tariffs result in retaliation—a likely outcome. If that occurs, the beef industry could be significantly impacted by such action. Beef exports to Canada and Mexico, combined, represent approximately 25% of total beef exports (Figure 4). The value of those NAFTA exports are equivalent to roughly $75 per head. 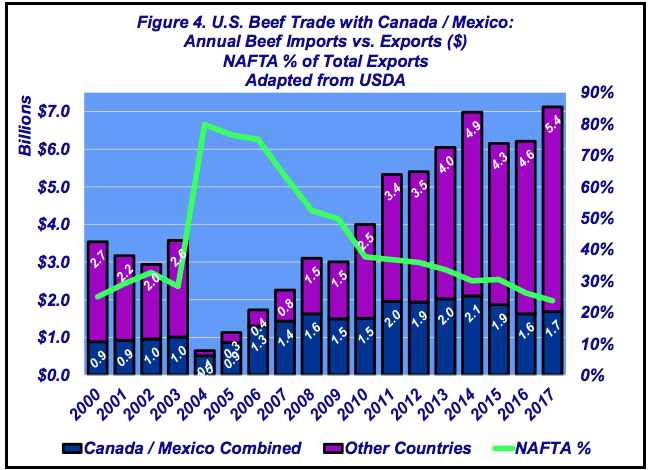 Moreover, any disruption in international trade could be especially damaging considering the large placements discussed previously. Large spring cattle supply is further confounded by simultaneous large supplies coming from both the pork and poultry industry. As noted in an earlier Industry At A Glance:

2017 resulted in per capita meat supplies (including turkey) around 215 pounds. That’s sharply higher versus just three years ago. Meanwhile, production is targeted to rise further in the next few years—putting us back near the 220 pound mark established in the mid-2000s.

All that said, international trade is always somewhat of a prickly issue. However, Don Boudreaux (Globalization, c. 2007) points out that: “Most anti-globalists want two inconsistent things. They want immunity from the forces of economic change and they want the goods and services that market capitalism makes possible. They cannot have both.”

Accordingly, lest we lose sight of mutually-derived benefits associated with market capitalism, assigning tariffs is risky business, rarely turns out well and needs to be evaluated very carefully—especially when considering potential for unintended consequences.

This column always focuses on risk. The tariff announcement and ensuing discussion highlight the always-present possibility of external shocks to the market. It’s impossible to anticipate everything that comes our way—particularly when thinking around external events.

With that in mind, producers are always encouraged to be aggressive about obtaining and analyzing meaningful information. Doing so helps ensure developing proper planning for such events, prevents against being too reactive, and increase probability of making successful business decisions going forward. Stay posted!