In the United States, more than 17 million bulls are castrated yearly that range in age from 1 day to 1 year-old. Tetanus (Clostridium tetani infection) is a potentially life-threatening neurologic disease affecting all species of domestic livestock, including cattle. The clinical signs of tetanus are subtle and often missed until the disease is advanced. At that point, treatment and management of the affected animal is very difficult and the chance for recovery is poor. Recognition of the initial signs of stiff legs, an anxious expression with ears held back toward the poll, moderate bloat, erect tail, and th 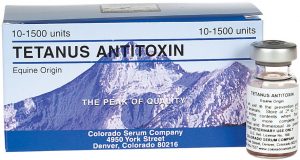 e unusual “flick” of the third eyelid across the eye leads to an accurate early diagnosis and allows treatment to begin when it is most effective. Any calf castrated with an elastrator band should be given tetanus prevention in the form of either tetanus toxoid (two doses required with the 2nd given two weeks prior to castration), tetanus antitoxin (given the day of banding) or, in some cases, both are used concurrently or sequentially. Calves banded early in life are less likely to develop tetanus because the testicles are much smaller and the scrotal sac generally falls off much more quickly than heavier calves so the tetanus organism does not have time to grow. Additionally, with early castration by any method, the risk of infection is much lower, the risk of injury to the person performing the castration is lower, and the procedure is relatively quick and easy. 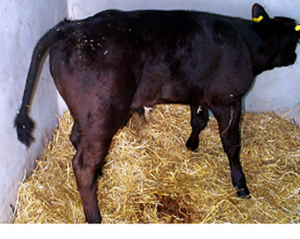 Figure 1: “Pump-handle tail” in a case of tetanus. From http://www.nadis.org.uk/bulletins/clostridial-disease-in-cattle.aspx

Tetanus is caused by toxins produced by the gram-positive bacteria Clostridium tetani. It is found in soil but may also be present in the feces of domestic animals, especially horses. In the presence of oxygen, C. tetani produces “spores” that basically protect the bacteria with a hard outer layer and allow its survival in soil for years. These spores are resistant to many disinfectants and can even survive steam heat at 212°F for 20 minutes. If an open wound is contaminated with soil or feces, the spores of C. tetani will enter the site and germinate in environments where there is dead or rotten tissue and no oxygen (such as the scrotum after banding). This results in rapid growth and production of tetanus neurotoxin (TeNT) responsible for causing the clinical disease of tetanus or “lockjaw”. The toxin binds irreversibly to the nerve endings and travels back to the spinal cord, causing spastic paralysis. The most common infection sites in cattle for C. tetani include deep wounds with dead tissue, infected areas of the vulva or vagina following difficult birth, and severe infections in the uterus. Management practices that may create environments perfect for germination of C. tetani spores include dehorning, elastrator band castration, nose ring placement, tail docking, and ear tag placement. The incubation period, or time from injury to development of first signs, averages seven to ten days but can be much longer. The first detectable clinical signs of tetanus in cattle are usually generalized leg stiffness and reluctance to move. Signs of tetanus vary and may be mild to severe when the animal is found. As the disease progresses, a stiff, stilted walk develops and the calf resembles a sawhorse when standing still due to muscle rigidity. A “pump-handle tail” is often noticed where the animal’s tail is stiff and raised away from the body because of the rigid muscles along the lower spine. An affected calf may have the head extended, nostrils flared, the ears standing up and pulled back towards the poll, and eyelids held widely open so much of the white (sclera) is showing. Most producers will describe a “strange-looking eye blink” which is actually prolapse of the nictitans (“flick” of the third eyelid). This is caused by spasm of the muscles pulling the eyeball inward and allowing the third eyelid to passively move across the eye. The chewing muscles of the jaw may be involved to the point that opening the mouth is very difficult (“lockjaw”). Affected cattle usually lose the ability to eat and drink, resulting in progressive weakness and dehydration. Rumen contractions become weak or disappear and cattle frequently bloat because they lose the ability to eructate (burp off) gas. Subtle muscle tremors may be seen early, but are much more obvious in later stages of disease. Convulsions may be triggered by loud noises or handling of the animal or may occur spontaneously. Affected animals finally become recumbent (down on their side) and unable to rise due to stiffness of the hind legs and the inability to pull their legs underneath them. If left untreated, severe dehydration develops and death may result from exhaustion and respiratory failure or from bloat. The case history and distinctive clinical signs of tetanus found on a routine physical examination are usually enough to make a diagnosis as there are no reliable tests to confirm the disease.

Basic principles for medical management of tetanus cases in cattle are to provide muscle relaxation, neutralize the circulating unbound TeNT toxin, begin establishment of active immunity, eliminate the C. tetani infection with antibiotics, maintain hydration and nutritional status, and provide good footing with deep bedding. Tranquilization by a veterinarian with sedatives such as acepromazine in the muscle will allow some muscle relaxation and help to control excessive sensitivity to stimuli, allowing easier treatment. Tetanus antitoxin, available over-the-counter and on the Internet, may catch and inactivate any circulating toxin but cannot undo the effects of toxin already bound to nerve receptors. The dose for tetanus antitoxin has a wide range from 1,500-100,000 units per animal but generally 15,000 units administered under the skin is recommended for initial therapy. To initiate active antitoxic immunity, a dose of tetanus toxoid should also be delivered in the muscle. Once the wound or infection site is identified, then it must be thoroughly cleaned to remove all dead tissue and should be flushed with hydrogen peroxide to reduce toxin production by any remaining actively growing bacteria. In a recently banded calf showing signs of tetanus, the scrotal sac should be removed and the area cleaned and flushed with peroxide. Antibiotics, primarily penicillin, is recommended at high doses in the muscle for at least 7 days. Good nursing care is very important to survival of tetanus patients. The animal should be placed in a stall with deep bedding to prevent “bedsores” and good footing to help them stand. The animal’s hydration status should be monitored closely and intravenous fluids may be needed if unable to drink. Downer cattle should be set up in a sternal position if possible to prevent bloat. If the patient develops free gas bloat requiring stomach tubing, then a rumen trocar should be placed to relieve gas buildup until the patient regains the ability to eructate. The opening provided by the trocar can also provide a portal for the delivery of water and feed to the rumen. 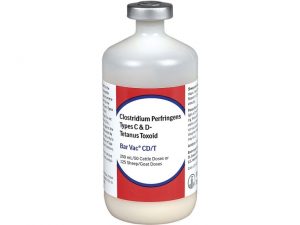 The mortality or death rate may reach 50% in cattle, but animals that survive longer than seven days have a fair-to-good chance of complete recovery. Mild cases usually respond to treatment within one week, but it is important to realize that many patients may improve then develop unforeseen complications that result in death or the need for euthanasia. Regaining the ability to drink is one of the most encouraging signs of recovery. Cattle that end up down on their side with straight, stiff legs usually require euthanasia.

Prevention involves reducing the risk of cattle developing deep wounds or areas of dead, rotten tissue where C. tetani spores may germinate along with the use of vaccines in animals at risk for infection. Elective procedures that could lead to open wounds include dehorning, elastrator band castration, nose ring placement, tail docking, and ear tag placement. It is important for veterinarians and producers to maintain clean conditions and disinfected instruments for each of these procedures. Cattle are not routinely vaccinated against tetanus, and most 7- or 8-way Clostridial (blackleg) vaccines do not contain specific protection against C. tetani although some do (for example, Covexin 8® and Calvary 9®-Merck) contain a tetanus toxoid. Cattle can be vaccinated easily and inexpensively with tetanus toxoid and protective antibody levels should develop in two weeks following the booster injection (2nd shot) of the series. Tetanus antitoxin is recommended for immediate, emergency treatment of exposed or at risk animals when clinical tetanus is suspected or could develop but protection only lasts 10-14 days. Elastrator band castration of heavier, older calves often results in the scrotal sac remaining attached for extended periods of time (> 10 days), creating the right environment for C. tetani spores to germinate. In those cases, both a toxoid and antitoxin should be given at the time of castration if no previous tetanus toxoid series was given prior to banding. 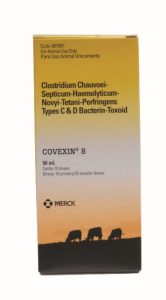 Castration is considered to be a necessary management practice for cattle. Work with a local veterinarian to establish the optimal herd health program for your farm and institute an early castration program to minimize the pain, stress and complications that go along with this procedure. If castration is delayed until the calves get older and heavier, these calves are at much higher risk for development of tetanus and are twice as likely to get respiratory disease as steers on arrival in a feedlot or backgrounding operation.