Dewormers – Are They An Extremely Valuable Non-Renewable Resources?

A “non-renewable” resource is a resource with economic value that cannot be readily replaced on a level equal to its consumption. Petroleum and coal are two familiar examples of valuable non-renewable products used daily but known to exist in limited supply, and formation of new product takes billions of years. Dewormers, on the other hand, are products that can be purchased from almost any farm or veterinary supply store and online. There are many different kinds, fairly inexpensive, and seemingly effective at killing parasites in the digestive tract of cattle and certain types also control flies, ticks and lice. They come in many forms and can be delivered to cattle by mouth as a liquid, paste or in block form, by injection, or simply by pouring it down the topline. Given this situation, how could dewormers ever be classified as “extremely valuable non-renewable resources”? In a recent veterinary continuing education meeting at the UKVDL, Dr. Ray Kaplan, an internationally-known veterinary parasitologist from the University of Georgia, used that very phrase to describe the dewormers used every day in cattle operations.

Dr. Kaplan is considered a leading expert on the rapidly developing problem of “anthelmintic resistance” which means the dewormers available are losing their effectiveness in the field with no new products on the horizon to take their place. He explained that although new drug “classes” entered the market every decade from the 1950s to the 1980s, it has now been over 30 years since ivermectin was introduced in 1981. Basically ‘we have what we have’ which is 3 major chemical classes or families of dewormers known as the Benzimidazoles (SafeGuard®/Valbazen®/Synanthic®), the Macrocyclic Lactones (Ivomec®/ Cydectin®/ Eprinex® & LongRange®/Dectomax®) and the Imidazothiazoles/ Tetrahydropyrimidines (Rumatel®/ Strongid®/ Prohibit® or Levasol®). “Resistance” is the term used for the ability of a parasite to survive after treatment with a dewormer given at the right dose, at the right time and in the right species. What was once a sheep and goat problem is now a growing cattle concern. The first case in US cattle was reported in 2004 and serious problems are now recognized worldwide. Resistance is most common in Cooperia, but increasingly reported in Haemonchus, Ostertagia and Oesophagostomum. Resistance to chemical dewormers is caused by a slow buildup of “resistance genes” in parasites from repeated drug treatment over many years. These genes accumulate undetected over time until the point when so many resistant worms survive there is an obvious treatment failure. Resistant worms are not more aggressive or deadly but they simply survive in high numbers after deworming, causing disease. So why, if livestock has been raised for hundreds of years and dewormers have only been around for the last 50 of those, are such dramatic effects seen if drugs fail? Unfortunately, this reliance on chemical deworming has allowed selection of bulls and replacement females with high production numbers but ignored their genetic inability to resist parasite issues. As Dr. Kaplan explained, we have developed “wimpy” animals when it comes to fighting parasites. Additionally, chemical deworming has allowed neglect of husbandry and pasture management factors that keep worm burdens naturally low. For example, overstocking a pasture means more feces, more worm eggs and larvae after egg hatching, shorter grass and more parasites in animals. This is a management problem and not the fault of the animal or the dewormer.

Parasites are a normal part of the ecosystem and it is also normal for grazing animals to be infected with parasites. “Infection” in this sense means there are worms in the digestive tract and is not the same thing as “disease”. In cattle, “clinical disease” from parasites includes signs of diarrhea, anorexia (“off feed”), rough hair coat and, depending on the parasites involved, anemia (low number of red blood cells) and hypoproteinemia (low blood protein). However, the bigger concern is often “subclinical disease” where there are no overt signs of a problem yet there is actually decreased intake and decreased nutrient utilization resulting in severe reductions in weight gain. Most animals develop good protective immunity from parasites but this can only happen if the immune system gets stimulated by worms inside the animal (similar to how a vaccine works). Development of immunity to parasites largely depends on age of the animal. Calves under a year of age have poor immunity so clinical disease is possible and production losses are certain from Cooperia and Ostertagia without proper control. Two-year olds have moderate immunity so clinical disease is less of a problem but production losses likely without good control as more Ostertagia (the brown stomach worm) are active in this age group. Three-year olds and above have good immunity with little clinical disease and only slight production losses from parasites. This immunity can be maintained throughout their productive lifespan as long as nutrition is satisfactory. Those without good immunity formed early in life are at higher risk for disease. “Premunition” is the term used for this immunity that is stimulated by a resident population of worms and actually restricts the establishment of new worms. Treatment too often in young animals removes worms and eliminates the state of premunition.

How is it possible to know if dewormer resistance is a problem in a herd? The best way to test is a Fecal Egg Count Reduction Test (FECRT) based on the premise that dead worms don’t lay eggs. Fecal samples are taken from 20 animals before deworming then the same 20 are re-sampled in 2-3 weeks (depending on which dewormer was used). The number of parasite eggs should be reduced by >95% between pre- and post- treatment samples. If <90% reduction, resistance to that family of dewormers is certain. The test is best run in weaned animals under 16 months old and is not as reliable in adult cattle. Once parasites become resistant to a drug family, they never go back to being susceptible. For this reason, it is wise to do a FECRT on any newly purchased/leased breeding stock to avoid contamination of the farm with resistant parasites before allowing them to mix with the rest of the herd.

How can we slow the development of resistance to dewormers? Reducing unnecessary treatment with dewormers, making sure the dewormers used are effective, and strategic culling all contribute to fewer resistant genes in parasites. The following are Dr. Kaplan’s recommendations:

In summary, it is impossible to eradicate parasites and, the harder we try, the faster resistance develops. The goal is not to eradicate parasites but to keep them at a level that does not cause detrimental health effects. Reliance on less chemical control and incorporating strategies based on our knowledge of parasites in the pasture (see box below) will help preserve the effectiveness of current dewormers. Viewed this way, dewormers meet the definition of “extremely valuable non-renewable resources.” 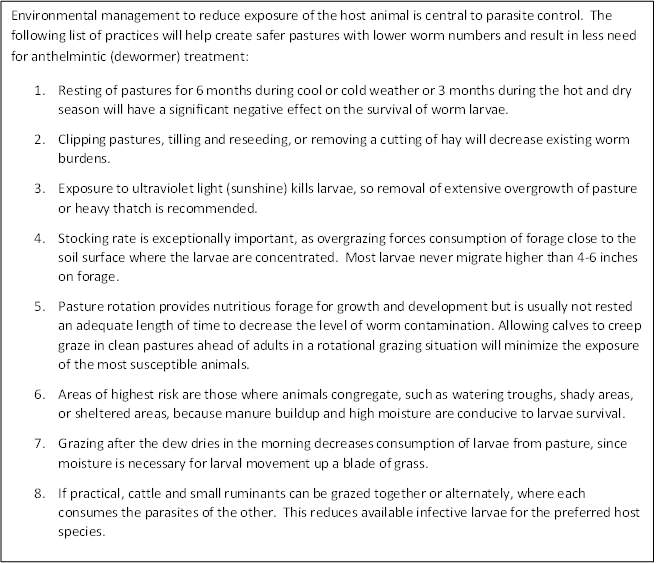