For an increasing number of producers, artificial insemination (AI) and estrus synchronization are tools that help them reach their production goals and allow them to take advantage of genetic choices only available through AI. Reduced risk of calving difficulty from use of high accuracy calving ease sires on replacement heifers is a great advantage to AI users.

Fixed-time AI protocols have allowed producers to eliminate the time and expense of heat detection and still achieve industry-acceptable pregnancy rates to AI. However, information about estrous status at AI may allow producers to target expenditures for AI more effectively. While this may seem hard to understand coming from someone who has spent years talking about fixed-time AI, let me share some research that will explain further.

First, a low cost, accurate method of heat detection is now available in the form of a rub-off, self-adhesive patch that changes color when a female has been ridden several times.

Perry and coworkers reported that visual estrus detection every 3 hours (8 times daily), a marker bull with a penile deviation and a rub-off patch resulted in a similar proportion of females correctly identified in standing heat (92%, 92% and 91%, respectively). Females are considered to have shown heat if 50% or more of the patch is rubbed off. A meta-analysis of 26 studies (10,116 females) indicated a 27% improvement in pregnancy rate of females that had shown heat at the time of fixed-time AI compared to those that had not. Using this information, producers might consider using more elite (expensive) bulls on females that have shown heat at the time of fixed-time AI and a more conservative priced bull for those that have not yet show estrus.

There is an expense to purchase (~$1.20/patch) and apply patches. In the examples given here, the patches are applied during one of the planned handlings for estrus synchronization, therefore only minimal additional time or labor is needed to apply the patches. If we only consider using them as a tool to determine if GnRH is given at fixed-time AI, Table 1 below helps us understand the trade-off in cost of the patch and cost savings in GnRH. To simplify, only one price is used for the heat detection patch and the price of GnRH is varied. The range of estrous response in the table represents what has been reported in current literature. 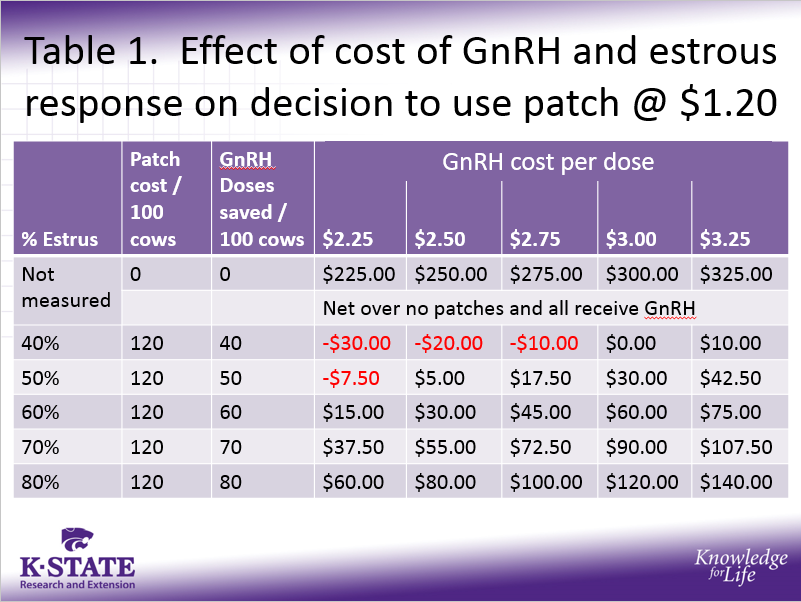 If you want to target AI expenses where they will have the most impact, consider monitoring estrous response prior to fixed-time AI to use higher value semen and no GnRH for females that have shown heat at fixed-time AI. Use proven rub-off patches, applied according to manufacturer’s instructions.