Dangers of Harvesting and Grazing Certain Forages Following a Frost 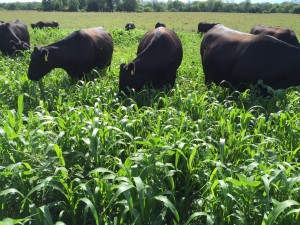 As cold weather approaches, livestock owners who feed forages need to keep in mind certain dangers of feeding forages after frost events. Several forage species can be extremely toxic soon after a frost because they contain compounds called cyanogenic glucosides that are converted quickly to prussic acid (i.e. hydrogen cyanide) in freeze-damaged plant tissues. Some legumes species have an increased risk of causing bloat when grazed after a frost. In this article I discuss each of these risks and precautions we can take to avoid them.

Agronomic species that can contain prussic acid are listed below in decreasing order of potential risk of toxicity after a frost event:

Species not usually planted for agronomic use can also develop toxic levels of prussic acid, including the following:

It is always a good idea to check areas where wild cherry trees grow after a storm and pick up and discard any fallen limbs to prevent animals from grazing on the leaves and twigs.

Plants growing under high nitrogen levels or in soils deficient in phosphorus or potassium will be more likely to have high prussic acid poisoning potential. After frost damage, cyanide levels will likely be higher in fresh forage as compared with silage or hay. This is because cyanide is a gas and dissipates as the forage is wilted and dried for making silage or dry hay.

Young, rapidly growing plants of species that contain cyanogenic glucosides will have the highest levels of prussic acid. After a frost, cyanide is more concentrated in young leaves and tillers than in older leaves or stems. New growth of sorghum species following a non-killing frost is dangerously high in cyanide. Pure stands of indiangrass can have lethal levels of cyanide if they are grazed when the plants are less than 8 inches tall.

Animals can die within minutes if they consume forage with high concentrations of prussic acid. Prussic acid interferes with oxygen transfer in the blood stream of the animal, causing it to die of asphyxiation. Before death, symptoms include excess salivation, difficult breathing, staggering, convulsions, and collapse.

Ruminants are more susceptible to prussic acid poisoning than horses or swine because cud chewing and rumen bacteria help release the cyanide from plant tissue.

The following guidelines will help you avoid danger to your livestock this fall when feeding species with prussic acid poisoning potential:

Green-chopping frost-damaged plants will lower the risk compared with grazing directly, because animals are less likely to selectively graze damaged tissue. Stems in the forage dilute the high prussic acid content that can occur in leaves. However, the forage can still be toxic, so feed greenchop with great caution after a frost. Always feed greenchopped forage of species containing cyanogenic glucosides within a few hours, and don’t leave greenchopped forage in wagons or feedbunks overnight.

Hay and silage are safer

Prussic acid content in the plant decreases dramatically during the hay drying process and the forage should be safe once baled as dry hay. The forage can be mowed anytime after a frost if you are making hay. It is very rare for dry hay to contain toxic levels of prussic acid. However, if the hay was not properly cured and dried before baling, it should be tested for prussic acid content before feeding to livestock.

Forage with prussic acid potential that is stored as silage is generally safe to feed. To be extra cautious, wait 5 to 7 days after a frost before chopping for silage. If the plants appear to be drying down quickly after a killing frost, it is safe to ensile sooner.

Delay feeding silage for 8 weeks after ensiling. If the forage likely contained high levels of cyanide at the time of chopping, hazardous levels of cyanide might remain and the silage should be analyzed before feeding.

Freezing also slows down metabolism in all plants that might result in nitrate accumulation in plants that are still growing, especially grasses like oats and other small grains, millet, and sudangrass. This build-up usually isn’t hazardous to grazing animals, but green chop or hay cut right after a freeze can be more dangerous. When in doubt, send a forage sample to a forage testing lab for nitrate testing before grazing or feeding it.

Species That Can Cause Bloat

Forage legumes such as alfalfa and clovers have an increased risk of bloat when grazed one or two days after a hard frost. The bloat risk is highest when grazing pure legume stands, and least when grazing stands having mostly grass.

The safest management is to wait a few days after a killing frost before grazing pure legume stands – wait until the forage begins to dry from the frost damage. It is also a good idea to make sure animals have some dry hay before being introduced to lush fall pastures that contain significant amounts of legumes. You can also swath your legume-rich pasture ahead of grazing and let animals graze dry hay in the swath. Bloat protectants like poloxalene can be fed as blocks or mixed with grain. While this an expensive supplement, it does work well when animals eat a uniform amount each day.