Colostrum is the Key 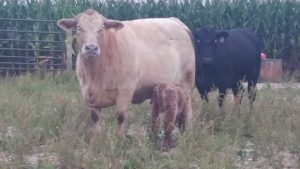 A newborn calf needs to receive adequate levels of colostrum as quickly as possible. Research shows the first 6 – 12 hours are critical.

The winter of 2017-18 has certainly been challenging for beef producers across Ohio and the Midwest. The bitter cold that we experienced through the holiday season into mid-January has given way to milder temperatures and plenty of moisture over the past month. This has resulted in extremely muddy conditions that have made basic feeding and care of cattle difficult at best.

The weather conditions thus far this winter have been tough for producers choosing to start their calving season earlier in the calendar year. Environmental extremes can add to the stress of a newborn calf entering into the world. Fortunately, Mother Nature has equipped the mother of the calf with a gift that helps the newborn to get off to a positive start. This gift is free of charge and commonly known as colostrum.

Colostrum is often described as the “first milk” of the beef female. This is actually a misnomer as colostrum is physiologically much more similar to blood than milk. Colostrum contains very high levels of immunoglobulins (IgG) that helps to prevent infections as well as high levels of fat, energy, vitamins A and D, and white blood cells. It has very profound effect on the health and future performance of any calf.

Under ideal circumstances, a calf will be born unassisted, get to its feet relatively quickly, and it is able to nurse its dam in two hours or less. Unfortunately, this is not always the case due to a variety of factors. Calving difficulties, a weak calf, the cow will not let the calf nurse, a poor udder structure that makes it difficult to for the calf to nurse for the first time, etc. can delay the consumption of colostrum by the calf.

It is very important that newborn calves receive adequate levels of colostrum as quickly as possible. Research has shown that the first 6 – 12 hours is a critical timeframe to make sure the calf receives enough colostrum. The calf should receive 2 quarts of colostrum by six hours of age and an additional two quarts by twelve hours of age. The absorption of antibodies becomes very inefficient by the time the calf is 24 hours old.

If the calf cannot nurse its dam for whatever reason, the producer should supply colostrum directly to the calf. While nursing the dam is the preferred option, the next best option is to attempt to get the calf to nurse a bottle. If the bottle option does not work, then the producer must utilize the tube feeding option.

Consideration should be given to the source of the colostrum. The best option by far is to provide colostrum from the calf’s own mother. If the mother has produced little or no colostrum, the producer should have alternative plans in place to provide a substitute source of colostrum. Fresh colostrum from another cow in your herd is the next best option but finding a cow with extra colostrum that has calved within a few hours of the calf in need will be difficult.

Frozen colostrum from another cow in the herd is another potential source. Colostrum can be frozen and stored up to one year. It must be warmed up slowly to avoid the excessive loss of antibodies. Some producers have secured colostrum from outside herd but use caution with this approach as infectious diseases can be introduced to the calves through unpasteurized product.

Colostrum replacers are good to have on hand in case of emergencies. These powdered mixes typically have 100 -125 grams of IgG per dose. Replacers are typically more expensive than colostrum supplements that have lower levels of antibodies. Supplements should be used in cases when it is questionable whether a calf has consumed a full dose of colostrum.

In times of stress at calving, it is imperative that the new calf gets an appropriate level of colostrum in a timely fashion. A little extra time and effort from the producer can help insure that the calf gets off to a healthy start.