Record beef supplies will require record exports through the end of the decade to keep beef prices near current levels, said Randy Blach, CEO of CattleFax.

Blach and other CattleFax analysts laid out a picture of huge protein supplies, growing-but-slowing exports, a relatively strong economy, along with generally-positive cattle prices through the end of the decade at the firm’s annual outlook seminar at the National Cattlemen’s Beef Association meeting in Phoenix, Arizona, on Thursday morning.

Blach said demand from the global marketplace has been driving this growing protein production and it will be global protein demand that must support it if prices are to remain reasonably good for beef and other animal proteins.

Any “hiccup” could have serious ramifications on beef prices, Blach warned.

However, if things continue along current trajectories, the picture these analysts painted for 2018 is relatively bright, although with prices certainly lower than they were in 2017. Here is a list of their prognostications and the relative price decline from 2017 prices. 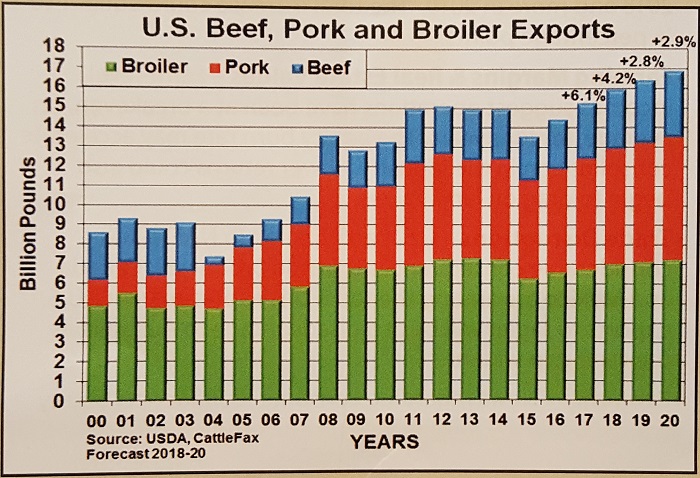 Global meat consumption is helping drive decent prices on beef and other proteins, so any increase or decrease may have a big effect on prices for US-produced beef and its competitors.