Cattle markets finish the year with a strong tailwind

The fed cattle market found itself trading mostly softer to sideways during November. Fed cattle finished October at $123-124 per cwt and the market then incrementally stepped back toward $119 as Thanksgiving approached.

However, the final week of the month saw better trade with sales up $120-121 – just a few dollars off October’s ending mark. Depending on your bent, that action can be interpreted in a couple of different ways.

The skeptic points out the market’s rally during September and October has now stalled out. That view perceives the best that sellers can hope for going into 2018 is a market trading mid-$120s through most of the spring. The bear case is further reinforced by flat to weaker boxed beef sales in recent weeks and big fall placements that require marketing come spring.

However, the bulls have a different take on November’s market action. November rarely provides for strong upside, with the recent exception of last year’s $10 rally through the month. After all, it’s Thanksgiving; the meat market is focused on turkey and ham. Yet there are some bullish indicators out there that provide some legs for this market to run. 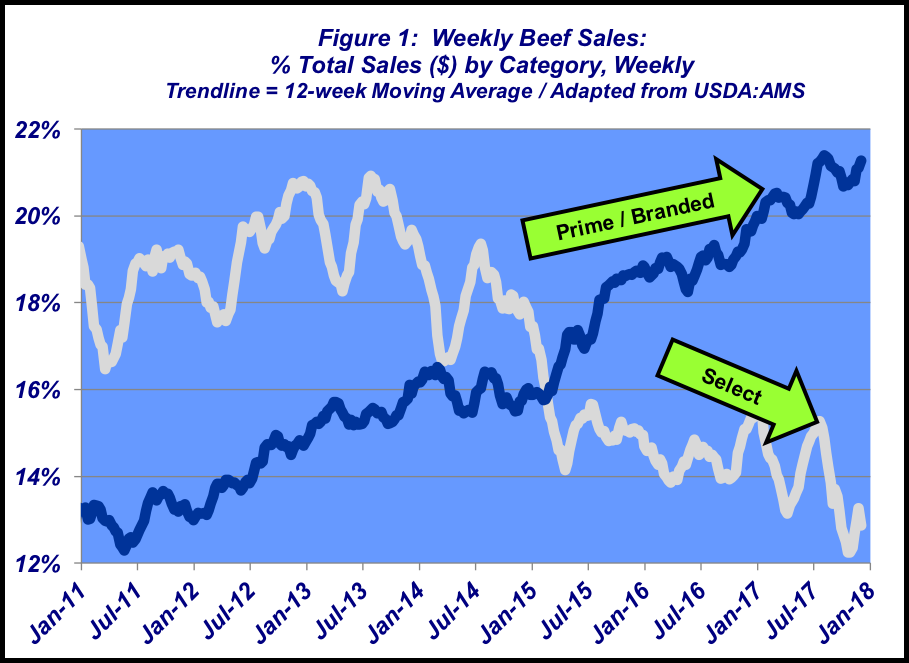 First, the market managed to trade sideways amidst some sizeable kills. In fact, USDA estimates November’s final weekly beef production to total 537 million pounds – the biggest week since 2008 – and 20 million pounds ahead of the same time last year. Meanwhile, amidst bigger volume, the Choice cutout and the fed market are $17 and $7 better, respectively, versus 2016. Something must be going right for the beef complex.

This column has emphasized the impact of bigger supplies throughout 2017 but somehow, some way, beef demand is managing to stay ahead of all that. That scenario is aptly articulated by the Daily Livestock Report (Dec 4):

…all year long we have seen beef demand defy expectations. The economy is in good shape, unemployment is low and the consumer appears willing and able to pay for beef. At this point, futures market participants look to be cutting back some of their bullish bets until they get a better sense as to how demand will play out in January. Last year, the beef cutout came under pressure early in the year, providing an opportunity for retailers and foodservice operators to plan large beef features before Easter and then again for Memorial Day. Steer weights are currently well under year ago levels and the high marketing.

To that end, this column noted last month that, “Everything on the demand side is favorable, and noted previously, the demand bulls have the upper hand – at least for now. However, despite an early pattern that’s similar to last year, that shouldn’t serve as an opening for complacency. As noted above, big supply is also tugging on the rope and creates potential for the market to slip along the way. “

With that in mind, USDA’s November Cattle on Feed report underscores that supply pressure is an enduring concern. October provided yet another month of bigger year-over-year placements. Feedyards received 2.39 million head in October – 10% more than last year and 5% ahead of the five-year average.

With the exception of February, every month during the past 12 has resulted in bigger placements. More importantly, the six-month total is 10% larger than 2016 – all meaning more cattle to market as we transition into spring.

Placements in Nebraska, Iowa and South Dakota were especially large.The three states combined for a new monthly record of 909,000 head – representing 38% of all placements, also a new record. Clearly, cattle feeders in the Corn Belt have intention to market abundant corn supplies through cattle.

Meanwhile, the North Dakota Extension team recently released a long-term assessment of data sourced from the Cow Herd Appraisal Performance Software (CHAPS). The data are telling with respect to long-term cowherd trends. Most notably, cowherd reproduction benchmarks (pregnancy rate, calving rate, weaning rate) have remain unchanged during the past 15 years. As noted in last week’s Industry At A Glance, that’s not surprising – similar trends have been reported by the Kansas Farm Management Association.

Nevertheless, that’s an important accomplishment. That is, these data sets are likely indicative of broader trends in the industry and reveal beef producers have proven successful in maintaining both reproductive and growth performance all the while greatly improving quality within the cattle mix.

The importance of quality to the industry is aptly illustrated in the figure below. The top end of the market (Prime and branded sales) has consistently earned market share over time, now running consistently in excess of 20% market share. All the while, the importance of Select has persistently diminished in recent years; it currently represents roughly just 12% of all sales.

The production sector has collectively responded to consumers and their desire for better, more consistent beef – while also maintaining a strong focus on production. As a result, beef demand and pricing power has improved in recent years. That ultimately places all stakeholders in a better position going into 2018 than we would be otherwise. With that note, here’s wishing everyone the best of prosperity in this Christmas season.