Cattle income something to bawl about

Farm income data recently released by USDA highlights the importance of the cattle industry to our nation’s farm finances.

Even after subtracting all livestock and poultry expenses from cattle and calves’ cash receipts to avoid double-counting — as receipts accrue every time an animal changes hands prior to its final destination — the total is projected to be just shy of $45 billion this year.

While it is a little unfair to charge all purchased livestock and poultry expenses against cattle cash receipts, as other animals may be sold multiple times during the production process besides cattle, USDA does not provide details regarding this expense category; and the vast majority does accrue within the cattle industry. Nonetheless, the accompanying figure shows that cattle receipts have increased their presence within major livestock categories, more than doubling since the late 1990s. 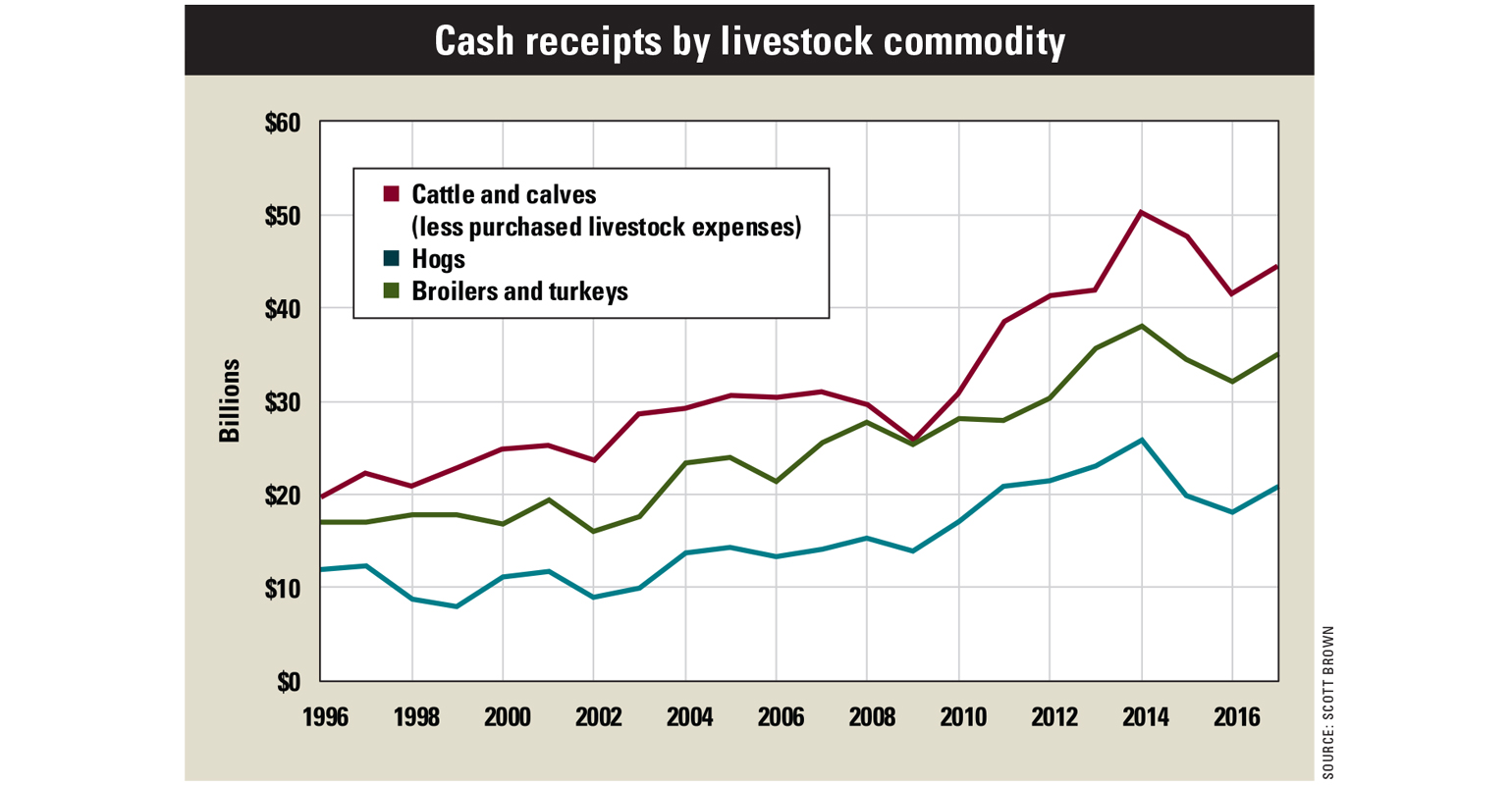 Gaining ground
Cattle receipts have accounted for nearly 30% of total livestock cash receipts in recent years, and currently make up about 13% of all commodity cash receipts.

It is interesting to note that receipts for broilers and turkeys almost surpassed those of cattle during the difficult economic years of 2008 to 2010.

As the economy has improved and consumers have had more disposable income to spend at restaurants and on premium at-home dining experiences, cattle receipts have again widened the gap on other livestock commodities.

Still struggling
Cow-calf producers may glance at the rather modest decline in total cattle cash receipts and wonder how in the world their profitability has fallen by hundreds of dollars per cow in the last couple of years.

A big factor behind the change has to do with recent changes in feedlot profitability. According to the Livestock Marketing Information Center, this year will likely end up as the second-most profitable year for returns to feeding cattle since at least 1989, trailing only 2003. Conversely, feedlot returns in 2015 were at their most negative in at least a generation.

It is also worth mentioning that those receipts are now being shared among a larger number of beef cows. When the herd grows faster than total receipts, the value placed on each animal necessarily declines.

While cash receipts only tell half of the industry profitability story due to the fact that input costs are ignored, and while national accounting measures mask the variability existing among operations, it is a positive thing for all involved in the cattle business to see strength in cash receipts.

While there will be ebbs and flows among each component of the beef industry (including packers and retailers, whose receipts occur later in the marketing chain than those shown here), maximizing the total size of the value pie is important for all. And those making purchasing decisions continue to view cattle as a centerpiece to the U.S. agricultural industry.

Brown is a livestock economist with the University of Missouri. He grew up on a diversified farm in northwest Missouri.