Big supply and heavy carcasses— is there an end in sight?

September proved to be a solid month for cattle feeders. In the midst of supply headwinds, feedyard managers ratcheted prices higher the last half of the month. Sales just prior to and following Labor Day were mostly $104-105 per cwt. The market then began to get a little traction, bumping up to $106 in the middle of the month – and following through with even better prices around $108-109 to close out the final two weeks of the month (Figure 1).

That’s somewhat of a victory considering that wholesale beef prices have been chugging along, weighed down by lots of product for buyers to absorb. Figure 2 highlights the eight-week moving average for beef production. The industry has ramped up throughput to produce better than 500 million pounds per week on a moving average basis. 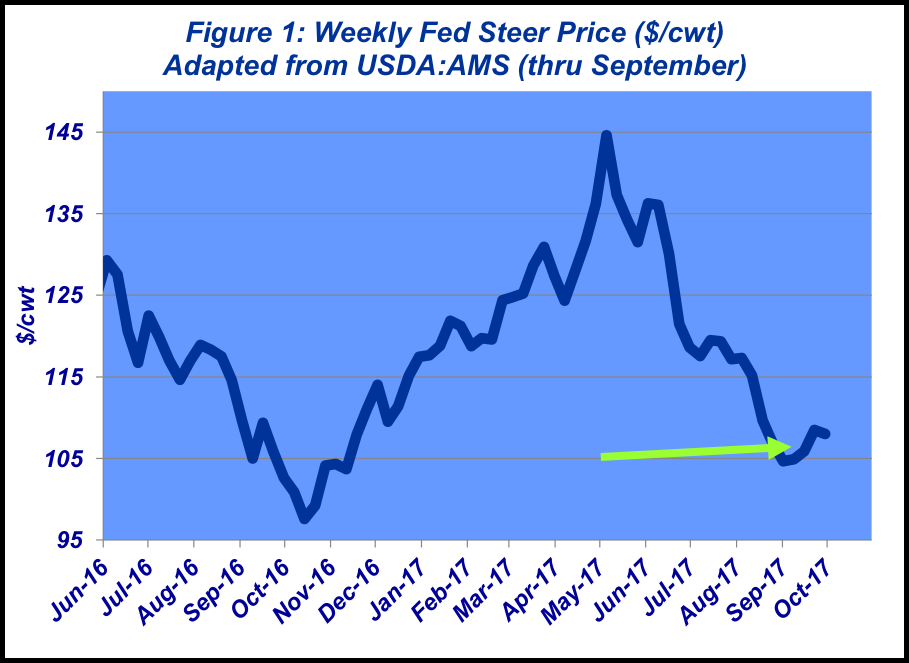 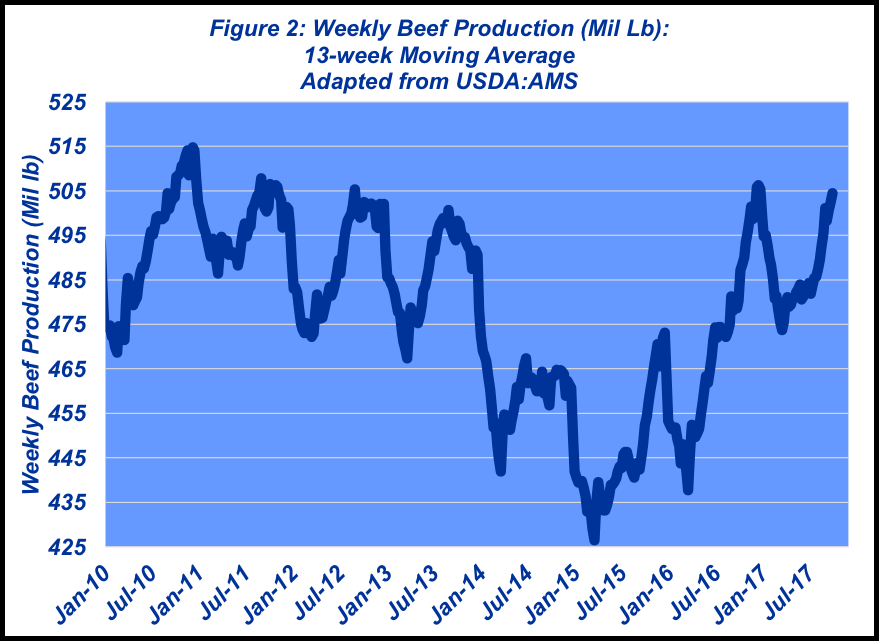 Big supply will remain the theme for the coming months. Placements were very active during the spring and summer and those cattle still need to be marketed. As explained last month:

While July feedyard arrivals were only 43,000 head larger than last year, it was still on the plus side. That comes on the heels of bigger placements in March, April, May and June. In aggregate, March through July placements total 927,000 head more than 2016.

Those now begin to make their way to market. Beginning in August through the end of the year, feedyards need to sell an additional 927,000 head versus last year. That’s roughly equivalent to 185,000 additional head per month – or from a weekly basis, it means fed steer and heifer marketings need to run 45-50,000 head bigger than 2016’s weekly kill. That’ll keep the industry chugging away at a 520,000 (or more) weekly pace for fed steer and heifer harvest through the end of the year.

Meanwhile, the September Cattle on Feed report confirmed that reality. Most notably, placements were up year over year again in August: 1.93 million head versus 1.88 million head in 2016. Therefore, the last six months have seen the feeding sector place 11.4 million head – 976,000 more than the same time frame last year.

There are some concerning signs out there with respect to the placement trend. Despite aggressive marketings and big production, cattle feeders may be getting backed up anyway. Steer carcass weights bottomed in mid-May at 832 pounds; currently, carcass weights are running at 897 pounds – a 65 pound swing in just a little over four months.

Historically, the biggest low to high swing occurred in 2015 – the difference being 66 pounds. And weights typically don’t peak until November. Thus, we will likely see bigger weights yet this year and establish a new annual low to high shift.

The outcome is there are lots of cattle and bigger weights still to come in 2017. And all that against big production from both hogs and poultry – currently running near 540 and 800 million pounds weekly, respectively. Fall production will need to be monitored very carefully.

Moreover, cattle feeders are incentivized to drag their feet along the way, given the deferred premiums at the CME. The October contract is currently trading at a $6 and $9 discount relative to December and February 2018, respectively. 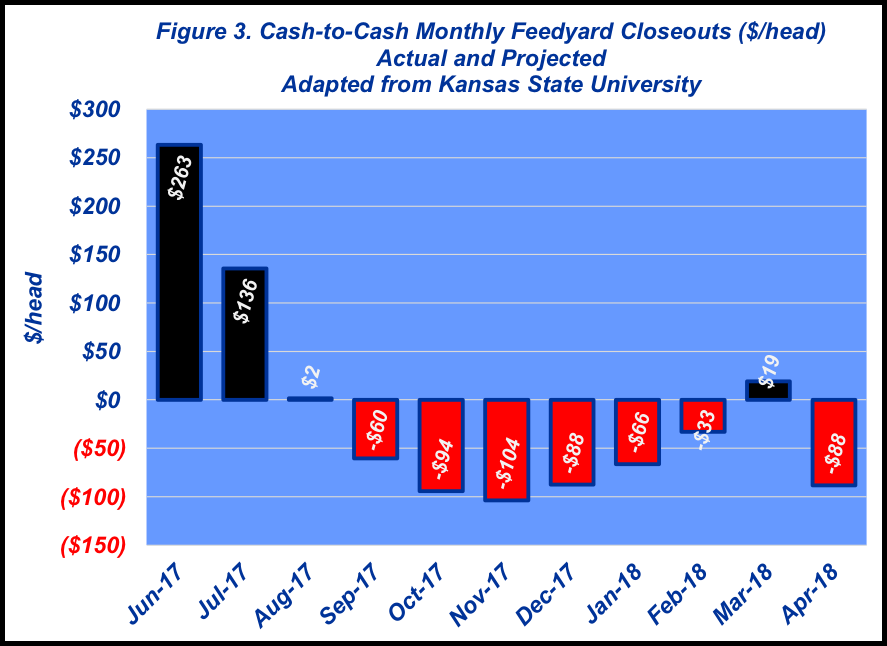 The incentive to feed to heavier weights comes largely on the heels of USDA’s year-end corn carryover estimate of 2.295 billion bushels (Figure 4). Most significant, nearly 800 million bushels are currently being stored on the farm as of September 1 – that occurring in front of an expected big harvest. All-in, corn stocks are more than ample and will pressure both futures markets and local basis for the foreseeable future. 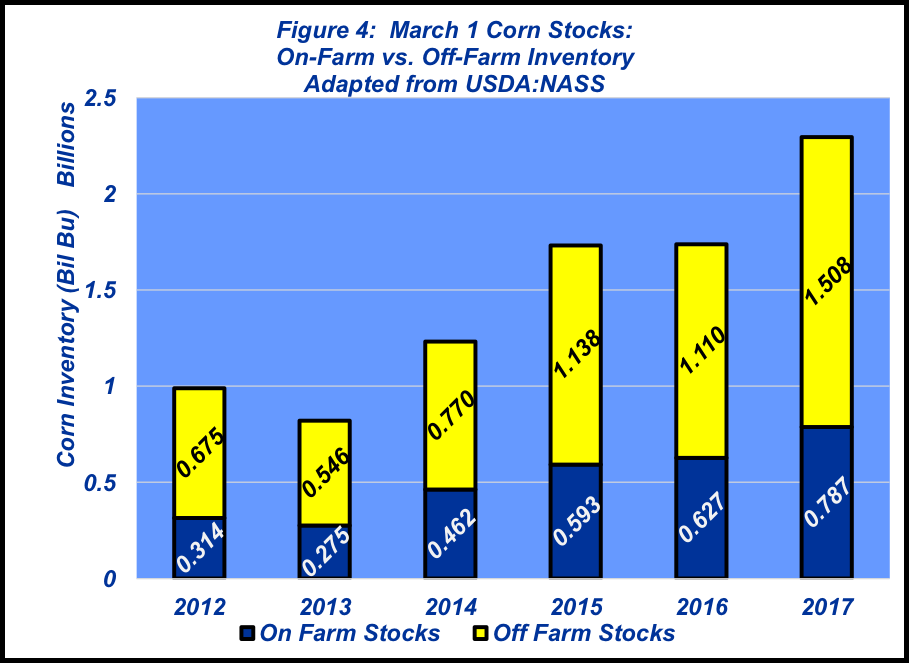 Whatever the market, the on-farm storage trend is an important indicator relative to agriculture. It underscores that farms are getting bigger, are increasingly attempting to be price-makers and using any and all tools to improve their marketing precision.

That underscores the importance of managing business risk that comes in many forms. Producers are encouraged to understand all the potential factors of risk. Therefore, this column always urges readers to be purposeful about obtaining objective, qualified information and practicing discipline to analyze that information. Making all that happen helps to ensure the likelihood of making favorable decisions going forward.