At the same time, production benchmarking will also identify areas of potential weaknesses in your herd. These are areas where you can then focus your limited management time for improving production next year and the years that follow. Some weaknesses take multiple years to overcome. Your goal should be to have all weaknesses removed by the next peak in the long-run beef price cycle.

CHAPS 2000 is now being used in several states across the country. I am going to focus on only a portion of the Northern Plains data base (Figure 1). 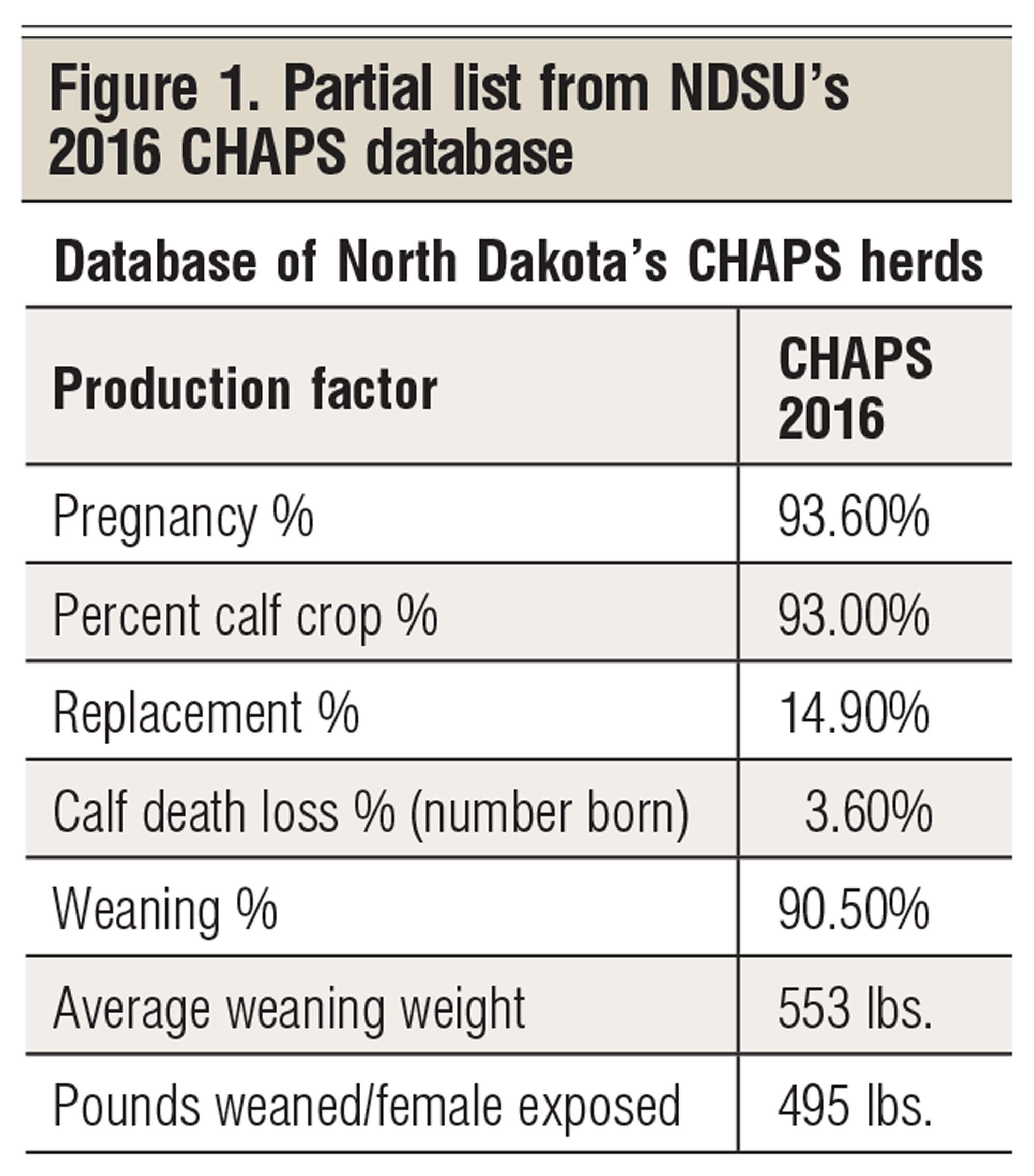 Key points that any producer needs to remember when conducting a comparative analysis:

The motivation for doing these four steps is that as weaknesses are removed, profits tend to go up.

Figure 1 presents the breeding herd portion of the complete NDSU CHAPS database. This is taken from the 2016 edition of the expanded database. This part of the database deals with reproductive efficiency of the beef cow herd, which is based on the number of females exposed at bull turnout time.

It turns out that the number of females exposed last year is not an easy number for ranchers to come by, because animals are exposed in one year and the calves are weaned the next year. The national Integrated Resource Management Standardized Performance Analysis (IRM SPA) guidelines suggest that production efficiency should be measured by the SPA Adjusted Females Exposed calculation.

This national IRM-SPA guide allows producers to adjust the females exposed for why cows were culled; for purchased females; and for the sale of breeding females. The SPA Adjusted Females Exposed seems to be the most difficult number for ranchers to come up with when analyzing their beef cow herd.

Figure 2 is a simplified worksheet designed to help producers calculate the standardized SPA Adjusted Females Exposed. In summary, you need to quantify the number of females culled from, and the females added to, the breeding herd since bull turnout two years ago.

For your 2017 benchmarks, this is the count of breeding females removed or added since bull turnout in 2016; yes, 2016. Add in the breeding cows purchased and subtract out the bred females sold before weaning. Do not subtract out the open cows identified at preg-check time!

Let’s look at some specific equations designed to help you calculate some critical benchmark values for your herd.

Percent calf crop: The primary reproductive efficiency measure suggested by the IRM SPA guidelines is the number of live calves weaned, based once again on the SPA Adjusted Females Exposed. The formula is:

Pounds of calf weaned per female exposed: This is the most important number statistically from my IRM studies that you can measure on a herd. The CHAPS database average is 495 pounds per female exposed. North Dakota’s Farm Business Management 10-year (2007-2016) average of 1,050 herds is 492 pounds. My 1990-2008 IRM Database study indicates that the unit cost of producing a hundredweight of calf goes down as pounds weaned per female exposed goes up. The formula is: 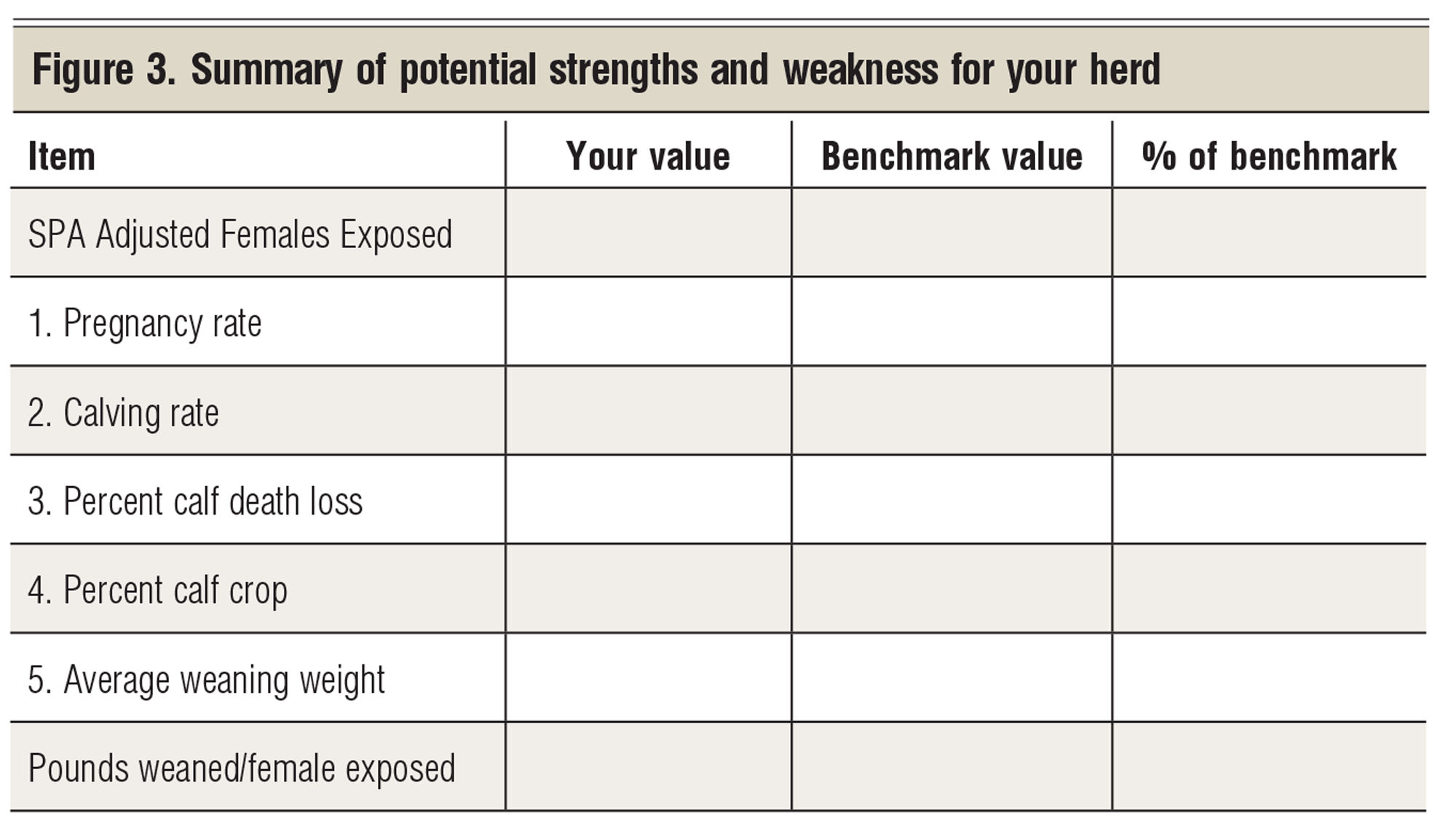 Remember, you as the manager have the final say on what your herd’s strengths are, and what its weaknesses are. Benchmarking is only the management tool — albeit a powerful management tool.