BeefTalk: When Dry, Focus on Heifers and the Young Cows

Cattle management during drought is about minimizing herd total weight to match the available forage while maintaining calf numbers. 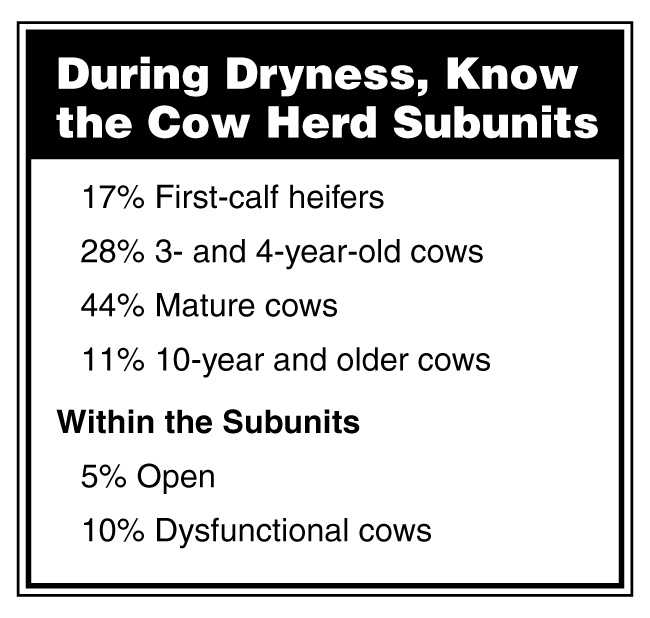 Beef production has one fundamental principle: We live and sleep with Mother Nature, so we need to listen to her.

Cattle management during drought is about minimizing herd total weight to match reduced forage while maintaining calf numbers. As we enjoy a cup of coffee with Mother Nature, we need to listen because we really do not have much we can tell her.

Sure, we try to trick her with elaborate devices and things to ward off the effects of crossing her, but in the end, Mother Nature has the final say.

Perhaps we still have the lingering thought that, ultimately, we will have the final say. We can distance ourselves from Mother Nature with more supplies and inputs. Or we can sit back, listen, evaluate and then move modestly forward using technology, which is good but not the means to the end.

As cow-calf producers facing another dry year, our management options will not be found in a bottle on the shelf. Rather, a thorough review of the herd and a good understanding of the biological needs of the cow are in order. The goal: Set the total weight in pounds of cow that can be grazed on the land available according to proper stocking rates for dry conditions.

Stocking rates should be adjusted earlier rather than later. Remember, a decrease in total pounds of cows turned out to grass or decreasing the grazing days are options to maximize the number of calves.

What do we know? We know lighter cows eat less feed. We know in the early and middle third of pregnancy, cows require a lower quality of feed. We know cows in the last third of gestation eat more feed. We know lactating cows need more feed, generate more waste and require more bedding.

Mother Nature simply smiles and notes that through time, animals have evolved to match their needs with seasonal forage availability. What does that mean? Maybe now is a good time to ask oneself: Is the cattle operation in sync or am I forcing more inputs to offset the impacts of Mother Nature?

Interestingly, when the operation faces managerial challenges, producers are forced to look at the operation in ways that are not in the historical operating manual. That is not always bad. Producers have the choice to do what they want, but the question of inputs always will be on the table. At what point do the inputs outweigh the outputs?

That seems high, but nonproductive, open cows, cows that lose their calves, along with the natural aging process of cows, take out a significant number of cows. In dry years, all these cows need to go earlier rather than later. Operations have no opportunity to graze dysfunctional cows.

In addition, as cows calve or before turnout, mark or pen those cows that need to go. All cows are not equal, not so much in what they produce but in what they weigh. Younger cows weigh 100 to 150 pounds less. Consider keeping younger cows because, as they grow, the young cow has a lot of flexibility as to when she will reach her mature weight.

When rain arrives, these younger cows will be ready to continue producing. This allows one to stock cows within the desired total herd weight and yet keep up the number of cow-calf pairs.

If that is not enough, plan to keep more heifers and dip into the heavier mature cows. Sort off the excessively large cow-calf pairs and market or move them to a region of the country that has the feed resources to support their weight.

In addition, the cow-calf enterprise generally has an approximately 20 percent replacement heifer rate. How about keeping more of the heifers and breeding them, and selling more of the older cows?