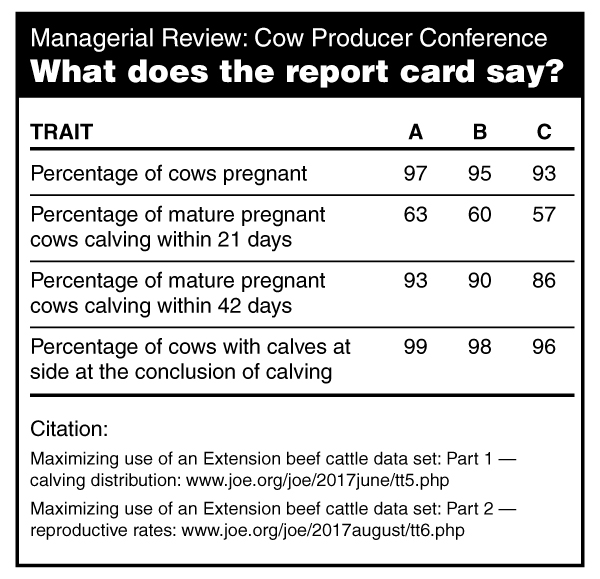 Spring calving is a good time to grade your operation’s management efforts.

Spring calving time is the most intense time in cattle operations.

It also is the time to “grade” the managerial success.

In school, we knew very well where we stood. If not, the pending parent-teacher conference refreshed one’s memory. An “A” was good, a “B” was noticed and a “C” meant average. A “D” or an “F” had consequences.

So how is our agricultural management report card? This means some assignments and grades.

In the cattle world, calving time is an easy time to gauge if the year’s management effort was successful. The test is fairly simple once the numbers are written down. These are not complicated numbers but some simple numbers.

Let’s focus on the number of mature pregnant cows in the calving pen. I am going to assume open cows are not in the calving pen. First-calf heifers often are exposed to bulls early and generally are handled differently, so we will not count them, either.

First, let’s set the grading curve. For our purpose today, I will utilize the 20-year average values for the traits of interest from data processed through CHAPS (Cow Herd Appraisal Performance Software) through the North Dakota Beef Cattle Improvement Association in cooperation with the North Dakota State University Extension Service.

The trait average will be a “C” grade. The “A” and “B” grades are arbitrary but attainable as one scrolls through herd records. Starting with the percentage of cows calving in the first 21 days of the calving season, the “C,” or average grade, would be 57 percent. Or put another way, if 100 mature cows were in the pen, 57 would have calves at their side within three weeks of the start of calving.

The “B” grade would be awarded at 60 percent and the “A” grade at 63 percent. The option always exists to retake the test at a later date.

Next we can count the number of mature cows that calved within 42 days (six weeks) of the beginning of calving. In this case, a “C,” or an average response, for the number of cows that calved within 42 days would be 86 percent. If 100 mature cows were in the calving pen, 86 of them should have calves at their side within six weeks. The “B” grade would be awarded at 90 percent and the “A” grade at 93 percent.

The number of cows that calved and have a live calf at their side is the next test. Again, focusing on mature pregnant cows, let’s start with a “C,” or an average response. Average would be 96 percent. Again, if 100 mature cows were in the calving pen, 96 of the cows should have live calves at their side at the conclusion of the calving season. The “B” grade would be awarded at 98 percent and the “A” grade at 99 percent. Just a side note: Cows without calves should be moved to the market pen.

Now, these three traits should be combined with last fall’s evaluation of pregnancy percentage in the herd.

Again, let’s focus on the herd pregnancy percentage of mature cows. Let’s start with a “C,” or an average response. Average would be 93 percent. In other words, if 100 mature cows were exposed to the bull, 93 cows will be in the calving pen.

The “B” grade would be awarded at 95 percent and the “A” grade at 97 percent. If the cows were not pregnancy checked in the fall, then the number of open cows should be counted in the spring after calving and backed out of the count of total cows calving.

Do not be disappointed with a “C,” but rather review managerial efforts that might move a herd into the “B” or “A” category. And if you are not on the grade rooster, you should undertake a serious review of the cattle operation.

The truth is, you can do what you want once out of school and free of the tutorial guidance. However, your efforts should meet your herd goals and rest somewhere within the normal operational principles for animal husbandry.

Keep in mind, the fundamental principle for the cattle herd is to contribute to the cost of family living above the cost of cow living. Input costs as they relate to output generally guide the commercial cattle operation.

For the average cattle producer still in business, the assumption is that the cost of family living was met. Searching for a new tweak or opportunity should be the core agenda, whenever management is up for review and, we hope, adding some extra money into the family living category.

The bottom line: These four basic traits are the foundation for discussions that review the management of the cow herd. Before calving memories are lost, take some time to have a cow producer conference. Invite some friends, review the records, get some input and make some positive changes for the family.