Make sure cows are in good condition so they can rebreed. 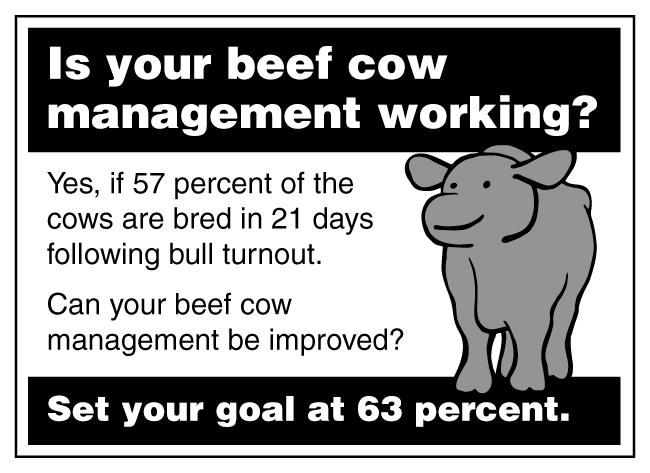 Are the cows ready to breed, and will 60 percent conceive a calf within 21 days following bull turnout?

In reality, cattle never should be out of shape for breeding. Weather and feed supplies always should be managed so animals are in good condition. The important point, however, is to know where the cattle operation is at, avoiding unforeseen disappointments next fall.

Let’s talk about cows. Typical 1,300-pound cows consume 25 to 30-plus pounds of dry matter a day, depending on the stage of pregnancy and milk production. Dry, pregnant cows will be at the lower end of total feed needs. Lactating cows may very well exceed the upper end.

Remember, as cows climb the body weight ladder, to 1,500 to 1,600 pounds, they are going to need 25-plus percent more daily dry matter. Cows with access to enough daily dry matter of good green grass generally will maintain a good condition. Those cows that do not should be moved to the market pen.

A basic management premise is that the cattle in residence within the herd should meet the environmental challenges of the cow-calf enterprise setting. As a producer, if one looks over and sees some “ribby” cows, or those that are obviously thin or pretty hard to the touch, some sorting might not be a bad idea.

You even may want to start an early market beef pen. These cows could be early weaned midsummer, and the cows could be sent to town while the calves are left on grass.

Given the perplexity of weather, the ability to decrease the stocking rate to preserve forage for the productive cows always needs to be an option. Condition scores lower than a 5 require a second look; rebreeding flags pop up if the scores are lower than a 4.

Every herd has an occasional thin cow, but that should not be the norm. And if the norm, then some serious consideration of alternative cow types should be placed on the discussion table.

Keep in mind, rebreeding cows is a function of the time from calving to bull turnout. Assuming a gestation length of 283 days, you have an 82-day window to prep the cow to rebreed and conceive a calf for next year.

As body weight and condition decrease, a cow will not resume reproductive activity until she can replenish her body’s needs while feeding her calf. Even within a well-conditioned cow herd, 1,300-pound cows normally will lose weight and body condition following calving and early lactation, so now is not the time to add nutritional stress.

Research at the Dickinson Research Extension Center shows cows easily can lose almost 5 percent of their body weight in early lactation. Various studies reveal one body condition score is equal to 60 to 80 pounds, the typical early lactation and calving weight loss we see at the center. Given the weather challenges from April, seeing cows that have dropped in condition if nursing a calf should be no surprise.

Let’s take a managerial timeout from a producer perspective. Cows this time of year should be in suitable condition. However, if cows are losing condition, the current nutritional protocol is not meeting their needs. The cows are milking more than predicted or the environment is rougher than thought.

So, back to the original question: “Are the cows ready to breed?” Well, with cows heading out to grass at a proper stocking rate, the cows will do what they need to do. And quite remarkably, cattle do well.

But still, if cows are thin at bull turnout, maybe that would be a good time to rethink calving time. This is an opportunity for a big-picture look at the operation. Will the cows keep a 365-day calving interval? Are cows recovering from calving, starting lactation and cycling, all within 82 days?

The answers will be available in the fall at pregnancy checking time, but the expectation is that 60 percent of the mature cows should be pregnant in the first 21 days of the breeding season. And the managerial goal through time would be to boost the first-cycle pregnancy rate to more than 63 percent.

The bottom line is that cows need to be ready to rebreed before calving, but in reality, this year’s breeding success already has been determined. If the percentage of mature cows calving is lower than 60 percent during the first 21 days of the calving season or lower than is historically normal on the operation, make a big note to revisit this issue in the fall when cows are prone to adding condition.

Several managerial options exist that can refine the environment cows live in, but they come with an expense. Through time, cows need to fit their environment. The best indicator is the percentage of cows maintaining a 365-day calving interval, or simply count the number of cows bred in 21 days. If 60 percent of the cows are bred, management is working.

A closing thought: Delaying bull turnout would allow cows a one-time opportunity to make up lost condition and move calving later. That’s something to think about.